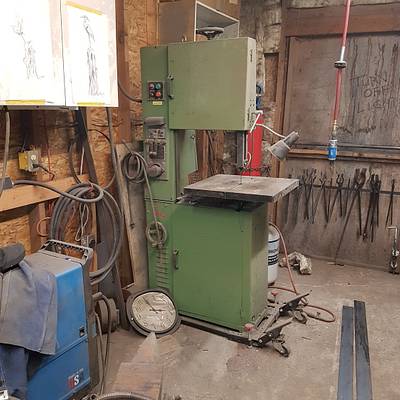 There are no manufacturer tags that I can find but it is an upright, variable speed, 18" metal bandsaw. It came from England originally and the previous owner swapped out the motor to have it run on 220v single phase power. It has a built in blade welder/annealer which works but I haven’t mastered a decent weld with it. It is made from heavy cast, and weighs around 800 lbs. The upper cast had a large repair in it which is why I was able to purchase it for $0.10 on the dollar. Has worked fine though and I’ve had it for about 8 years

So cool you expanded out of woodworking only! This is a public art piece I’ve...

This was my very first metal piece. I had just picked up a welder and created...

An organic guardrail and handrail from a 3 or 4 years ago. I was...

One of my favourite metal pieces. I endeavored to capture the fluid movement...

Project from a couple of years ago. 6’ wingspan and the post covered an...

This piece was commissioned to represent the Harewood area of Nanaimo. It...

And the saw weighs 800 lbs so I only used that cart to get in position and to service the saw. That cart is at max capacity! haha

Yes, the light is attached. If you zoom in just below the switches, there is a clamping system as well as welder/annealer. Designed so that if you buy blades by the roll, you cut it to length, clamp it that little jig, anneal and weld all with the push of a button. I’ve got it to weld but haven’t perfected a decent weld with it. There is a certain time that is has to be annealed etc in order to work properly. I only go through a couple of blades/ year so I just order them already welded

Question: is the light attached to it? That would be handy!

Super deal !! And I love that you have it on one of those movable cart thingies (is that a technical term?)