Roy Underhill and I will be sitting down together in front of the audience at Woodworking in America, to talk about all sorts of interesting behind-the-scenes stuff. What would you like to know? What would you ask him if you had the chance? Would it be something about his early years at UNC and Duke? How he got interested in Woodworking because of his sister? Why he chose to get a degree in theater? Would you like to know about how he lived in the mountains with a back-to-the-earth sort of group in the 70’s? What about the time he refused to take “no” for an answer about starting his show so he carried an ax into the PBS offices? What about the time he made a rocket powered skateboard that attacked Washington DC? Roy has a story that a lot of people have no idea about, and it’s really fascinating!

So, give me some ideas. Maybe I’ll get him to talk about it. I’ll have it recorded and try to work out a way to get it online for those who can’t make it. If you are going to be at WIA, you can come see us at 11:00 on Saturday in the “Tool Talk” stage. You only need the $10 admission for this, not the full conference pass 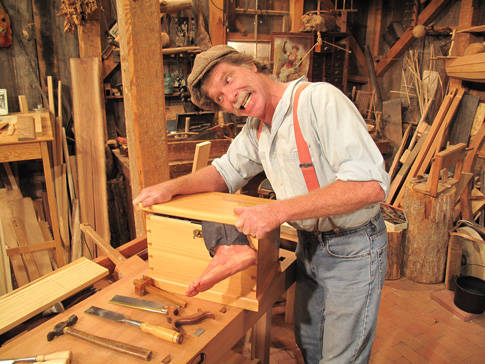 Cool woodworkers get their woodworking videos, articles and entertainment at Stumpynubs.com