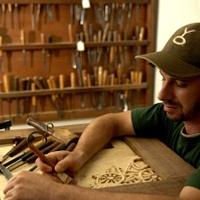 Eric M. Saperstein is Master of Artisans, Owner, Webmaster, Editor, Bookkeeper, Buyer, Office Manager, Legal Pit-bull, and he’s in charge of vacuuming the shop. The operational functions of furniture design, construction, and finishing as well as antique restoration are all in his daily activities.

Eric started in woodworking around the time he started to walk, finding himself spending time in the shop with Stanley throughout his childhood. Eric could handle most common tools and even operate most of the power equipment by the time he was ten years old. As a teenager he absorbed more than his father thought as he provided a second set of hands in the shop.

Eric took over Artisans in 2000, expanding the array of services and exponentially increasing the marketing presence by creating a website, www.artisansofthevalley.com The site took on its own life and is now the largest single shop woodworking website on the internet.

The web presence allowed Eric to begin to reach a much wider audience, so the reach of the shop began to extend not only across New Jersey and into Pennsylvania, New York and Delaware, but soon projects were spanning out nationwide. We now even ship custom commissions around the world.

Eric received his master’s certification from his father, Master Craftsman Stanley D. Saperstein, in 2008. This fulfilled Stan’s promise to his teacher, C. N. Grinnell and ensured another generation of master craftsmen was created.

We've launched a blog site (www.artisansofthevalley.com/blog) in March of 2009. The site will feature artists of all sorts in all mediums, as well as our own work, hobbies, adventures, and other unique articles and tech tips. Soon we're hoping to launch our forum (bulletin board) as well.

You can reach Eric at: eric@artisansofthevalley.com