225 views
17 replies
If you came from another site where there was a similarly named thread, this one is slightly different.

Let's talk about kerfing planes/saws. Their history, form, and function.

I will go first:

I think the earliest examples as a dedicated tool date back to 19th century coffin makers. I tend to think of any tool that straps, bolts, or otherwise affixes a saw to a reference as tools for precision-work. I think we can see that in the creation of stair saws where the goal is to make the cut square, true, and perpendicular to the stair. I think the coffin kerfing plane (rather large by the standards of any kerfing plane made today) indicated that the coffin maker had demands for fast but accurate work (nobody wants their loved ones buried in a shoddy coffin even if it is hastily made -- and surely no one carrying a coffin in the 1800's wanted that coffin to be made so poorly as to fall apart in transportation). This implies to me that whatever the tool involving a saw-on-a-reference, that said tool exists when the work calls for it.

I make this distinction because I have observed some popular folks lately talk poorly-of the kerfing plane in its mediocre rise to a quaint oddity in the recent woodworking realm.

You probably have never even heard of such a thing. Well, it's basically what would happen if a stair saw and a plow plane had a passionate night of regret. It has a fence like a plow plane (though some argue it is optional, I saw that makes it a stair saw), but a saw blade.

ASIDE: I could be wrong, but if you drop the fence from a plow plane, it becomes a shoulder or rebate plane. Also, let's not dissect it by discussing moving-filletster planes or specialty sash planes. A kerfing plane is like a plow plane. Let's just leave it at that.

As for function, anytime you need to do something with precision wherein a thin groove of a saw is better suited for the work is keen for a kerfing plane. Well, I think so. We can disagree -- as many have stated into the void of the Internet to their adoring audiences that a kerfing plane is slower than a skilled hand freely wielding a hand saw. Perfectly valid, but I simply argue that it varies both by person and task.

You could conceivably rabbet out a hunk of wood and keep it instead of using a shoulder plane to drop a rebate on a panel for example. In fact, another name for a kerfing plane is a rebate saw. Remember, it's just a saw with an attached reference. We can call it a name based on what it does (cut a rebate) or we can name it based on what it produces (a kerf). Jury is still out on "saw" vs "plane" I think.

If you've made it this far, congratulations. This is where I also divulge that I am 75% of the way into producing my own kerfing plane of my own design. I will spare you the gory messy details that led up to this point and this thread should just chronicle the last few hurdles. However, I don't want to dominate this thread. I want this to be anyones thread. I will limit the posts about my own kerfing plane to weekends (but don't sue me if I get excited after performing a step or make a colossal blunder and have to post it).

Eric - the "Loft" replied about 2 months ago
You are on a mission Devin, keep it up.

pottz replied about 2 months ago
glad your bringing it over,but probably not the entire thread girl,it's over a year long and hundreds of posts. 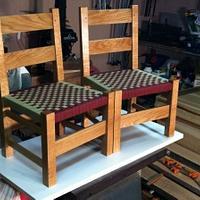 Old Flatulent Individual replied about 2 months ago
I kept it simple. Used Blackburn Tools plan along with their blade kit and added a fence from a mortally wounded plow plane. The blade is sized the same as my Roubo 40” frames saw so the kerf is perfect.

DevinT replied about 2 months ago
Can someone confirm for me that recent YouTube arrival below and aforementioned Blackburn Tools are one and the same?

DevinT replied about 2 months ago

but probably not the entire thread

Old Flatulent Individual replied about 2 months ago
Devin, they are not the same. Isaac Smith is the man behind Blackburn Tools.

DevinT replied about 2 months ago

they are not the same


Oh, sheesh! I had thought they were the same. Thanks for preventing me from making a fool out of myself (with respect to this, there are plenty of remaining opportunities)

DevinT replied about 2 months ago
Happy Monday! It's another wonderful work day.

RyanGi replied about 2 months ago
Always an adventure!

Eric - the "Loft" replied about 2 months ago
First of all, take all of the knifes from the staff.

Eric - the "Loft" replied about 2 months ago
Funny, Kevlar with a Trama plate.

DevinT replied about 2 months ago
I never know who has shared interests until I start sharing what interests me. I would like to share some photos and videos of interesting kerfing planes that I have found on the Internet. Lucky for us there are not as many kerfing planes as there are hand planes, braces, or saws. However, I think it would be interesting to just see what folks thoughts are on the span of designs.

DevinT replied about 2 months ago
The Luban 043 plough plane only available to the United States as an import seems to do right by some woodworkers but others have mentioned that it is a tad small. We can see images of it being driven with the palm of the hand instead of fully gripping the diminutive handle. We can also see that perhaps the intent is to keep a 3-finger grip in the handle with a thumb on top and pinky finger left out.

DevinT replied about 2 months ago
Woah, not sure how I missed this, but in 2015, Tom Fidgen made a bridle kerfing plane

RyanGi replied about 2 months ago
How did you miss that?? It was in all the papers 😜