Crazy Stuff Stumpy Thinks About #1: One man's artsy is another man's fartsy...

READ THE REST OF THE ARTICLE BELOW- OR OVER AT STUMPYNUBS.COM WHERE THERE ARE ADDED PICTURES AND STUFF (INCLUDING MORE USELESS WOODWORKING ART)… YOUR CHOICE… 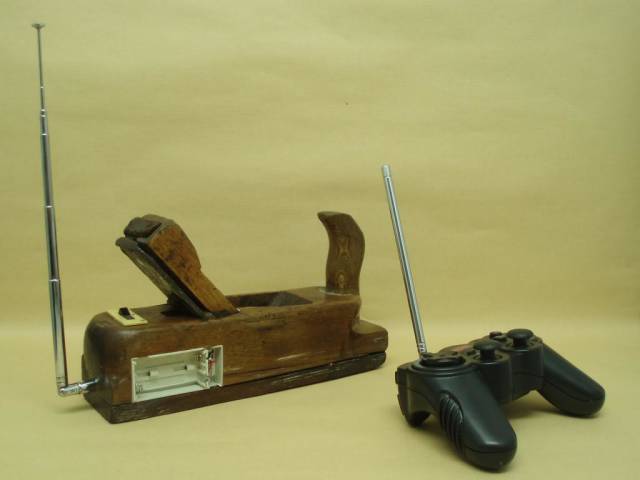 A Bulgarian genius (and I use that term loosely) developed the “remote controlled hand plane”. I imagine his process was simple, find a few bits of junk, stick them together and see who falls for it. Of course he couldn’t have expected anyone to actually believe he was selling a genuine woodworking tool. Woodworkers are far too smart for that. No, his target was obviously the more discerning buyer. You know the type, they live in big city apartments full of uncomfortable European furniture made from stainless steel and plexi-glass. Their walls are covered in large canvasses with one tiny spot of paint in the center and a dirty soup can carefully mounted in a shadow box rests upon the mantle. They drink cappuccino from tiny cups, they eat only kale and hummus spread on leafs of kale. An evening out always includes a visit to a gallery where they look past their upturned noses, reading some hidden meaning into a particularly breathtaking modern piece. Then the janitor comes and empties it because it’s really nothing more than a waste bin, but even that is somehow daring and audacious. Someone taps on a wine glass to smugly announce the opening of the newest exhibit, and everyone crowds around the remote controlled wooden plane. Whispers float about the room.

“Intrepidly bold!”
“See how the batteries speak to the hidden power of the underclasses…”
“Rash and insolent, yet wonderfully cheeky!”
“I heard this same artist also made a plug-in hammer!”
“Recklessly daring!”
“Clearly a statement about the social plight of sociological society…”
“Really, aren’t we all just old TV antennas in the grand scheme of things…”
“What the heck is this crap?”
“Who let that simpleton in here? Call security and get me another Bordeaux.”

Meanwhile the “artist” is counting his fat stacks and looking through the bathroom trash for his next inspiring piece.

Perhaps I go too far. After all, art is in the eye of the beholder. But I was an artist before I became a woodworker. I painted portraits in oil that actually included two eyes, a nose and a mouth. I sculpted in wax and clay and alabaster, and when I was finished you didn’t have to spend an hour gazing thoughtfully in order to interpret its hidden meaning. If I wanted to paint a bowl of fruit, I painted a bowl of stinking fruit. I didn’t haphazardly fling pigment onto an old ceiling tile and call it fruit with a hidden message about Darfur. Perhaps my work wasn’t very good, after all nobody ever called it “edgy”. But I believe it took some amount of talent to create, and that’s what made it art. When you start calling anything art, everybody becomes an artist. I’m sorry, but if anybody can create it, where’s the value?

It’s the same in the woodworking world. Some woodworkers are artists because they can do things few others can. Others, myself included, are craftsmen- and there’s no shame in that. If I build a chair, it’s a chair. It’s not art. If I create a truly unique design that nobody else has tried before, or if I build something flawless and inspiring, then I would call it art. I don’t know, maybe I’m old fashioned. I just believe that putting something in a jar of urine or letting my bed sheets stagnate for a year (both are recent exhibits in NY), or even gluing a power cord and a USB stick to a yard sale find and calling it a wifi-level is something else entirely. It’s a con, an April fool’s joke, and those who consider it otherwise are the biggest fools around.

…Oh, and for those that were asking to see some of my past “art”, here’s one of the few I still have. It’s a pointillism version of the famous “Migrant Mother” portrait from the great depression era dust bowl. It’s made up entirely of tiny black dots. It took me over a year and a dozen black pens to create. It may not be the most beautiful thing in the world, but at least nobody will mistake it for a garbage can. 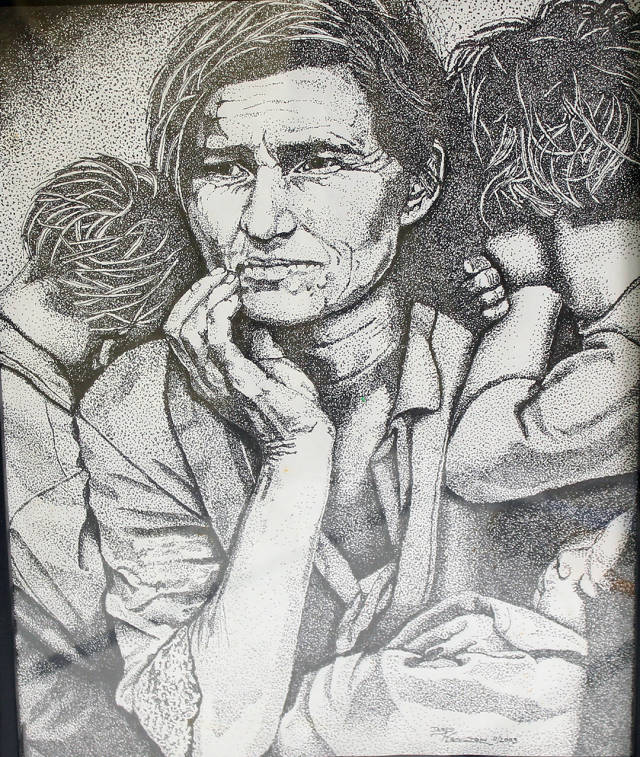 View all parts of Crazy Stuff Stumpy Thinks About »

No, I did my research. The creator is not making a statement about woodworking tools, or woodworking at all. He makes a lot of junk like this, most having nothing to do with woodworking tools. He considers it art and tries to sell it for big money. Not sure he’s ever made a sale, but he’s definitely not doing it in jest.

The fact that some are finding a “statement” in it is perhaps evidence that it is a type of art, if only in that it gets people thinking…

Is the creator having fun and we are the source of his entertainment? Are we in fact, giving him exactly what he wants? Or… is he making a statement about just how far out of control tech has gotten? Look at Wired Magazine ten years ago when a highly respected women in the mental health field was featured on the cover. She claimed the dawn of new and exciting future in tech comms. Now ten years later, she’s back on the cover saying “it’s the biggest mistake ever”. She is talking about the social media. Tech has gotten out of control. Who’s to blame? We are, I’m sorry to say as I type away.

This plane and remote control kicked around Ebay for a very long time, being relisted over and over. Somewhere, the artiture gods are laughing.

While I am definitely not into art collecting I couldn’t fail to see the humor in this ‘remote controlled’ hand plane which can also be a wry comment on the state of things in the woodworking world where people are selling woodworking gadgets even more ridiculous than that hand plane, and frankly Stumpy I would have thought you would have too.

Thanks for sharing. When I hear the word “art”, I cringe. It reminds me of the anti-war riots during college and large paintings that were nothing but one color with a brush stroke of another color.