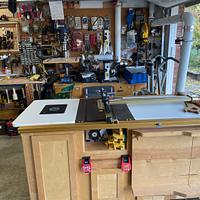 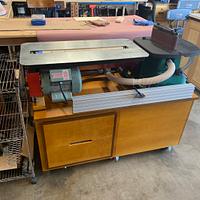 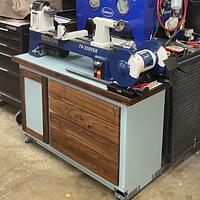 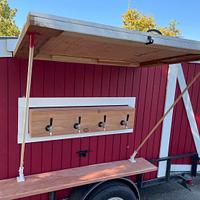 115 views
3 comments
This is the double decker tool box I built as part of a tool swap earlier this year. I laid out several options for this to house several marking tools and a bunch of screwdrivers. Wanting at the same time to keep it compact, but also needing to hold a heavy handful of tools. I also wanted the walls thin enough to be proportional. I settled on a two 'layer' jewelry box. The sides were dovetailed together, and I used the Origin to precisely align and drill out the holes for the soss barrel hinges. This was a bit more of a challenge than I expected just based on the layout needs and relatively thin wall thickness of the box, I also milled aligned holes for magnets to keep the box closed, I think I should have mounted them further towards the hinges, as the box is a bit tough to open! Powerful magnets to be sure!

To build the insert for the marking tools, I traced their outlines onto paper, then colored in the areas to be milled. I took a pic of it, then converted the file to an .svg and imported it to the Origin. From there I milled out the recesses for the tools on a claro panel. It really is that easy. Since the insert is solid wood, and I wanted tight visible tolerances inside the box, I cut back the edges of the insert at an angle to combat seasonal expansion while keeping the tight tolerance where it's visible. I had nightmares of the insert blowing out the sides of the box. The marking tool insert is just held in place with a brass screw from underneath, so it could be removed and changed if the owner so wishes. All the tool inserts also feature magnets to hold the tools in place. For those non metal tools, I milled their insert area shallow so they should be held in place by the lid when it's closed. This is an issue because the box, being two layers, means one half may be open while the other is closed…and that could allow for tool shift. It worked out well. The lid has an epoxy inlay of Jeff's initials, also cut with the Origin, then sanded back. I chamfered the edges to give it some depth and dimension.

I had to assemble and disassemble the box components several times for fit and finish. I really wanted the box sides to align perfectly and, given there are actually two boxes and a lid all working together, that was a challenge…but nothing a hand plane and some sanding can't handle! These smaller barrel hinges were a nice precise, tight fit which became a bit of an issue as I assembled and disassembled the layers for fit and then pre-finish, I ended up tearing out once of them, but it came together in the end. The box interior was pre finished, then the outside was sanded high and finished with friction polish and wax. I opted not to lacquer the box components, as I really like the soft look for this without the lacquer…and it's not going to be handled as much as the tools. I finished the interior with some red felt for contrast.


Ryan/// ~sigh~ I blew up another bowl. Moke told me "I made the inside bigger than the outside".

Eric - the "Loft" commented 14 days ago
Nicely done Ryan, any woodworker be pleased to have received that.

I'm interested in the flat surface you have there, with the t-tracks, can you post a photo and a small explaniation of that, might be a good feature to have in the shop.

RyanGi commented 14 days ago
Eric there isn’t too much to it. It’s the top of my assembly table. I just routed in dadoes and installed t-track. Honestly, it can be a pain. I do use it somewhat often, but the table top isn’t very thick, so some of the screws have stripped out causing the track to lift. I’ve had to go back and repair it a couple times. One section I ended up gluing down. At the ends of each track, I used a forstner to create pockets to allow track devices to be put on the track.

I actually had this setup on my workbench for a while and removed it and backfilled the dadoes with wood strips. Not a good idea for a workbench, especially with hand tools. Fine for an assembly bench if you make sure the tracks are below the table top just a tad.