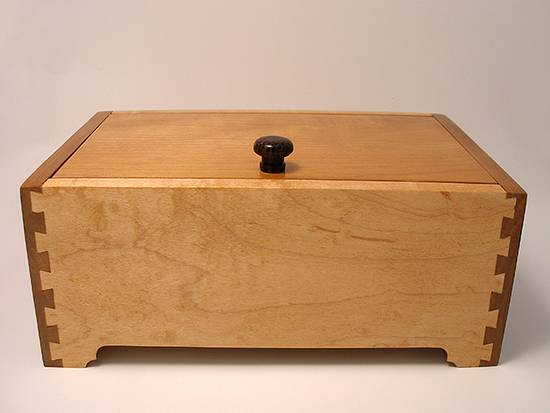 This is another of my gratitude boxes for a friend that, although we had never met in person, was a valued friend on Facebook. When my old pickup gave up the ghost, she was instrumental in her day job as a used car dealer in finding and helping me swing a new ride. Although not new, it was light years better than the rattletrap I had been nursing along. After years of driving a pickup, I switched to a ‘03 Honda Element. Solid beast, with a great deal of versatility and room. Plus it’s AWD, so no more skating around like a pig on ice when the Nebraska weather gets frosty. And did I mention it has a sub-woofer among it’s eleven speakers. Kick *ss!
Anyway, back to the matter at hand. Box is approx. 11"x 9″×5.5″. Front and rear panels are soft maple with a hint of curl and birdseye figure. Sides are cherry, top is bigleaf maple. Tray is made of purpleheart and beeswing figured sapele. Curly maple bottom. I made a handle on the front edge so it can be easily hauled out from under the captured lid.
I lined the box with Spanish cedar, as is my wont – smells heavenly when opened after the box has been sitting a bit.
Half-blind doves on the carcase, box joints on the tray – all on the Incra Jig Ultra augmented router table.
Finish is washcoat Garnet dewaxed shellac under Target Coatings EM6000 waterborne spray production lacquer, rubbed out to 2000 grit with Abralon pads.
For my sister-from-another-mother, thanks for all you do for all the folks that wander into your life.
Not all who wander are lost.

Boxes are a fine gift. So many styles, uses, and periods. And all are addictive. Good to see more boxes going out there to people who appreciate them. Many of us begin making simple boxes, then discover that there are layers upon layers of complexity in this simple genre. My compliments.
Roger