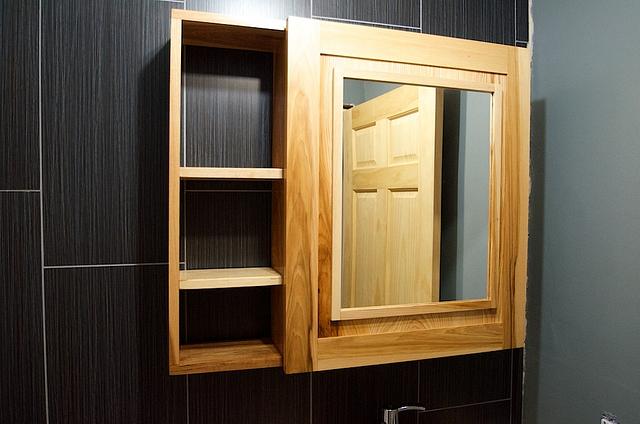 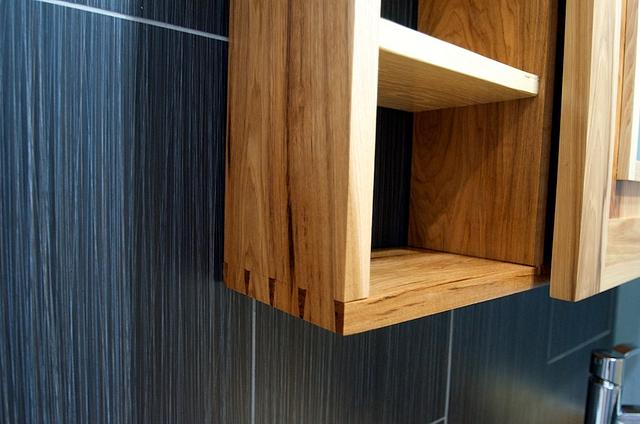 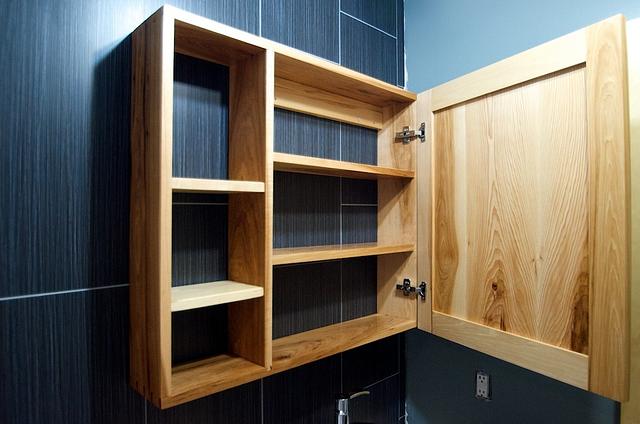 This was a particularly troublesome attempt at updating an old, particle board cabinet that was in my bathroom. I decided to use hickory; my parents have hickory kitchen cabinets that look great; I’d never used hickory before and had no concept of just how hard of a hardwood it is. The wood was difficult to plane/saw/chisel/sand and tore and chipped like crazy. I’m not going to be too quick to use hickory again!

I painstakingly laid out the carcass for assembly after cutting the dovetails and the stopped dados for the shelves; the open shelves on the left were meant to have the bigger shelf at the bottom and the smaller at the top, however after I did the glue-up I realized that I somehow got one of the pieces backwards…the option was to completely start over or live with an unintentional design change. If I’d have had to started over I’d have probably put the project in a corner and not ever finished it so I decided to live with the somewhat awkward looking design change.

The door was meant to have a nice beveled glass mirror, however this proved nearly impossible to find in the dimensions I needed it, nor would any of the custom mirror companies online ship to Canada. So, I bought a cheap mirror from the BORG that roughly had the correct dimensions, tore off its particle board frame and used it instead. Had to make a frame for it because the mirrors edges were rough. Again, not the design change of choice but of necessity.
Finished with 4 coats of Minwax “tung oil” and 5 coats of wipe on poly.

It’s stunning. Interesting about the hickory. Looks great but I suspect I’ll keep it at a distance for now.

Thanks! Just in the process of finishing up a matching vanity out of hickory and then I’m not going to be too keen to use hickory again any time soon.

Wow! That wood has a lot of character. Nicely done.

Nice looking cabinet and I agree hickory is hard and challenging to work with .
I have some on hand and it gets used for tool handles as it is the perfect wood for that use .