A Recent Example of What I Do
Russel Trojan 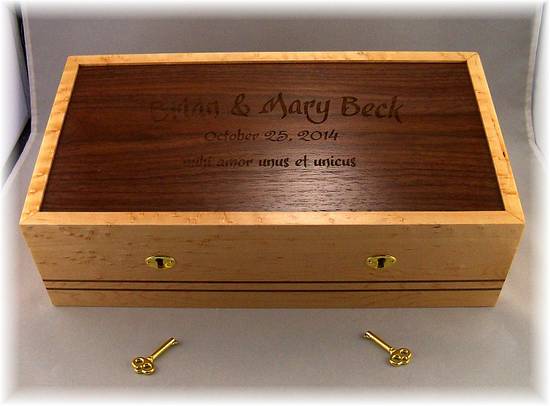 I have a bunch of nieces, and within the last few years they have all gotten to that marrying age. As a result of that I have been informed of a rather new trend in weddings. It is known as the Wine Box Ceremony.

Prior to the ceremony the bride and groom write letters to each other and seal them (not to be read).

During the ceremony, a bottle of wine and the letters are locked in a box and the box is put away until a predetermined anniversary; some say the first, others the fifth, and some say even the tenth. There’s no rule. On the specified anniversary, the box is opened, the letters are read and a toast is made to their success. This process can be repeated for multiple anniversaries thus producing a time capsule of the marriage.

Well, a young lady asked if I could make her one and was very specific about how she wanted it. She also wanted a matching ring box and tray (rather than a pillow for the ring bearer). So here is the wine box, ring box and tray.

Made with Birdseye Maple and Walnut. And after making hundreds of boxes, this is my first attempt at full mortise locks. (Don’t tell anyone, but I cheated). Also, while I do own a small CNC machine for minor engraving, the top was done by some friends of mine who do laser engraving and is much more precise than my CNC.

That’s a great set.
I love the story about the wine box; I did not know that.
I also like the double lock. It makes sense.