I have a box of metal and plastic blast gates for four inch hose. I bought them to set up a dust collection systems for my three dust collectors.

I started with the three three horse, four bag collector, which collected dust and debris from: 1) a sanding station; 2) a lunch box planer; 3) an eight inch jointer; 4) a cabinet saw with an over-arm collector and a cabinet port; 5) the lathe station; and, 6) the floor vacuum.

Between the four bag collector and the pick-ups is a Super Dust Deputy, with a six inch line to the collector. Connecting each item to the cyclone via Y’s resulted in a notable drop in efficiency, even with the gates for all but the tool being used closed .

On a whim, I just terminated a hose from each pieces of equipment at the collector and abandoned the Y’s and gates. Instead of opening the gate for the piece of equipment I was going to use and closing the one I’d used previously, I unplugged the hose I’d been using and plugged in the one I was going to use. It took about the same time and effort as opening and closing gates, but resulted in less drop.

In the end, this system works far better for me. Soon, I’ll take a little time out and make a rack for the hose ends, at the collector(s), to make it a little easier to grab them for swaps. 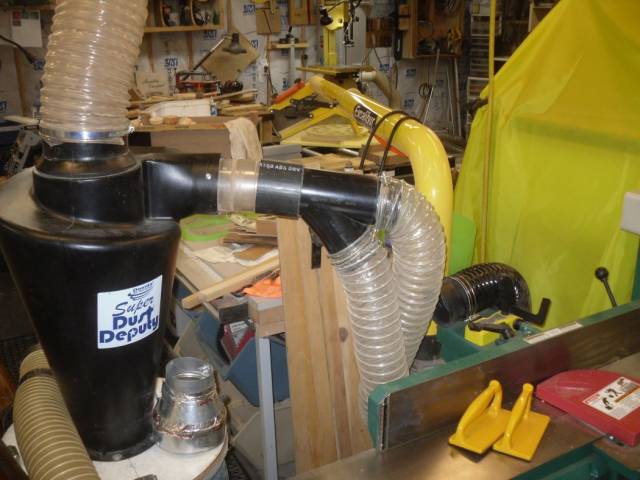 The following was posted on another web site in response to someone who thought I’d have better luck with the gates, if I approached them differently. I’m posting it because I thought it might help clear up why I went this route:

“Keep in mind, this is an ALTERNATIVE and works better than gates, in many instances.

Switching is done at the cyclone, or at the collector, depending on which one of the three collectors is being taxed.

Like most people’s, my collectors are in the shop, so going to Cambodia to switch the hoses at the unit isn’t necessary. Too, keep in mind, most of us are not running borderline commercial units [or better] with eight or ten inch lines branching to smaller lines (I sold my big cyclone because they are not engineered to be turned off and on repeatedly, and I no longer depend on my shop for a living, so my collectors get turned off and on several times a day).

As an example of the use of my three horse, it sits to your back, when standing at the jointer, which is to the right side of the cabinet saw. A six inch line goes from it, overhead, to the cyclone. At the cyclone are the terminations for the two lines to the saw, a line to the jointer, a line for the lathe, a line for the sanding station and one for the planer. I can swap hoses in the same time you can close one gate and open another. (I just use simple, plastic terminations on the end of each hose and they just press on).

To use gates REQUIRES Y’s, each of which compromises efficiency. Of course, the gates contribute to some degree or other too. As I stated before, I used a single line and Y’s, as is standard. Obviously, a gate had to be installed at each Y (not at the equipment). The farther the system progressed, the more the efficiency dropped. Installing [smaller] spiral piping would have improved performance, but come on, it’s a real world out there and my money tree got chopped down, others never grew one.

The improvement difference is enough I vacuum the floor [in about 1/25th the time a standard vacuum would (give or take a bunch of tenths).

P.S. I have one plastic gate, but have never used it, so was unaware they were bad choices. I bought all metal ones because I wanted mileage."