Shortened to Alice in Wonderland, is an 1865 novel written by English author Charles Lutwidge Dodgson under the pseudonym Lewis Carroll. It tells of a girl named Alice falling through a rabbit hole into a fantasy world populated by peculiar, anthropomorphic creatures. The tale plays with logic, giving the story lasting popularity with adults as well as with children. It is considered to be one of the best examples of the literary nonsense genre. Its narrative course and structure, characters and imagery have been enormously influential in both popular culture and literature, especially in the fantasy genre.

Chapter Seven – A Mad Tea-Party: Alice becomes a guest at a “mad” tea party along with the March Hare, the Hatter, and a very tired Dormouse who falls asleep frequently, only to be violently woken up moments later by the March Hare and the Hatter. The characters give Alice many riddles and stories, including the famous ‘Why is a raven like a writing desk?’. The Hatter reveals that they have tea all day because Time has punished him by eternally standing still at 6 pm (tea time). Alice becomes insulted and tired of being bombarded with riddles and she leaves claiming that it was the stupidest tea party that she had ever been to.

Chapter Eight – The Queen’s Croquet Ground: Alice leaves the tea party and enters the garden where she comes upon three living playing cards painting the white roses on a rose tree red because The Queen of Hearts hates white roses. A procession of more cards, kings and queens and even the White Rabbit enters the garden. Alice then meets the King and Queen. The Queen, a figure difficult to please, introduces her trademark phrase “Off with his head!” which she utters at the slightest dissatisfaction with a subject. Alice is invited (or some might say ordered) to play a game of croquet with the Queen and the rest of her subjects but the game quickly descends into chaos. Live flamingos are used as mallets and hedgehogs as balls and Alice once again meets the Cheshire Cat. The Queen of Hearts then orders the Cat to be beheaded, only to have her executioner complain that this is impossible since the head is all that can be seen of him. Because the cat belongs to the Duchess, the Queen is prompted to release the Duchess from prison to resolve the matter.

Most of the book’s adventures may have been based on and influenced by people, situations and buildings in Oxford and at Christ Church, e.g., the “Rabbit Hole,” which symbolized the actual stairs in the back of the main hall in Christ Church. A carving of a griffon and rabbit, as seen in Ripon Cathedral, where Carroll’s father was a canon, may have provided inspiration for the tale. 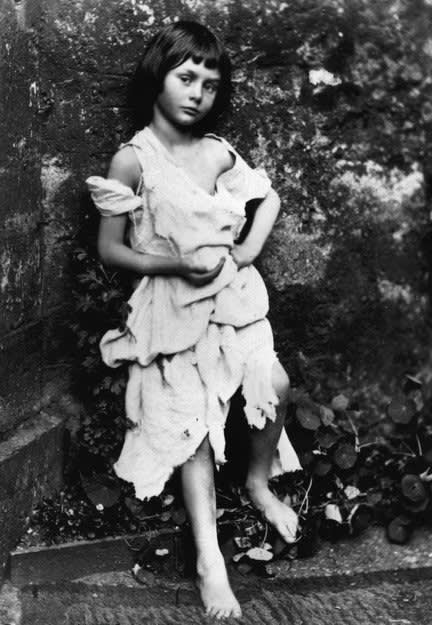 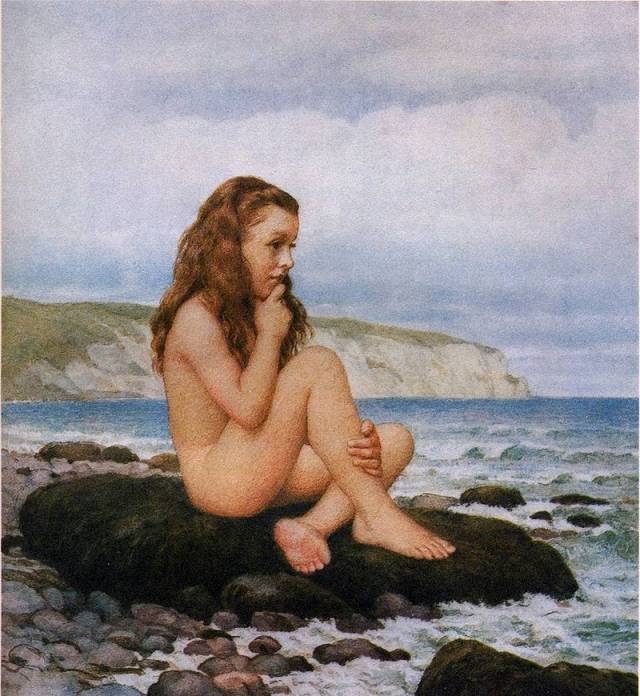 These are photographs taken by Lewis Carroll , one of them has been colorized .

‘We cannot know to what extent sexual urges lay behind Charles’s preference for drawing and photographing children in the nude. He contended the preference was entirely aesthetic. But given his emotional attachment to children as well as his aesthetic appreciation of their forms, his assertion that his interest was strictly artistic is naïve. He probably felt more than he dared acknowledge, even to himself.‘Several other writers and scholars have challenged the evidential basis for Cohen’s and others’ views about this interest of Dodgson. Lebailly has endeavoured to set Dodgson’s child-photography within the “Victorian Child Cult”, which perceived child-nudity as essentially an expression of innocence. Lebailly claims that studies of child nudes were mainstream and fashionable in Dodgson’s time, and that most photographers made them as a matter of course, including Oscar Gustave Rejlander and Julia Margaret Cameron. Lebailly continues that child nudes even appeared on Victorian Christmas cards, implying a very different social and aesthetic assessment of such material. Lebailly concludes that it has been an error of Dodgson’s biographers to view his child-photography with 20th- or 21st-century eyes, and to have presented it as some form of personal idiosyncrasy, when it was in fact a response to a prevalent aesthetic and philosophical movement of the time.
Mrs. Liddell told Carroll that there was gossip circulating about him and the Liddell family’s governess, as well as about his relationship with “Ina”, presumably Alice’s older sister Lorina Liddell. The “break” with the Liddell family that occurred soon after was presumably in response to this gossip.

I saw the Disney movie when I was just learning to write and read . It was
certainly different from the cartoons on TV . My impressions were being
afraid that Alice would get crushed or smooshed or trapped . There were
a lot strange characters saying some things I didn’t quite understand, but they were great . I read the book about three years later.

I am basically going back to review some books from throughout the years
as a basis of creative reflection archeology . So, something old something
new . I have always wanted to make some pipes. My Uncle Walter smoked
a pipe , and told me how to smoke and care for one . My time is growing
somewhat short , so I should make a few .

There we go again back to the library. I should have read this as a lad, but never did. Now, Moment. you have forced me to.