Stumpy's Twigs of Knowledge #1: Rules aren't made to be broken- they're made to measure stuff.

As you know, here at the Stumpy Nubs Workshop we like to bend the rules. Something we even break them. But most often we simply create a nasty kink that forever keeps the darn things from lying flat again. Yes, I am a rebel. But rules aren’t really made to be broken, they’re made to measure things. So quality really matters.

By now most of you have caught on to my little play on words. But for the few still confused, I’m talking about the plain old woodworking ruler, an all too often underappreciated tool. I can understand why you might have been a little slow on the uptake. For one thing, I called them “rules”. That’s a term I had to adopt later in my woodworking career since I grew up calling them “rulers”. But ask an old-timer for a “ruler” and you’ll end up with a nasty welt after he thwacks you on the forehead with his “rule”. So for the sake of this discussion, and to avoid another controversy like the infamous “jig saw”/”saber saw” incident of 2012, I will be using the term “rule”.

READ THE REST OF THE ARTICLE BELOW- OR OVER AT STUMPYNUBS.COM WHERE THERE ARE ADDED PICTURES AND STUFF YOUR CHOICE…

The rule gets a bad rep these days, probably because it doesn’t roll up with the press of a button like the fancy-pants measuring tape. But for true accuracy you can’t beat a high quality steel rule. Yes, I said “high quality”, because not all are created equal. How do you know the difference? Why does it matter? Those are two excellent questions…

Heavy vs. Light: Just like with the people you see every day, you can often judge quality by weight alone. If it’s really light, it’s probably junk. Aluminum and soft steel are popular materials for the type you find in office supply stores, but they won’t hold up in the workshop. Over time and use they will nick or bend. A good rule is made from hardened steel.

Stamped vs. Machined: One of the reasons cheap rules are made from soft materials is that they can be die stamped from large sheets. But a stamped rule creates a problem. The edges are often slightly rounded over, which means the marks won’t always go all the way to the edges. A good rule has machined sides that are square to the face. When you run your finger down the edge it should be sharp, and you should feel the graduations through your pencil when you’re locating your mark.

Printed vs. Etched: Cheap rules have printed markings, and it’s pretty obvious why these aren’t ideal. They wear off over time, for one thing. But more importantly, printed markings tend to be wider, introducing more error into your layout that can add up over the course of a project. Good rules have acid etched markings, which are permanent and much finer than the printed ones.

So, you’ve examined all of your rules, and they seem to meet the standards for quality. Does that make them right for woodworking? Not necessarily. Like any tool, there are different types for different uses. Machinist rules are usually of excellent quality. But the scale isn’t always relevant to woodworking. Do you really need a rule with markings to the 64th of an inch? Do you really need a metric scale? These things can clutter the face of a rule and lead to error. While I do like to have a metric rule in the shop, I only get it out when I need it. I like a good, simple one with a marking every 1/16”.

Now that you’ve picked out your rule, how can you get the most out of it? Here’re a few tips:

Start with the “one”: I don’t always trust the first inch of my rule. I don’t know why, it may be because I used to use cheap ones which really shouldn’t have been trusted. But I’ve noticed that even the pros, with their fancy, expensive rules use this trick. When measuring the width or thickness of a work piece, start with the one. Any nick or wear of on the end of the rule will be canceled out. Just don’t forget to subtract an inch from your layout!

Use the edge: Sometimes the thickness of the rule can work against you. Your eyes can misjudge the position of your pencil when compensating for the distance from the markings on the face of the rule to the work piece beneath it, creating an offset. When I need very precise marks, I stand the rule on its edge so that the scale touches the work piece.

Find the width: One nice thing to have around the shop is a center finding rule. It has a zero in the center and the markings run out from there toward each end. But you can find the center of a work piece with a regular rule too. Simply place one end on the edge of the board, and angle the rule across its face until one of the marking with an even number touches the opposite edge. Divide by two and you have your center.

Divide evenly: You can use a similar technique to divide a work piece into equal parts. The zero end goes on one edge, and the rule is angled across the face until the number that corresponds to the amount of divisions you require meets the opposite edge. Mark each inch across the face and you’re done.

This is just a small sample of what a good rule can do. So use your measuring tape when you must, but don’t forget about the lowly rule. It may look like a simple tool, but it can be one of the most versatile in your shop. 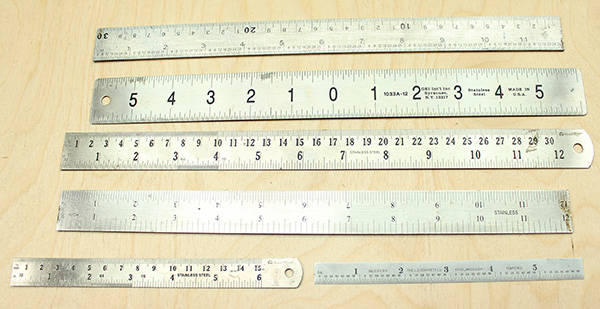 View all parts of Stumpy's Twigs of Knowledge »

All true and good info Stumpy. I rarely use a measuring tape in my shop. I just don’t trust them. I mainly use my steel rules. I actually do all the things you suggest, but I had to first take a masters degree in measuring mistakes. That education took me a lot longer than 4 years, and I still get it wrong more often than want to say! Now about that jig saw/saber saw controversy…………………..

isn’t it interesting how we take things for granted — often focusing on those big power tools when the basic, taken-for-granted tools are so vital to the craft!