Stumpy's Twigs of Knowledge #2: Which type of vise is best for an old-timey bench?

When you’re building a traditional piece of furniture, it makes sense to keep everything… well, traditional. You wouldn’t put a digital face on a Townsend clock. But a workbench is different. We built our bench in the Roubo style for its features more than the old-timey tradition. (Watch our 2X6 Roubo woodworking bench videos here) So equipping it with a modern vise isn’t sacrilege, it’s a no brainer. The only question is, what kind of vise is right for your bench. There are primarily two kinds: face vises, and end vises.

READ THE REST OF THE ARTICLE BELOW- OR OVER AT STUMPYNUBS.COM WHERE THERE ARE ADDED PICTURES AND STUFF… YOUR CHOICE… 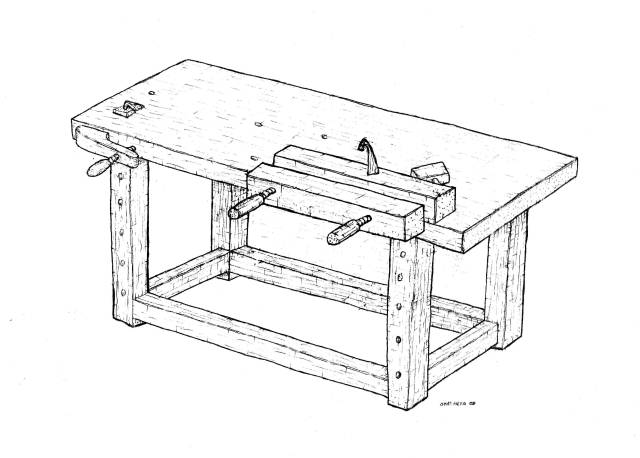 Interesting fact: the face vise is often the first thing your face will hit if you trip over your wood scraps and fall near the bench. It’s also possible that it got its name from the place it mounts- on the bench face. A face vise is used to secure work pieces large and small, and is typically positioned near the left leg (for the right handed woodworker). This enables it to secure the leading edge of a large panel while the rest is supported with a holdfast or bench dog, provided you can get ol’ Rufus to sit still. Face vises are also used to hold stock perpendicular to the bench top for dovetailing or other tasks. Just about any vise can be a face vise, but some are handier than others.

Cast Iron: These sturdy vises have been around for more than a century, and for good reason. They rarely lack for clamping power and are built to last a lifetime and beyond. The biggest complaint with this type of vise is that the jaws won’t stay parallel to each other while clamping a work piece off center, which can dramatically reduce the clamping pressure. Moving the work piece to the center of the jaws isn’t always an option because the screw and any guide bars tend to get in the way. The solution is to place a scrap of wood on the opposite end, keeping the jaws parallel to the bench face. Modern vises can be purchased with a double screw, which eliminates this problem. However some people say that the double screw makes it more difficult to dovetail on the end of a long panel. I suppose you can’t have everything. Perhaps the best feature of many cast iron vises is the quick release option. Typically a lever is found near the main screw which disengages a split nut, allowing the jaw to be fully opened or closed without turning the handle. The convenience of this feature alone has made the cast iron vise a mainstay in many of today’s shops.

Shoulder Vise: Some say screw it altogether to the cast iron vise and opt for the European shoulder vise, which is integrated into the bench top itself. Where the shoulder vise really excels is dovetailing because there’s no hardware in the way if you want to let a long work piece extend toward the floor. Hungarian master Frank Klausz once said “why you want any other kind of vise”. And it’s hard to disagree, mostly because he’s such an adorable grandfatherly looking fellow. But the shoulder vise is a tough build and requires a fifth leg to support it. And, depending on how it’s designed, you have to remember that there are certain parts of the bench around the vise that aren’t as solid as the rest of the top, so beware where you pound.

Leg Vise: One of the oldest of old-timey face vise styles is the leg vise. As their name implies, they attach to your bench leg. Don’t be fooled by their simple design. Whoever invented the leg vise was a genius on the scale of Leonardo (Divinci and Dicaprio). A single screw passes through the large outer jaw and the leg of your bench, where it mates with a corresponding nut. When you adjust a leg vise, you not only turn the screw, you also place a pin into one of a series of holes at the base, creating a pivot point. So, when you tighten the screw you are levering the top of the jaw into the bench face, exerting a tremendous amount of clamping pressure. But therein lies the problem. You have to bend over to use a leg vise. Sometimes I’ll go for weeks without changing my socks just to avoid bending over. And I’m not the only one, which may be why the leg vise is hard to find in the modern workshop. That said, it is making a bit of a comeback.

As you would expect, the end vise is found on the end of the workbench. While it can be used for clamping stock perpendicular to the bench top, it really excels when used in combination with bench dogs for clamping stock flat. The end vise is actually used more often than the face vise in many shops. For some, it’s the only vise they have. If I was going to have just one vise on my bench, it would be an end vise.

Cast Iron: Just as the heavy duty iron vise dominates many bench faces, it also holds its own in the end vise position. There is very little difference between the two, and most models can be used interchangeably. Some woodworkers prefer a wider jaw on the end of their bench, but any cast iron vise will serve the purpose. The same drawbacks apply wherever you mount these heavy duty beauties on your bench.

Wagon Vise: This nifty little doodad consists of a screw that passes through a frame buried within the bench top, creating a moving dog hole. I actually really like this style, but it does have its drawbacks. For one thing, you have to design it into your bench from day one. You can’t add one of these after the top is built. And second, it’s only good for securing wood flat on the bench top. So if you do want to clamp work pieces perpendicular to the bench, you’d better have a separate face vise.

Tail Vise: (Now, this can be confusing, because some people call all end vises “tail vises”, and that’s not incorrect. Both terms are used interchangeably in old woodworking books. But for the sake of our discussion, which is convoluted enough, when I say “tail vise”, I’m referring to this style alone. And when I say end vise, I’m referring to the whole category of vises that go on the end of your bench, including the traditional tail vise.) This type of vise is what happens when a wagon vise meets a nice shoulder vise, buys it a few drinks and nature takes its course. It looks really cool. But looks can be deceiving. I used one of these for quite a while on my old bench. It’s a big “L” shaped block that nests into the front of your bench top, with a wooden chop that extends across the end of the bench. The biggest problem is that it creates a giant no pound zone on the front of your bench, which is just the spot you typically want to pound. And even if you don’t beat on it, they tend to sag over time. Don’t get me wrong, some people still use and enjoy them. But it’s perhaps the least common form of vise today.

So, now that you know all about the different types of vises available to you, which will you choose for your new Roubo workbench? I decided to go with a pair of high quality cast iron vises. Besides the fact that they should last forever, and they give me a lot of clamping capacity, their greatest selling point was the unique quick release feature that engages (or disengages) automatically with a quarter turn of the handle. I mounted this one to the face of my bench, and this one in the end vise position. Whatever you do, choose wisely. Picking a vise based on how it looks or how cool it seems is a bad idea. This is the heart and soul of your bench, you will be using it a lot! The wrong vise will give you headaches for a lifetime, but the right one can be your best friend.

Thanks for reading, and check out more woodworking goodness over at Stumpynubs.com!

View all parts of Stumpy's Twigs of Knowledge »

Sorry Stumpy, you asked a question which I didn’t answer. I think the type of vise would be determined by the type of work being done. For example the Moxon type vice is great for holding stuff like chair bottoms and such while a leg vice might be better for long panels or boards. I guess a leg vice or a hook like in your picture above with a portable Moxon would probably the most flexible combination.

I guess I’m too practical Stumpy. I can well appreciate the desire of some wanting to keep a traditional bench design true to it’s origins, but I am just too practical to care much about making a fashion statement in my shop. I have Record style quick release face and tail vises on my bench and I can’t imagine a better and more convenient vice arrangement. 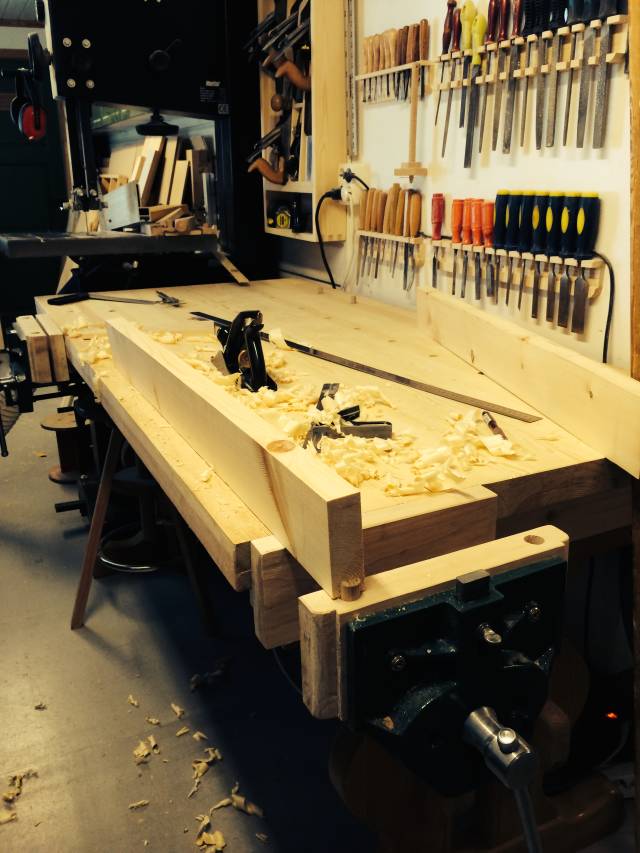 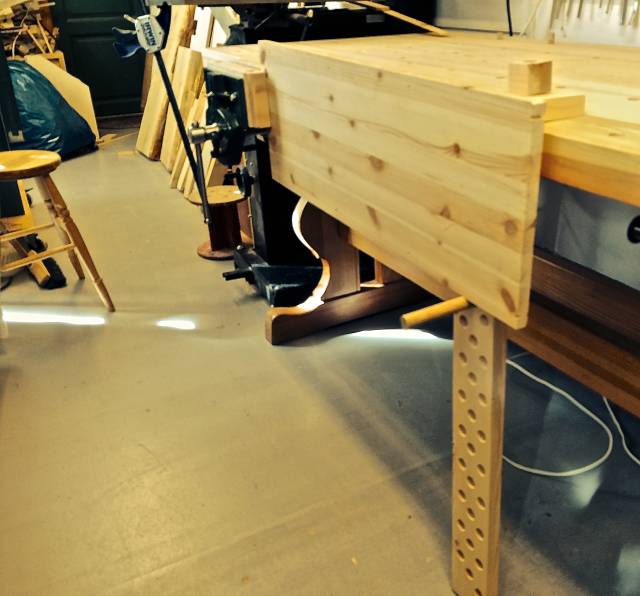