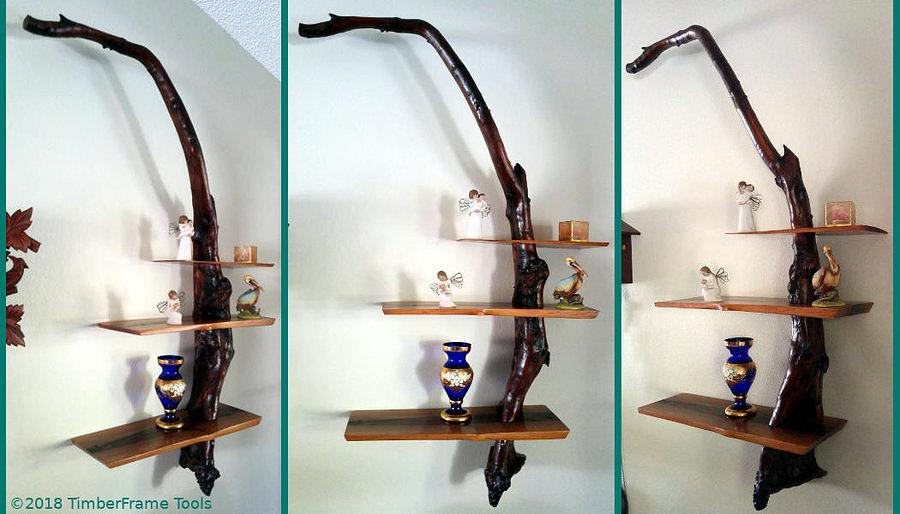 We found this large section of root mostly buried by sand on a beach on the gulf coast of Florida. It seems similar in style to roots I have seen exposed near the water’s edge on Slash Pine. Though I was surprised by how dense and heavy the root is. The shelves were initially cut during my experience of trying out/developing my gang saw. The section of wood used for the shelves came down during Hurricane Irma. I picked it up from the side of the road in my neighborhood. I initially thought it was oak, but it turned out to be some mystery wood that is much harder, much more dense and has a maroon heartwood. Beautiful wood… I only wish I had more and wish I knew what it was.

The shelves are attached to the root with dado/half-lap joints. I tapered the shelves because I liked the look. Each shelf is also thinner than the next. I liked the challenge of making a three shelf system that requires that all three shelves are parallel to each other, and orthogonal to the wall yet have no standard face or line to reference.

The finish on the root and the shelves is several coats of Hope’s 100% pure Tung Oil. No stain, dye or other colorants were used. The root slides onto two angled lag screws that have had their heads cut off.