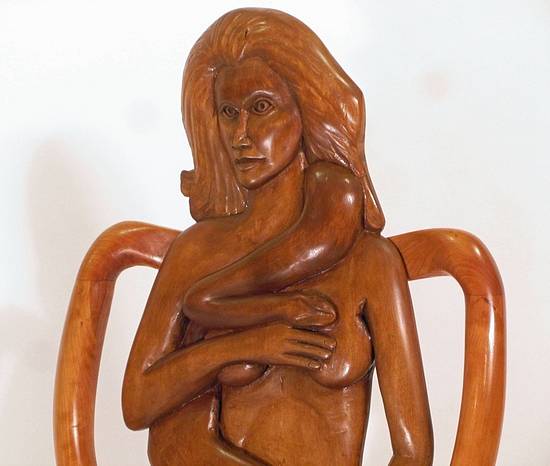 The Temptation of Eve is the second of my Snaker Style chairs. This chair was an opportunity to attempt a more difficult figurative carving. Something that I had never done.

I’ve had the idea to build an Eve themed chair for a number of years. I searched the internet for various photos or paintings of Eve with a snake and came upon a picture of the actress Rachel Weisz with a boa wrapped around her body. I decide some time ago to use that photo as the back of this snake themed chair project.

I made a tracing of the photo then scaled it up to the size needed for the back of the chair. The high relief carving is about 15 inches wide by 40 inches tall. Since this is the most difficult carving I have attempted to date, I wanted to give myself a fighting chance and used basswood. That decision would end up biting me. The blank was glued up from two 8” wide by 2 inch thick pieces of basswood.

I carved the piece over several months starting with the body. During this process, I needed to build up my confidence before starting the face and took a few more carving seminars. Although I was not able to get the face to look like Racheal Weisz it did turn out okay for a first attempt. Truthfully, I didn’t quite get the centreline of the face correct to capture this slight tilt of the head from the original picture.

Although I had the back of the chair decided on for some time, I still had not resolved what the body of the chair would look like. One of my other planned projects for 2013 was to build the Philadelphia side chair that appeared in the September/October edition of FWW magazine. I did not have the time to get that chair completed. So, I decided to use the Philadelphia side chair as the body for my Temptation of Eve chair. It was simple enough to replace the traditional carved back splat with the carved image of Eve and the Snake. The chair is made from Cherry.

I also wanted to incorporate an apple somewhere into the chair. So instead of carving the traditional ball and claw foot I decided to go with snake and apple foot.

Before carving the foot on the actual legs I carved a practice snake and apple foot out of basswood to make it easier for myself; to have a model to go by when doing the final carving; and to build my confidence carving this type of foot. On the final version I was able to correct for the mistakes I made when carving the basswood mock-up. One of the two apples has a bit in it.

One of my biggest woodworking challenges is finishing. I’ve had a number of bad experiences. For this chair, I started with a few coats of cherry tinted Danish oil. The basswood carving was dyed with an antique cherry dye. In spite of doing a test piece which looked okay, I really messed it up. The carving came out way to dark and blotchy. Fortunately I was able to bleach the dye out. For the second attempt I started with a spit coat of shellac (as per the Furniture Guys) and then coloured the carving with a cherry gel stain. It is still blotchy in spots, but at this point I was looking for a quick way to complete this chair and finished the rest with shellac, rubbed it out a bit and then applied some wax.

The seat is upholstered in a traditional way (FWW Nov/Dec 2010) with webbing, rubberized horsehair, cotton batting and cotton muslin and black cambric. It is covered with dark brown leather.

At some point in time I may decided to remake this chair to see if I can improve the carving. However, I’ve got some other ideas for Snaker style chairs, which include transforming the back of the Charles Rohlfs Tall Back into a series of carved interwoven snakes, another based on Giovanni Pedrini’s Death of Cleopatra painting and a Medusa themed chair. I still need to work on these concepts a bit more. If you have any other ideas for snake themed chairs let me know.

Very unique! Who gets to sit in the chair at family dinners?

I can’t understand it ……People are very reluctant to sit in a snake chair! We are having a family get together this weekend, all aunts and uncles, etc. will be coming over. I think I’ll put the chair out and see who is willing to sit in it.

lol, you should have a secret prize for whomever sits in the chair!

Beautiful chair, it’s a heirloom that you should be very proud of. Well done

A true one of a kind. 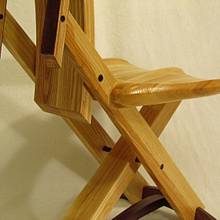 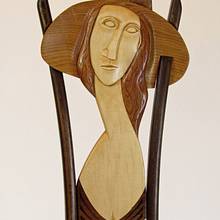 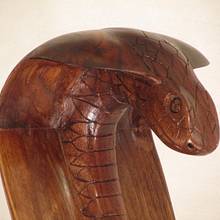 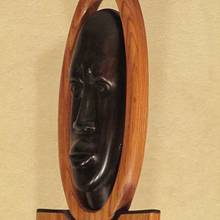