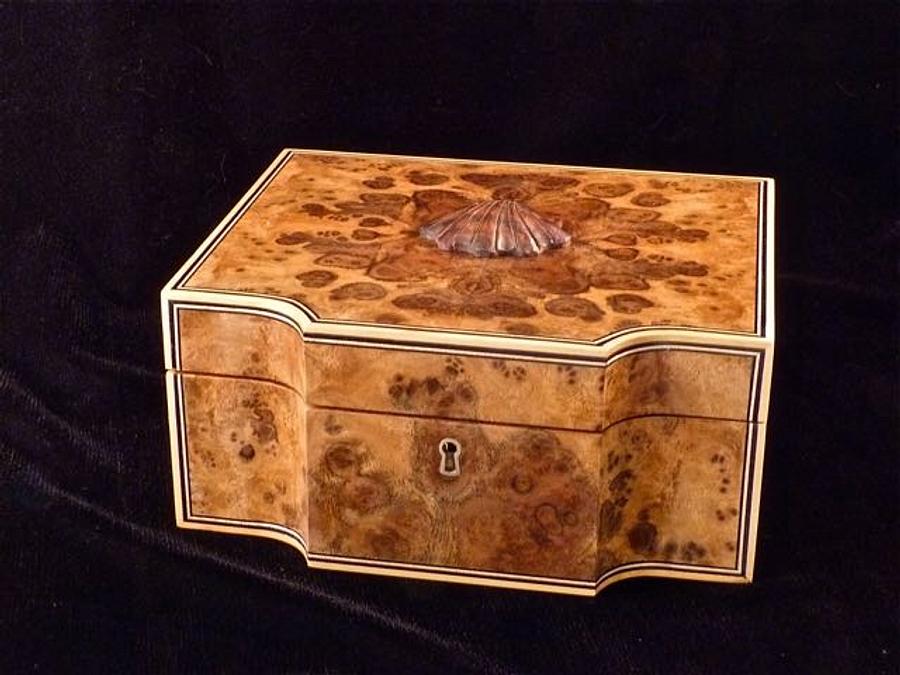 This is another box from a while back. It was made for a friend in London who has been gracious in hosting my wife and I, so I decided to make him a box. The idea is to make a box for a man, instead of a jewelry box for a woman. The compartments are sized more for a man. While not a period piece per se, it is intended to speak to work of the various Federal Period furniture makers. It is 7 1/2” x 9” x 4” high.

The design (shape) is influenced by the colonial knife boxes of the 18th century. These had lovely curvaceous fronts that I’ve admired for a long time. But, I’ve not seen it elsewhere. So the intent was to do something similar in a regular box?

The substrate is Baltic birch ply. The front is shaped from MDF and veneered in walnut burl. The lid is a four-way book match. The sides are cut from four sequential sheets, to be nearly identical. The edging is boxwood. I wanted to try an applied carving on a box. This one is a carved (chisel) scallop shell in figured claro walnut; a cutoff from a very nice gun stock blank.

The cocobolo trays have larger divisions sized for things men typically keep. They get progressively larger as one proceeds downward.

The interior is lined with a dark green pig suede leather. Some of the old English boxes of the 18th and 19th centuries included a “document compartment” in the lid. I included one in this box. The embroidered monogram identifies it as a personal box. As I probably mentioned in earlier posts, I like the interior to be at least as important as the outside of a box. To open a box and find… nothing… is disappointing. So, I try to surprise, not disappoint.

The hinges are the gold plated machined brass units from BCSpecialities.com. The full-mortise lock and brass escutcheon are from WhiteChapel.com.

The finish is French polish. It takes a couple weeks to complete properly, but it’s worth the effort to get the perfectly clear, glass smooth finish. The color is natural.

I make a few solid wood boxes, but it’s the veneered boxes that really interest me. The combinations, the matching, the decoration, all provide limitless possibilities and challenges. On this box, fitting the face lines and edges to the tight curves were the most difficult, and it took a while to figure out the document compartment. I was curious how many separate “parts” were in this box. I counted to 196, but probably missed a few.

Nice box Roger. I love the walnut. The detail in your boxes is always a joy to examine. You have such a good sense of when enough is enough. I have to try a veneer box- all mine are solid.

I would never have guessed you would have so many part’s in it.

Wow, what a gorgeous box!

Roger, a very nice box. This speaks volumes of your craftsmanship and patience. As mike1950 stated, I love the attention to details which you display in every box. Another exceptional build, Roger.

Another exquisite and amazing box Roger, It’s a joy to see all of your wonderful creations.