My saw has been a little out of whack for a few months. A few issues. First the fence was not plumb. I thought one of the glide pads was worn down but it turned out to be a warped table causing it. Not the table actually, but the fence rails. I have a 50" Biesemeyer that has a 7’ rail front and back. I’ve been messing with the height of the table recently and one of the extension legs was too low, causing the table to warp. Bringing that back into level all around fixed the fence plumbness issue.

Then I set my sights on the fence rule. It’s been a little off for a while. It hasn’t really bothered me since I haven’t been doing much lately that requires absolute precision measuring. So I bought a digital caliper for this job. I took a piece of the teak we’ve been using at work and cut it to one inch thickness. Then I measured and it was almost 1/32 off. I nudged the fence and kept cutting it until I got it down to precisely one inch. Shaving off the edge proceed to be a difficult task. The teak is so hard that if I pushed it quickly it would just push the blade out to the left. After I figured that out, I pushed it through slowly. That worked and I ended up with a piece exactly an inch wide. Then after all that, with the fence still locked at the position that have me a precise one inch cut, I adjusted the rule marker on the fence to one inch. I’d like to say it’s exact, but really it’s as close as my old eyes with both reading glasses and magnifying glass could make it.

A nice byproduct of this exercise is that I now have a durable and precise reference block for crosscutting. I’ll clamp it to the fence and add an inch to my cut dimension so I can make the cut off the fence. I should have bought one of these calipers before.

This is the fence at actual 1" before adjusting the rule marker: 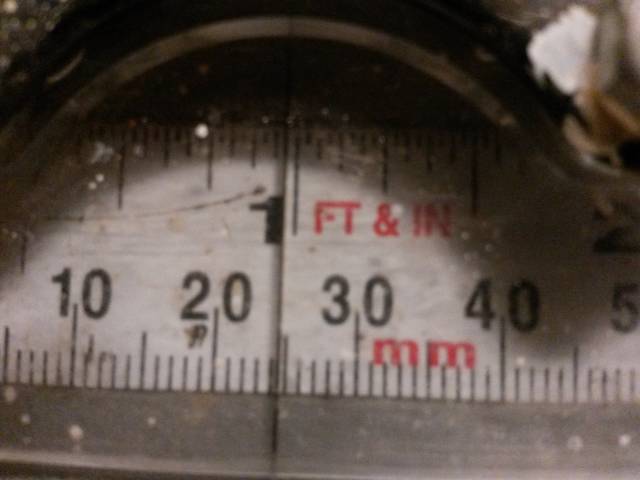 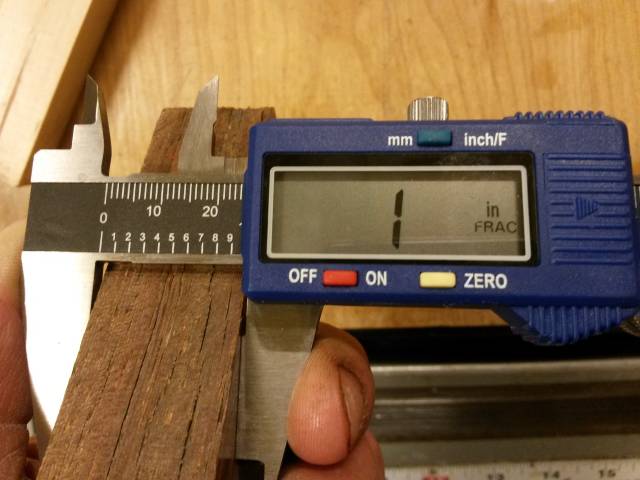 Next job is to lube the trunnion with some paste wax. I’m tired of the squealing.

I have my saw set to cut a 1/32" over the reading.So I can then joint or plane to the desired size.

Could you elaborate on that a little? I don’t understand.

By the way, I ruined my precise stock. I wanted to see what it looked like finished so I sanded it a little and applied some linseed oil. Then I measured again and it was 1/128th narrower. LOL it’s beautiful stuff, though. 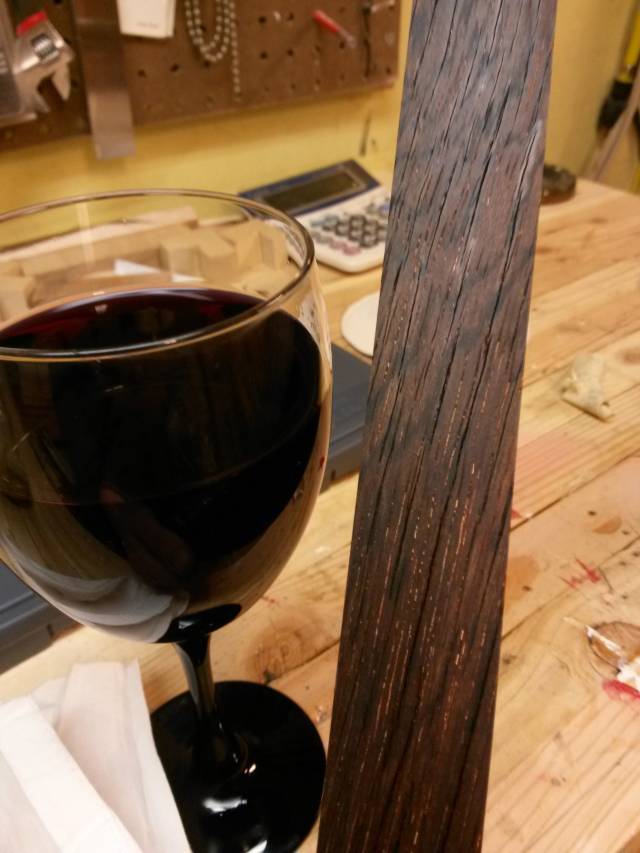 The wine is a ahem… color reference. :-)

Just a question. Did you recently change to a thin kerf blade?
The fact that the thin shaving cut pushed the blade away and the slight discrepancy in the rule have me wondering. It could explain both.

That’s a good observation, but, no. Same blade and it is thin kerf. I think I knocked the rule marker when I removed the fence for something. I’ll try to be more careful with that in the future. Sometimes I take the fence off the table to assemble things or paint, etc.

Pushing my measuring piece through very slowly solved the shaving/blade warp issue. That was a weird thing to find out. I kept moving the fence in very tiny increments and the measurements continued to be the same. LOL I knew I wasn’t crazy. I kept remeasuring to make sure I wasn’t just holding the caliper wrong. Haha. And now after sanding it’s 1/128th off again. I guess it will still be useful for a false crosscut fence. I think I can live with 1/128th out for 99.99% of my crosscuts. :-)

Sure Brian…I found it easier to cut everything oversized for the next operation.If I set my saw to 5" on the fence then it will cut 5 1/32".Then I run it through the molder for its finished dimension of 5".Doesn’t sound like much, but if your cutting 1000 different parts quickly, you don’t have to add for anything.Same goes for a lot of other machines I use.