I made a box to hold my cigarettes that I buy loose at the local reservation. It’s been almost 2 years that I’ve carried that box with me everywhere I go: work, fishing, rain, shine, snow and sleet. It’s taken a LOT of abuse and it shows. It’s broken into pieces several times and each time I’ve been able to repair it but it’s getting up the point where repair will not be possible any more. The main problem is not the mitred joints, but rather the fact that it’s made of 2 different woods and the glue joints have split due to movement more than stress. Basically, the only thing really holding it together now is an epoxy coating on the inside. Being a little flexible, it’s been working despite all the splits in the box. The lid has given me the most trouble lately.

Here is the box: https://woodworkingweb.com/creations/2664-cigarette-box

In anticipation of no longer being able to repair the original, I started making a new one using the lessons I learned.

First, I’m using solid panels. No edge glued joints to split. Second, the pieces are just slightly thicker, although after sanding they may become the same 1/8 thickness. Lastly, I keyed all of the mitres. I’m not sure how this will look when it’s done. I’m sure it won’t look bad but I don’t think it will be anywhere near as beautiful as the original. 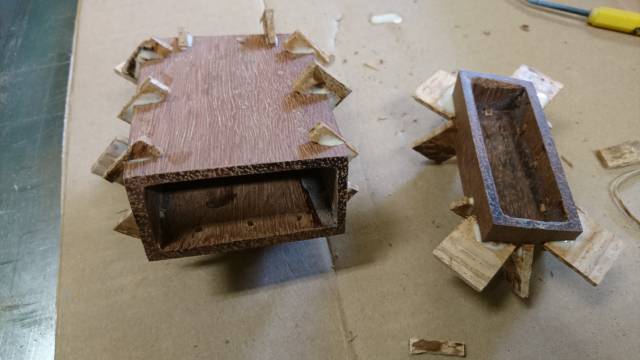 And here’s the condition of the original today. Notice the splits between species. 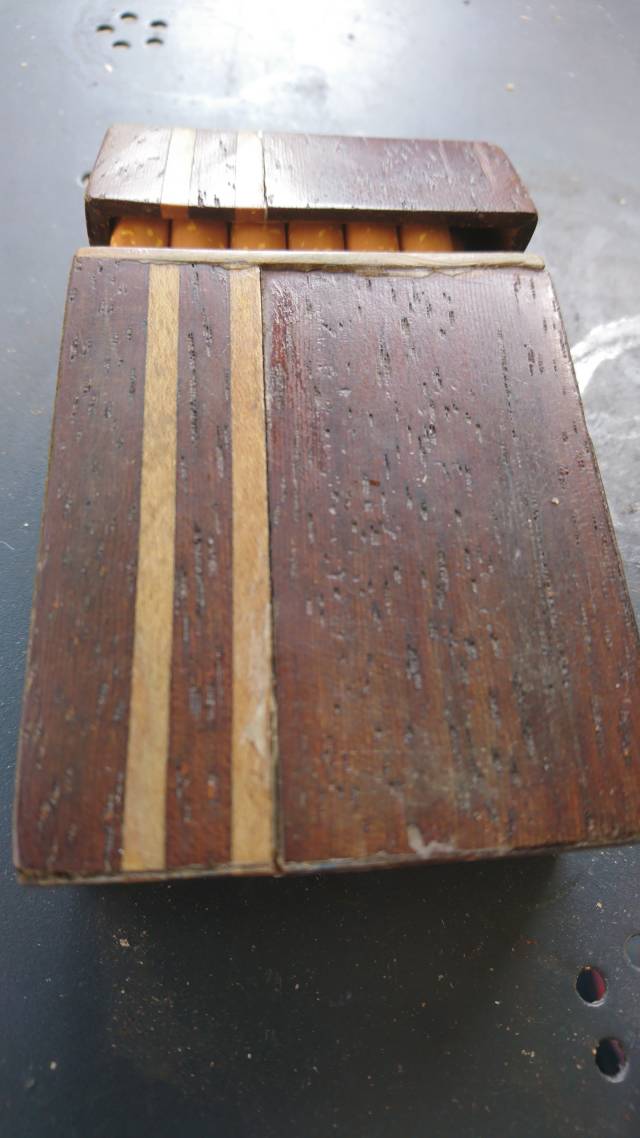 I would really like to make another one just like the original because the inlay really makes it shine. I have an idea for that. I need some kind of substrate to hold it all together and I decided to use HDPE, which I can get from milk jugs (I think I can get enough flat pieces from a few jugs). Basically, the plan is to rough cut the pieces of the blanks, then epoxy the HDPE to each piece, then finish cut them, then glue everything together with polyurethane glue.

I used gorilla glue on the original and it has so far worked out fantastic. The body mitres have not broken once. The lid has come apart and I’ve made repairs using epoxy, CA glue, blood, sweat, tears, etc.

Anyway, I’m hoping that the keying will make this new one last without needing repairs once a month.

Madts replied about 5 years ago

Use some 5mm. bamboo skewers as dowels as a stopgap measure.

I’m having trouble seeing that. Could you walk me through it?

Well, I discovered something useful today. I was dreading sanding down those little key splines that stick up a little after cutting the waste off. I got the idea of using a whole sheet of sandpaper on a piece of cardboard and it worked amazingly well. I could not have done it quicker it flatter with a ROS. It went FAST. I started with 120 grit sanding in a circular motion. After that I did a little sanding with the grain, then I laid some 220 over it and did more with the grain. Had the whole thing finished in less than 20 minutes. And the corners were super sharp because it’s very flat. I rounded them off with a sanding block because this little box is going to live in my pocket and I can’t have sharp edges tearing up my clothing. 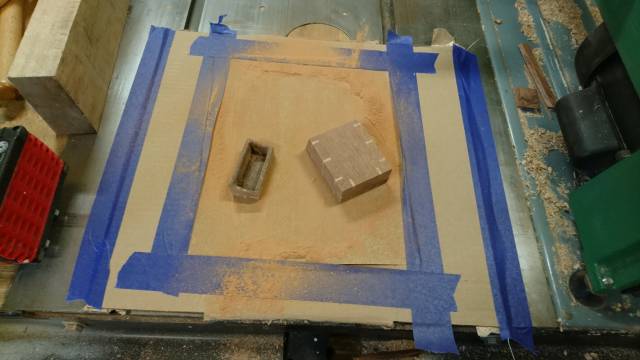 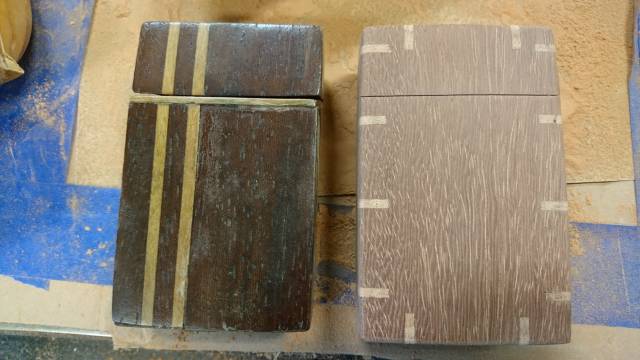 And now it’s done. I just put some Danish oil on it. Love that stuff. I think this one will last a few years at least. I hope so anyway.

This little sanding trick is going into the knowledge bank. I wonder how it could work with larger things like a table top. I’m going to try that somehow, like going a whole sheet to piece of plywood with handles or something along those lines. I really hate the ROS – it’s loud and I have a tendency to gouge with it. The whole-sheet method could prove to be quiet and super flat.

I just had an idea – I have a couple of marble cutoffs. I’ll make the block from that. Holystone sanding!

Madts replied about 5 years ago

Brian: My intent was to use bamboo skewers as dowels instead of splines as you did.

That’s a good idea for the inlay. It would have to be literally paper thin but it sounds doable. Maybe fill the inlay “tracks” with sawdust and glue. It would be easy to smooth with a scraper, like you said, on a large blank before slicing it up to make the pieces.

I used Danish oil to finish it. Polyurethane would never stand up to the kind of abuse this box takes. Even if I could somehow keep it from peeling off, it would be scratched up very badly. Anyway, there’s so much resin in this wood that it is sort of naturally sealed. (It used to be pier decking.) The oil just keeps the outside from graying. I used teak oil on the first one and it held up nicely, even getting darker over time. Very chocolatey in color. I’m sure some of the dark came from jingling against my brass Zippo. I noticed smudging early on from oxidization against the brass. After a while that went away. I think whatever chemical process between the two faded out over time.

I only smoke outside the house, so at home I leave it on a little table under an awning out back. It doesn’t get rained on unless it’s blowing hard, which happens a couple of times a month. But it sits out there overnight no matter the weather and often during the morning it takes the heat of the sun. Then, of course, it goes in my pocket whenever I leave the house and gets exposed to all the elements I do, including surf fishing, which is by far the most abusive, having been literally dunked a few times in salt water, but takes salt spray at least every other outing. I have to say, this polyurethane glue is pretty amazing stuff to hold up as well as it did against the elements. I have 2 pockets in my surf jacket and only one is waterproof so that one stores my fancy electronic car keys. Modern car keys are so bad. They should be 100% waterproof but they’re not. So old reliable Zippo and ekki box go into the flap pocket to take on the rain and salt spray while I’m standing on a rock waiting on that big girl to take my bait and praying I don’t get washed off into the current. Haha… This kind of fishing is not for the timid. I almost got washed off a couple of days ago while trying to bring in a fish. The fish got away and I ran away after that. LOL

Razor sharp, unfortunately, is not my strong suit. :-( But that’s why I do well with the cabinet scraper. :-)