Dust Collection - Not Just for the Shop (Yard Vaccum)

We have a few pine cones to deal with throughout the year. If I get to them right after they fall, the shop vac makes short work of them. However, if they sit, they start to open and clog the vac quickly.

Additional to the foregoing, there is the routine leaf clean up in the fall and spring. A shop vac doesn’t work and I suspect maw would be annoyed with me if I drove a riding lawn vac through her lilies and such.

It seemed like a no brainer to switch to a dust collector. Getting my four bag Jet to the yard just didn’t seem practical, however. My little one and a half horse Jet wouldn’t be bad to move, but it has a canister I’m not inclined to risk damaging it. These facts helped me convince maw to allow me to buy a third dust collector to dedicate to the task of “tending her yard”.

I found a Delta, which is a one horse, which is dedicated to collecting dust from the miter, when it’s not doing its [alleged] task of lawn keep.

Moving the collector about was a problem. Little wheels barely tolerate concrete, let alone gravel, grass and so on. Too, the unit tolerates pushing and pulling on a smooth floor, but, even with larger wheels, was not easily moved to and around the yard. For these reasons, I bought a couple larger wheels, then fabricated some wheel mounts-dolly handles from old 2×6’s I’d pulled off a remodel.

The built in dolly and larger wheels solve the problem of moving the unit about easily. Later, when I’m not feeling cheap, I might upgrade from the Harbor Freight seven inch wheels to, say, twelve inch wheels. We’ll see how frustrated I get moving it a few times.

The next problem I considered was common to every lawn vac system I looked at – everything was pulled through the impellers. For the same reason most of us don’t like this in our shops, I didn’t want it happening with my lawn vacuum. Since I had already put dolly handles on the Super Dust Deputy connected to my big collector, tying it into the system would be as simple as disconnecting it and rolling it into the yard.

My Dust Deputy is normally connected to a six inch hose. Since the lawn system would be four inch, I picked up a six inch to four inch reducer from Home Depot [or Lowes].

I modified the reducer to make it easier to install and remove. This meant drilling rivets and enlarging or shrinking openings according to the need of the fit, then riveting them again.

I have a four inch diameter, twenty foot hose running from the Super Dust Deputy to a four inch vac wand. It works wonderfully, even off the under powered collector. At least until you get into damp leaves and cones, which slows things. One day, I might upgrade to a horse and a half system, which should make a big difference.

If a more powerful impeller was used, I could add a blast gate, on a Y, to reduce vacuum in delicate situations.

The cyclone can is a plastic thirty gallon drum. It has a view port, which allows me to monitor fill levels. It works well, but I should have ran it up another seven or so inches.

To ease emptying, plastic bags can be inserted into the drum. However, the bags need to be clear, or you lose the ability to monitor fill level. Even if you aren’t paying attention to fill level, if you get any leaves into the collector bag, you know you have either a bad seal on the cyclone, or its full.

Because it’s a component system with dollies built in, it’s easy to get to the job site and to operate.

This thing cleaned maw’s flower beds of leaves well, and swallowed pine cones like a pro. This would work great for cleaning up paint chips from scraping a building for painting. Using it, I cleaned up a bunch of chainsaw chips from in front of the shop with ease. The uses are endless.

The next time I take it out, I’ll post photos of the beast running. It’s likely I’ll be taking it up to a local store to test it for picking up paint chips from a recent exterior paint, the scraping portion which left a significant amount of debris on the ground. 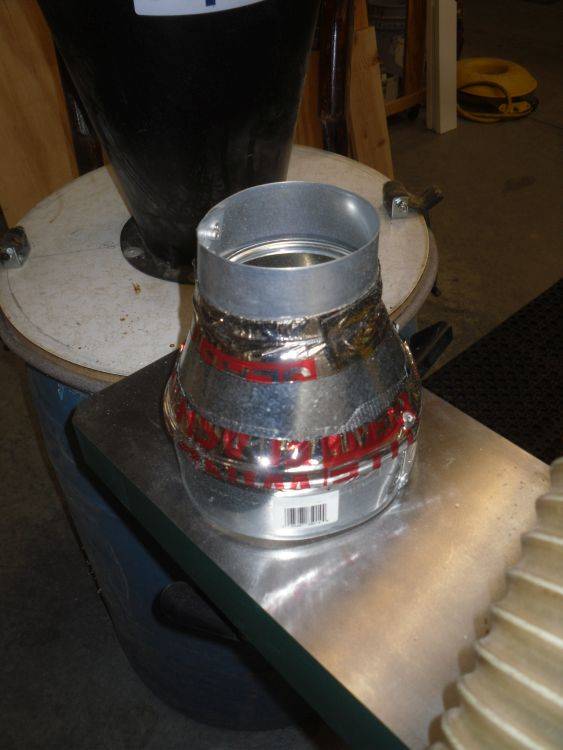 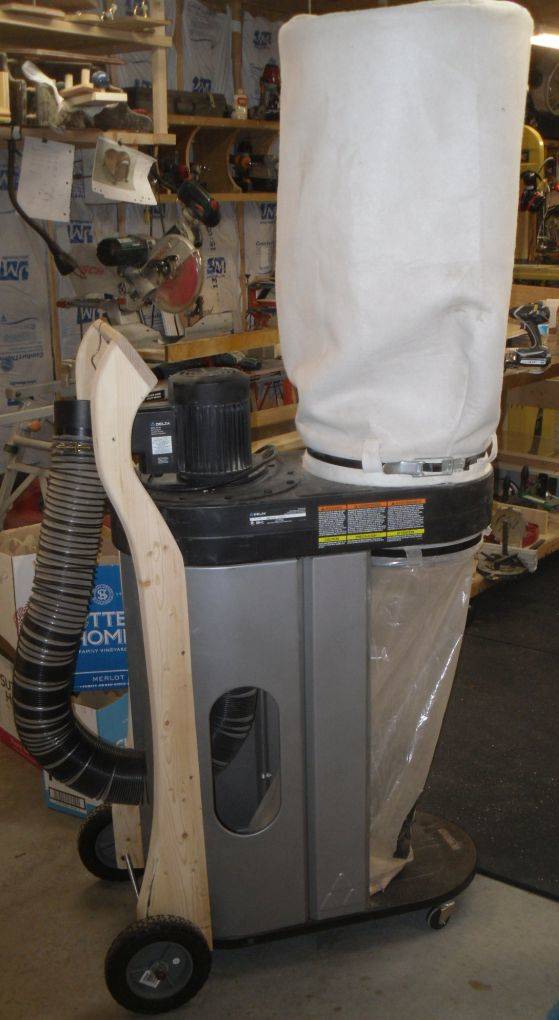 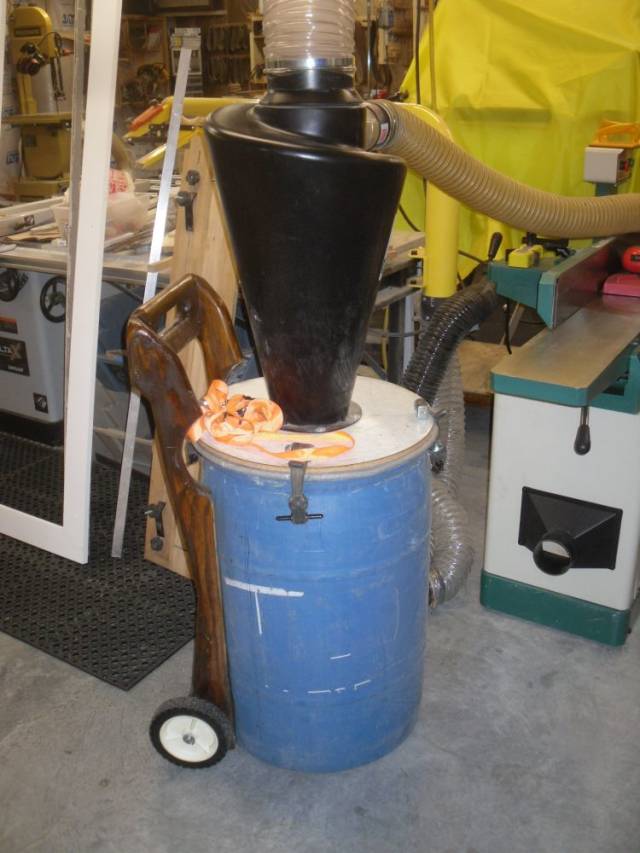 It doesn’t show, in the picture, but the other side of the blue barrel has a acrylic view port riveted and [silicone] sealed to allow monitoring of the fill level.