I made this project using the plans titled Curved Lid Treasure Box from Woodsmith Magazine (link below). Although I deviated some from the plans, I took advantage of their full size template for the lid as seen in the picture below. In the picture, the portion that I have in my hand was cut on the table saw removing most of the waste. The side opposite was shaped to match the curve of the template with a low angle block plane. I deviated from their version when I made the ends. I chose to use walnut for the ends. In the plans maple was used. I chose to use a dark walnut lacquer toner, carefully applying light coats until I got a rich dark brown color. I managed to get it dark enough but not too dark obscuring the grain. In the plans, they ebonized the maple with India ink. I changed the shape of the ends by using a large ½” roundover and a ¾” cove to create the profile. In the plans, they chamfered the top edge at the table saw and used a 1” cove to create the profile.

I deviated from their version in the maple finish. I chose to use Transtint Vintage Maple Dye. In the plans they used Transtint Orange and Reddish Brown. My goal was a light golden brown to contrast the dark brown ends, so I needed a relatively weak dye concentration. Mine a much weaker concentration of dye and distilled water than the cherry dye that was used in the plans.

The last deviation was the hinges. I chose to use Brusso Stop Hinges. In the plans, they used Precision Box Hinges from Horton Brasses. This is my first time using these Brusso’s, only because they are pricey. My experience from using them for the first time is a good one and will use them again in the future.

I applied several coats of gloss lacquer to the entire box. I rubbed it out starting with 600 grit wet/dry and working to 2000 grit wet/dry. I then used Maguire’s rubbing compound, followed by Maguire’s polishing compound to regain that high gloss.

This was a 2013 Christmas present for my mother to add to her collection of lacquered boxes.

That is one beautiful box.

Thanks for the compliments !

Nice polish. I really like the design. I checked out those hinges. Pricey but a great touch for a clean look.

-- Involve your kids and grandkids. They'll love you for it!

GaryL….Thanks for the compliment. I think the hinges cost more alone than everything else combined…

Thank you lanwater for the compliment !

Older project but I entered this into Curves -aliciousness contest. I didn’t see in the rules where I couldn’t. Hope my entry is fine with everyone

Beautiful box! Love the contrasting colors and the shapes. Way to go.

Thanks Shin for the compliment ! 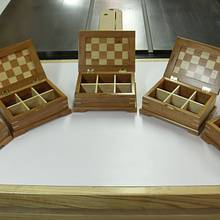 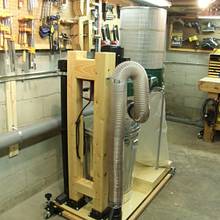 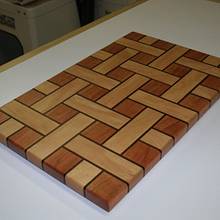 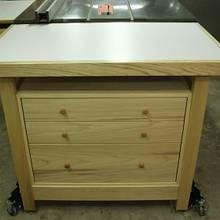