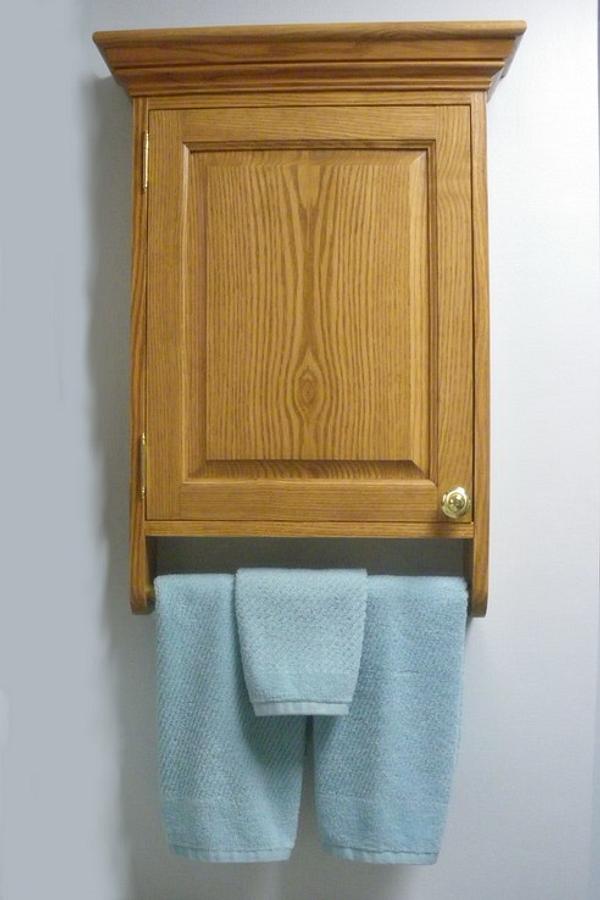 After completing our bathroom vanity earlier this year, I made a wall cabinet to match. I originally planned to have the mirror on the outside of the cabinet with the door hinged on the right so I could see into the mirror on the opposite wall for fixing the back of my hair. Thankfully, I have a very wise and helpful husband who suggested that I place the mirror inside so the door opening would make access to the inside easier. Dah! Why didn’t I think of that!

The mirror is held in place with little plastic mirror holders from which I cut the offset. I ended up having to pad it with felt so the mirror wouldn’t rattle. I had initially planned to cut a broken ¼” thick mirror but realized it would weigh too much for the tiny hinges with the added weight of the raised panel; hence, the mounting adjustments.

The horizontal parts hold the cabinet together with sliding dovetails.

The crown molding is made up of a leftover piece of molding I had made for picture frames and a bullnose piece added at a 22.5-degree angle. 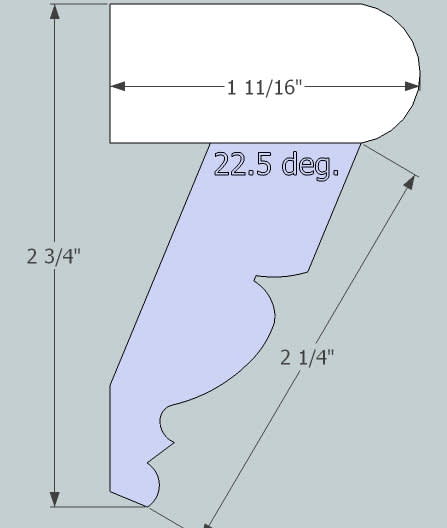 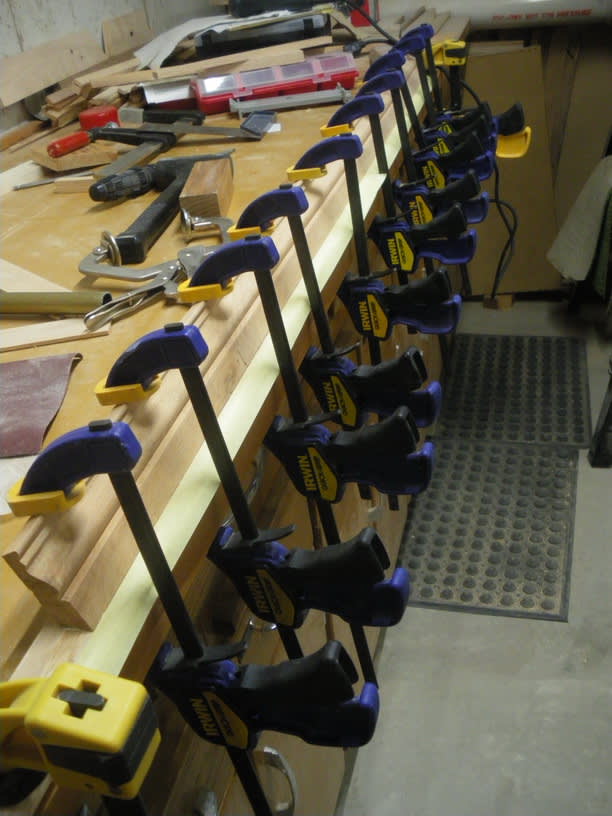 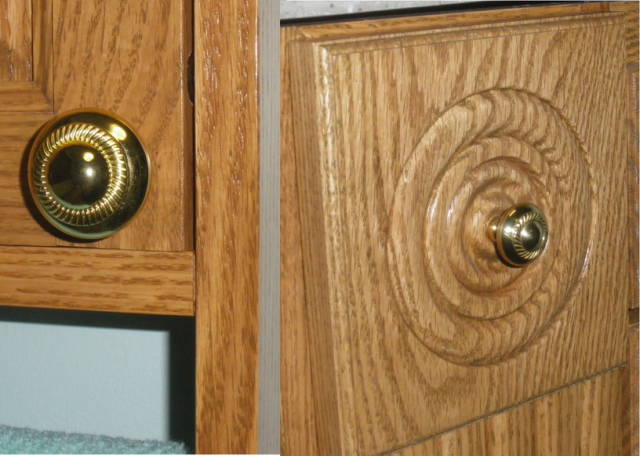 The towel bar is a vinyl-coated closet rod. [I won’t make the mistake again of using a wooden dowel to hold anything that gets wet!] 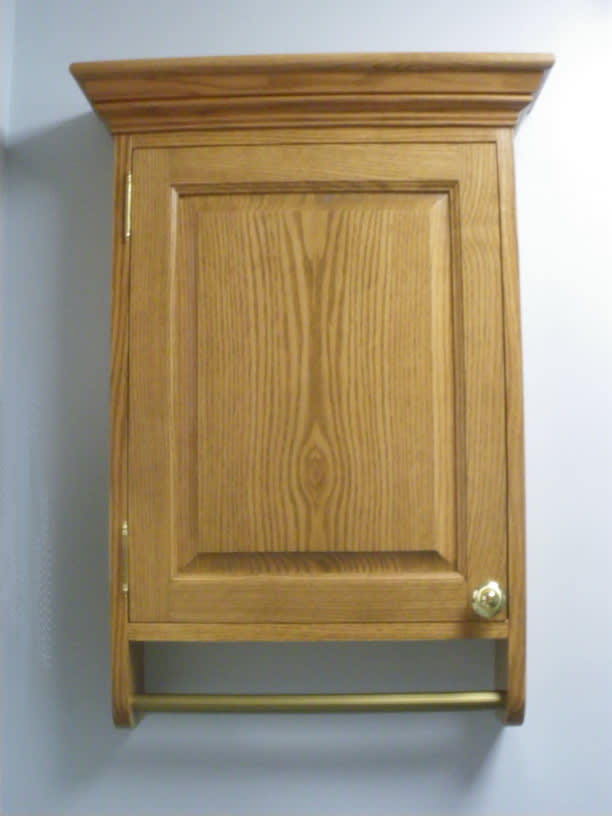 And here are a couple pictures of another wall cabinet that I made a few years ago as a 50th anniversary gift. 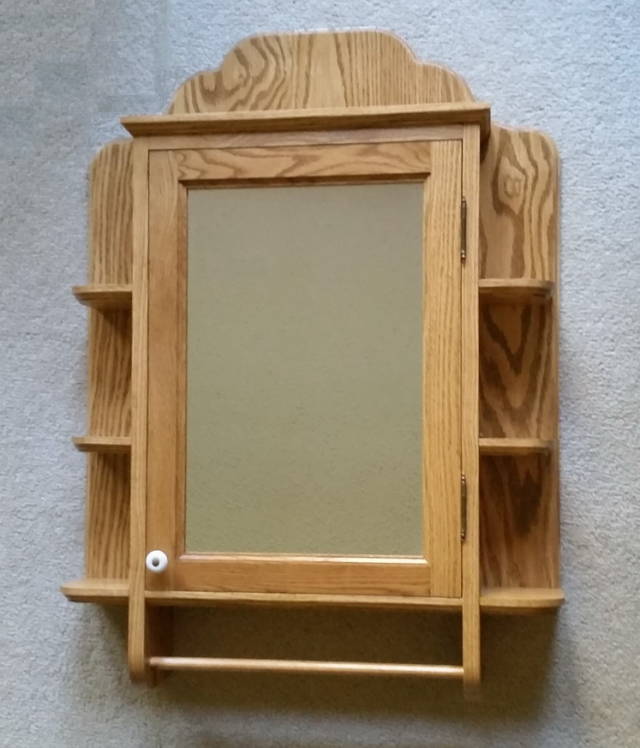 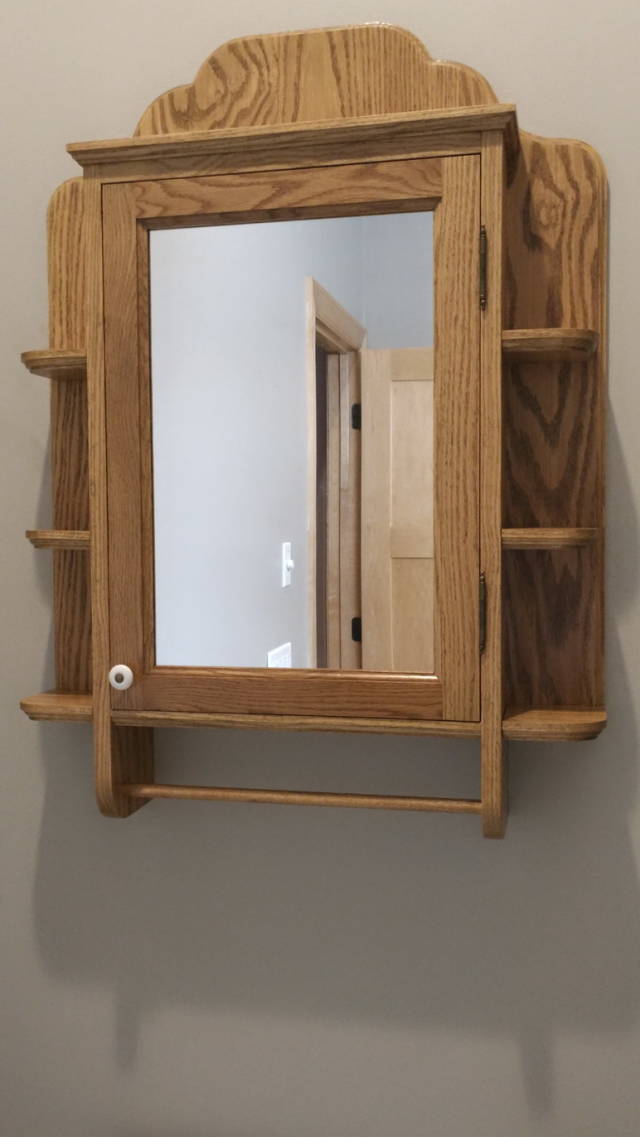 Comments and questions are always appreciated.

That is a very nice wall cabinet. I really like the book matched door panel.
Well done.

What a great job, true perfection.

Thanks, guys, for the encouraging comments.

That is really nice . I like the grain , is most of it oak? If I could afford it I would make every thing out of oak or catalpa .

Yes, it’s all oak. Our forest is dying of oak wilt so we have plenty to use. I would use other woods, too, but the only other one that we have sawn here is poplar. I’m too cheap to spend a lot of money on lumber!

Love your workwomanship! I hope to see more of your labors of love here. Thanks for sharing.

Thanks for the compliment! I’m “rebuilding” a 100+ -year-old Morris chair right now (which I thought would only be a reupholstery job). I don’t know if I’ll show it here or not. But I have a million projects on my to-do list so eventually I hope to put a few more on here.

Can’t be surprised that some reconstruction is necessary, considering its age. I’m sure it will turn out better than expected. If you don’t post the progress here, a finished pic would be nice. As for the rest…if only our long waiting lists of projects waiting to get into the shop reflected upon a star-like success. :)