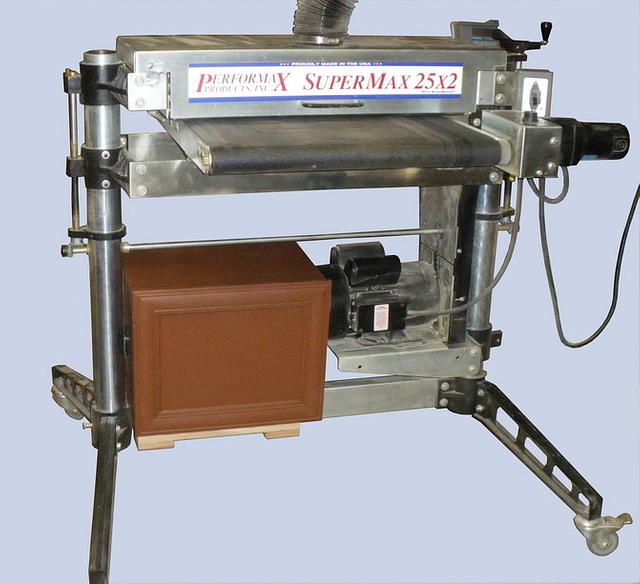 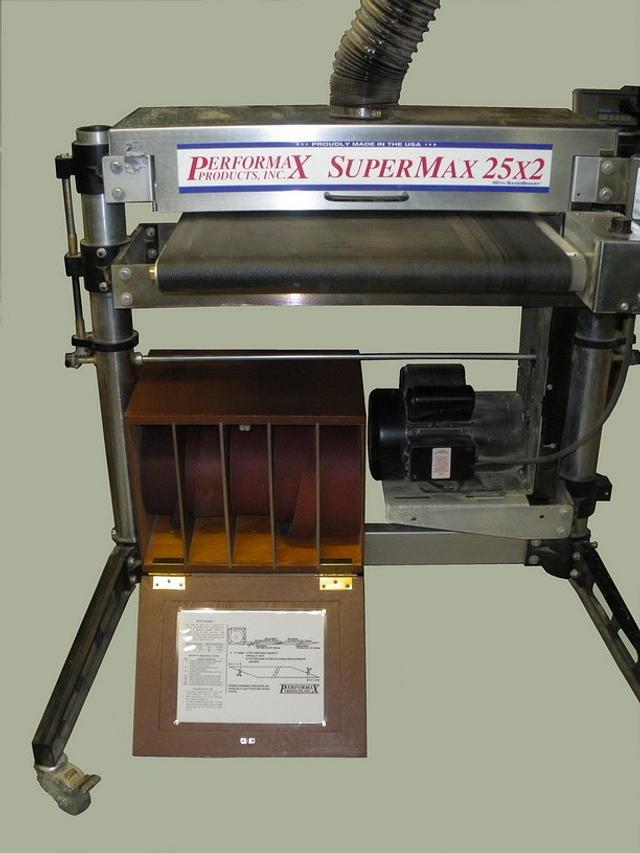 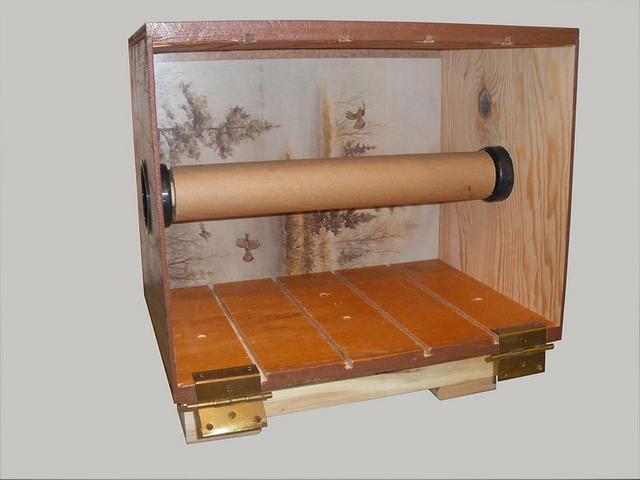 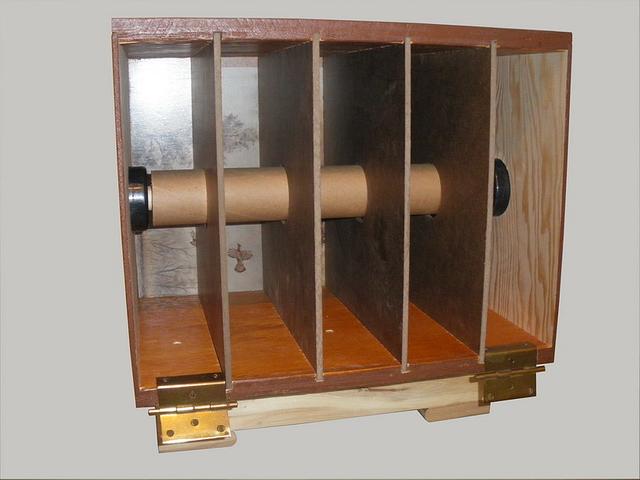 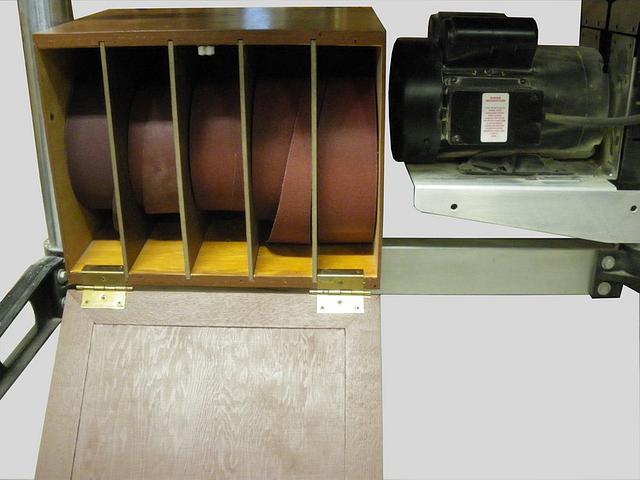 Since completing my shop storage cabinet, I’ve been on a shop re-organization binge – not that I’ve accomplished all that much, but at least I’m trying! 

For years I’ve thought about the possibility of storing the rolls of sandpaper (which have been sitting in a huge box at the top of the stairs) under the sander, but just never got around to making something that would work.

Then a couple of weeks ago, I disassembled a sewing hassock that I had made 40 years ago and decided now would be a good time to recycle the plywood into sandpaper storage. While this is another utilitarian piece and definitely not pretty, it is certainly a step up from the last use of the plywood. (In taking apart the nailed-together, butt-jointed hassock, I was able to see that I have progressed a little in the last 40 years!)

The storage box is made entirely from scrap and hardware that was sitting around the shop (that’s why the lovely background design [paneling] inside).

I made a SketchUp of the cabinet but it morphed from there! I realized that just placing dividers between the rolls was not enough and that the rolls needed something on which to rotate. I used a portion of an upholstery fabric tube and added wooden ends. 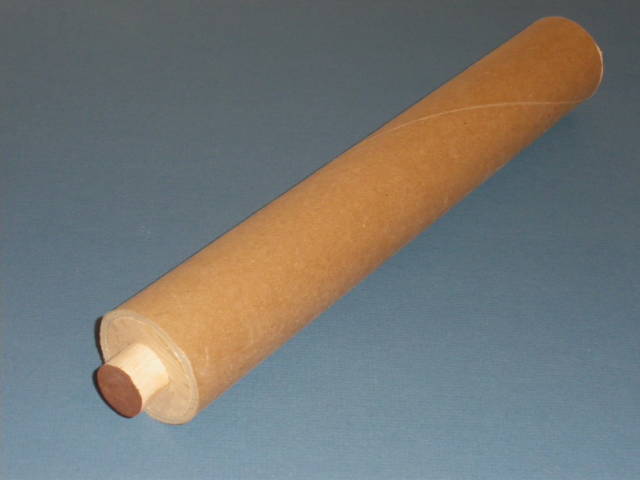 I fit the wooden ends into the thingamajigs that were in the boxes from the sandpaper company. 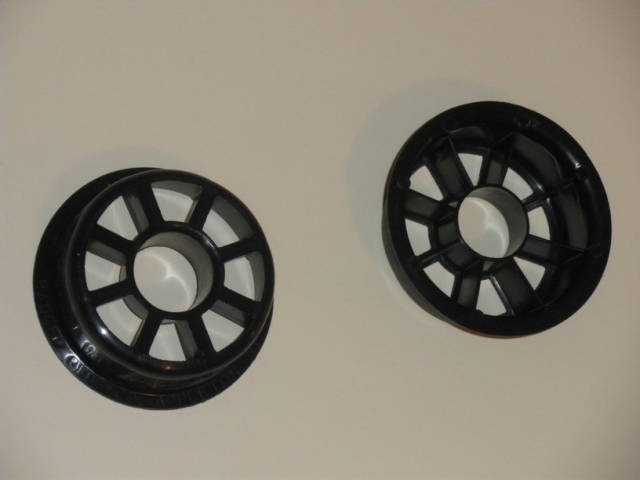 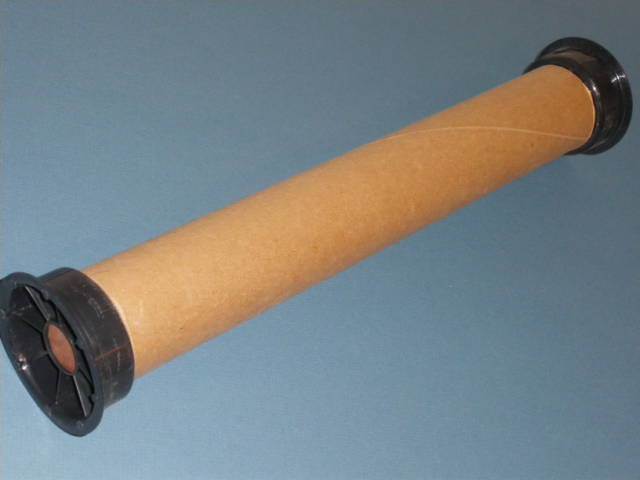 They fit into holes cut into the ends of the cabinet. 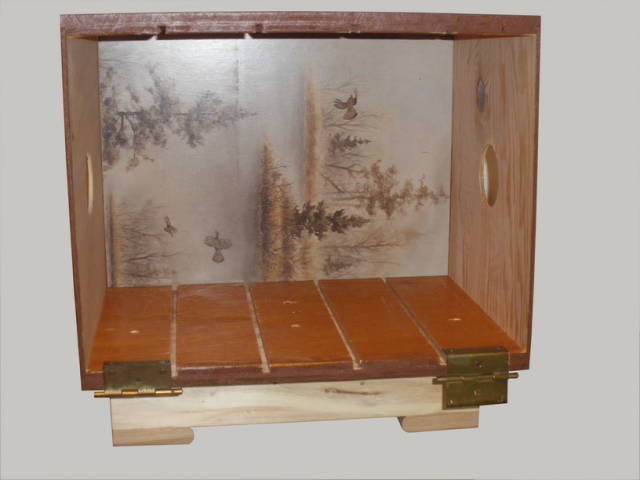 My original plan was to simply screw a piece of plywood to the front, leaving a gap at the bottom from which to pull the sandpaper. When I determined that I needed to cut the sides down to ¼ inch to allow room for air circulation, there was not enough room to screw on the plywood so I decided to hinge a door from the bottom, making it easier to see the sandpaper to unroll it. Instead of simply cutting a piece of plywood for the door, I used leftover molding I had made for a kitchen upgrade. Because the recycled plywood, paneling, and oak molding didn’t match, I decided to paint it was leftover brown paint.

The most difficult part of the project was installing it because the cabinet had to be filled prior to placing it under the sander and it was HEAVY for this wimp. (There was no room to the right or left of the cabinet to insert the tube and fill it.) I placed the cabinet on a short stool, filled it, and then slid it onto the sander framework. (Yes, my husband would have helped me but he was healing from leg pain and I didn’t want to set him back.)

I do have a question that maybe one who is more knowledgeable about motors might answer for me: Did I leave enough room for air circulation between the motor and cabinet? There is about an inch of space. I based it on the space between my table saw motor and cabinet which has even less space than that. They’re both 5HP.

Thanks for looking. I hope you can get inspired to do better than this!

Nice work and a great addition to your drum sander. I doubt that motor could ever generate near enough heat to ignite your little cabinet, but I’m sure you would feel better if an electrician told you this. The drum sander looks different, although very good quality. Is it an older model?

Thanks for your comments. The drum sander was made about 1997, so yes, I guess, it could be considered an older model (but when I compare to myself, I think it’s pretty new! LOL) It was about 10 years old when I bought it. It’s a dual drum, fixed end model . . . probably my favorite tool since I hate sanding so much. This really speeds the process. I think that SuperMax still makes one (in the U.S.) virtually identical to this one, (but the Performax name was purchased by a lesser quality company a number of years ago).

I didn’t even think about the possibility of burning the cabinet. I was thinking more about the lack of air flow shortening the life of the motor. I guess I should have thought about a combustible so close. OUCH!

That’s a great drum sander. The cabinet is a good addition. Now you have your sandpaper rolls where the action is.
Good call on the door, it’s easier to access the paper this way.

I am dying to have one sander like that. I have been checking craig’s list frequently but no dice.