A friend gave me a bag of billiard balls. I figured I’d make some coat racks out of them.

Holding them to drill holes to insert dowels can be a challenge. However, a piece of plywood I use under material I’m drilling was sitting on the drill press table and a hole about the right size to hold a ball. Another piece of ply was near it for the next drill job, if I needed a clean backer. Of course, the first piece, with a hole, held the ball, and the other allowed me to position my Jorgensen clamp to clamp the ball.

A quick twist or two and I was ready to ruin billiard balls, and gain a coat rack. 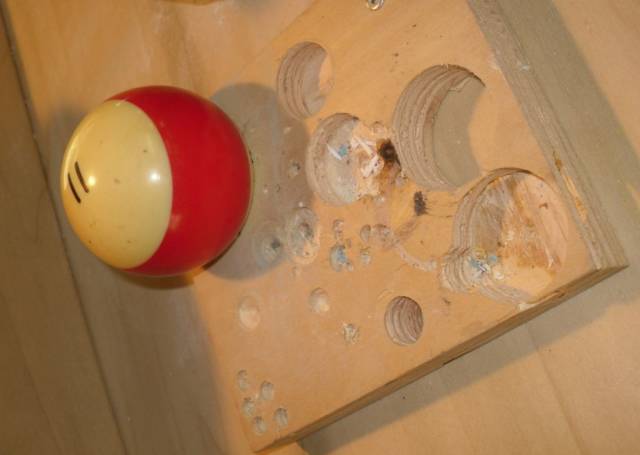 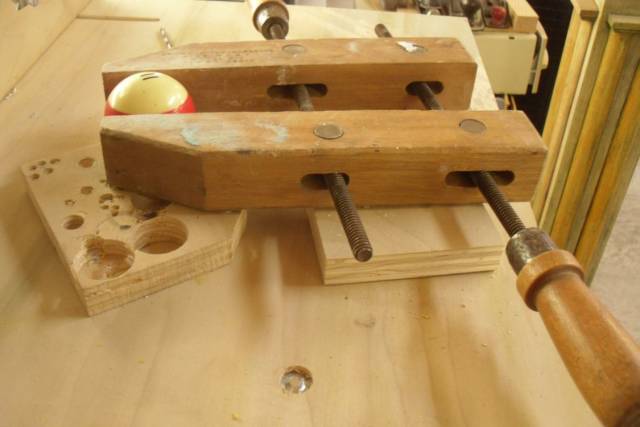 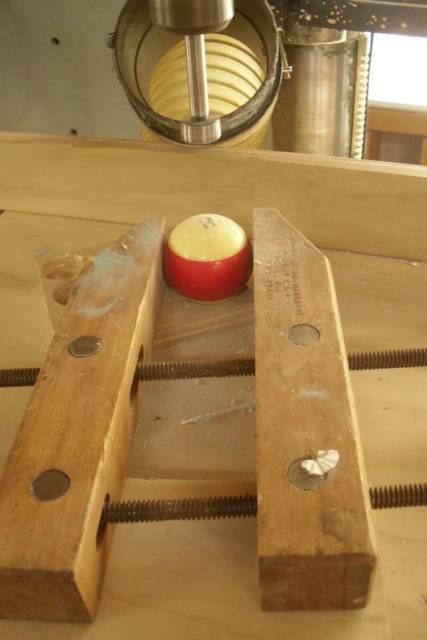 I’m really surprised that you haven’t gotten any comments. I’ve got an 8 ball that I want to drill for a shifter knob, for the ‘31 Model A pickup. Haven’t done it, as I haven’t come up with a good way. Found it with your post, though.

Great solution. Thanks for sharing this tip.

I’m anxious to see the finished coat rack. Be sure and post a picture. I am new to this site, but have already benefited from the many great suggestions like yours.

Created with Love by Tomas

Great idea. I have an old set I think maybe now I will do something with. Thank you.

If I needed to drill into a sphere I’d use the same sort of fixture. The only thing I’d do differently is I’d drill a pilot hole about 90% of finished depth first to encourage the larger bit to go where it’s supposed to.

Jeff, I used a Forstner or a spur bit, so the pilot was not needed anymore than if you were drilling in a wood project. In fact, too big a pilot could throw you off, when you switched to the Forstner/spur.

If I were using regular metal working bits, such as drilling for a shifter knob, the pilot would be, as you pointed out, a must. However, I’d still, likely, use a spur or Forstner because they cut nice.

As you can see in the attached photo, it went fine. In fact, the Forster would be better than a metal bit, because the dowel would have to have the same [large] hole in both the pool ball and the wood or plywood.