What a nice couple days. Though I live in the toolies and, generally, find any good craigslist deals far distant, I looked at the list the other day and saw a Rockwell Delta 46-450 wood lathe for one hundred bucks and only a couple miles away.

Though I haven’t found a listing of how much yet, the beast weighs a lot. I’m guessing around four hundred pounds, with the base. As such, general turning operations using out of round wood, at low speeds, shouldn’t produce much vibration. Certainly not as much as my little Jet produces for things relative to its size.

I’d just touched a lathe for the first time a couple months ago, when I bought a little Jet off craigslist [in town about an hour from me]. Now that all my files have nice handles [as well as those of some friends and a neighbor], it’s safe to say the turning bug is alive and well in me. As such, when I saw the heavy iron beast, I had to look at it.

I didn’t attempt a negotiation on the price. The parts were worth far more than that. Especially since it’s the “new version” and the [120/240 VAC] motor ran and everything was there.

I broke the thing down to its stand, bed and head stock, and base so I was able to load and offload the thing myself (it steered at least as easy as a crappy car with a hand truck on the other end].

It had a lot of superficial rust, but, broken down, it’s proving easy to deal with.

I cleaned the shafts for the Reeve drive and that’s working fine. The speed control handle would turn, but wouldn’t lock. Cleaned of rust, it works fine and actually locks easy (and now I know how to adjust it).

A drive center was locked in place on the head stock and the indexing pen was rubbing and wouldn’t back off. A lot of penetrating oil and some taps with plastic hammers and soft drift punches and everything is free and moving again. A little light sanding, with oil, then a buff with McGuire’s Mag polish and things are starting to shine, as well as work smooth.

The upper bearings seem to be doing okay, but I’m tempted to drop the forty for new ones, just because. The lower ones might be talking, so those are going to be a “gotta do it” thing and might as well be done before I toss the bed and head back on.

I’ll probably go with a link belt, so I don’t have to disassemble the head and half of the U.S. to get the old one off and a new one on. I believe it’s going to take a 3/8, but the old one will tell.

I was elated to discover the tapers and threaded chucks for my little Jet can all be used on the 12"/36" Rockwell Delta.

The paint shows signs of age and neglect. Said to heck with it and am going to do like another guy did and go with a lighter color. Picked up a can of white primer and cream white oil. It’ll give the HVLP something to do.

Once it’s up and going, I’ll see if I’m happy with the speeds. Somewhere, an on-line manual or other, it’s indicated adjusting the Reeves drive cable will allow me to drop the speed lower than 340 RPM. We’ll see.

Congratulations, Kelly, on your great find! I’d love to have such success here so my husband could have a decent lathe.

Please keep posting about your turning experience. (It might keep some of us out of trouble.) 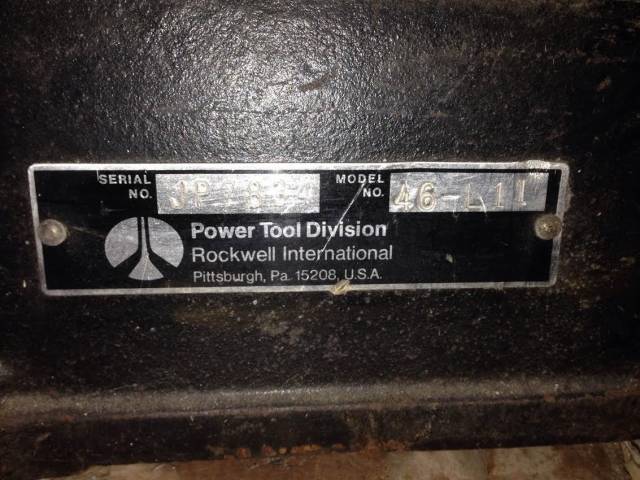 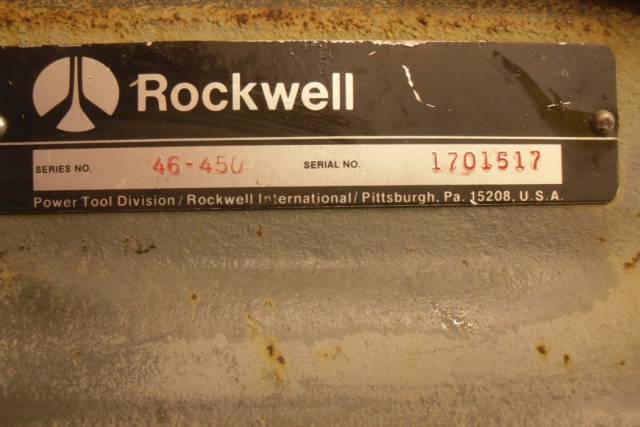 Dis be it Robert. Regardless of outcome, thanks.

Kelly,
On the site www.vintagemachinery is a register of these types of machines,
I didnt find your there but as it has a Rockwell Pittsburg ID plate it means it was manufactured after 1953 when Rockwell moved there.
The serial number 1701517 indicates it was made in 1976.

Why the interest? I used to work for Rockwell Int when they were in Australia and when Boeing and Rayetheon bought some of their business I transfered to Boeing and had the sad task of assisting with the shutting down their manufacturing plant in Victoria and relocating those who wanted to join Boeing.
I did voice my opinion on the sense of the idea at the time but it went ahead anyway.
Rockwell was one of the biggest companies in the 1980s and did mostly Defence work which declined hence the sell off They retained the Commercial Truck division, which incidently made all the loot! and the Rockwell Collins radio division then in those days 80 % of all aircraft had RC radios fitted.

The Rockwell tools you see in the shops today are chinese and they bought the brand name.

So whenever I see a genuine Rockwell Product I get excited!!

Update: www.vintagemachinery.org is the correct address.

Thanks for effort (help), Robert. I’ll probably tuck the info on the back side of the motor cover.

It’s funny you mention having to travel for deals (not this one, of course, but in general). My brother who lives in Montana contacted me (in long island, NY) yesterday to tell me that he wants some kind of metal milling machine he found on Craigslist here in long island. He said it was a good deal. I wouldn’t know either way. But he asked me if I could pick it up and store it. He plans on driving to NY this summer to pick up a few things that can’t be shipped easily. Now that’s a long way to go for a Craigslist deal!