I don’t know how exciting this will be. What can I say, it’s sheathing and shingles. The following two pictures show the upper and lower frieze, including the hurricane ties used on the center rafters: 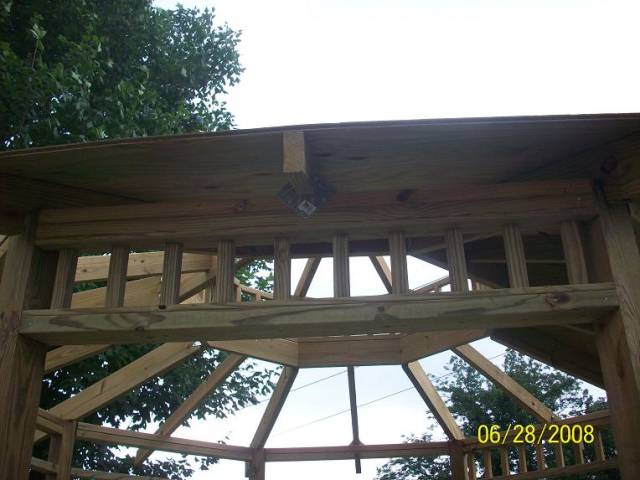 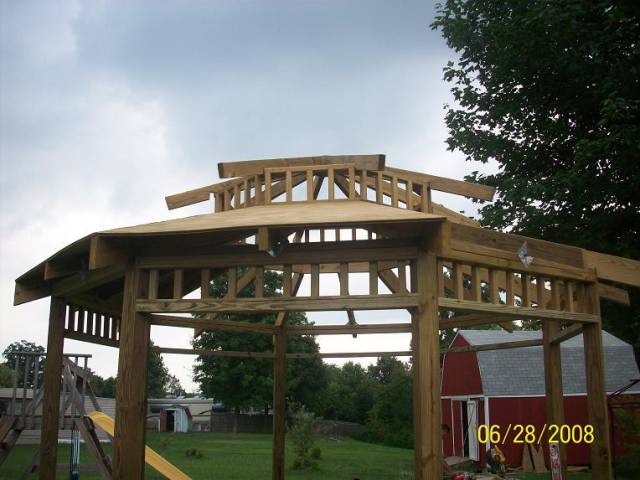 Staining the upper section would be a total pain after the roof is on, so I did as much as I could before the upper sheathing went down: 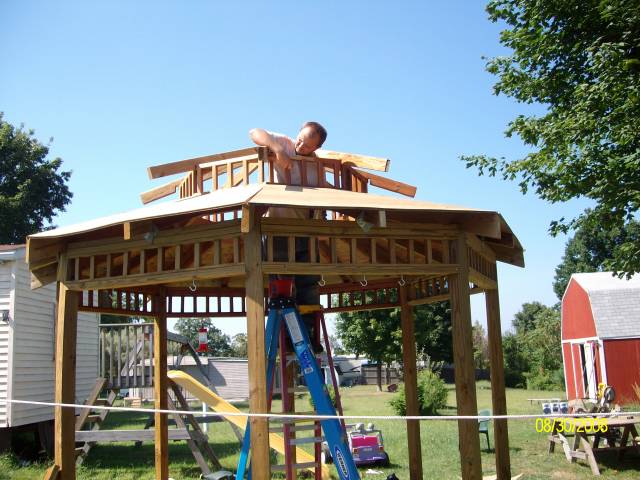 The next image shows the lower sheathing in place. In a perfect world, the cuts should be automatic…but I don’t live in a perfect world. Each piece was measured and cut to fit. Such is life in the roofing world. 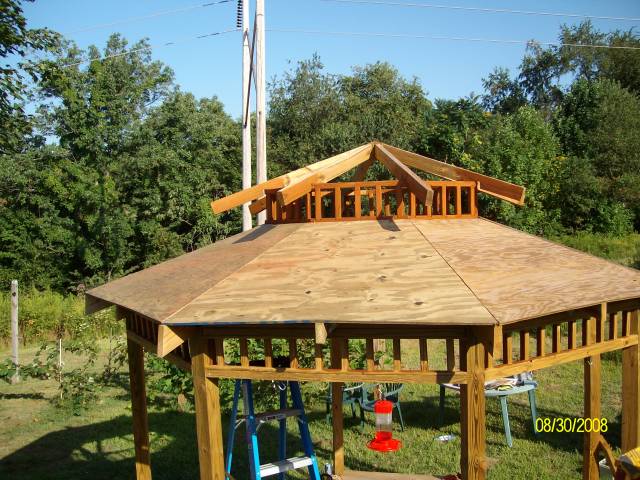 Once the lower sheathing was on I had to install the lower fascia board. I wanted the fascia to cover the ends of the rafters; the wife wanted the rafters exposed. Guess who won that battle. 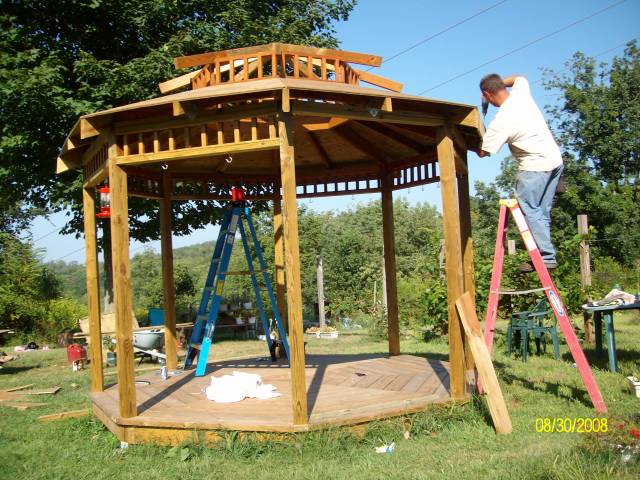 Time to go to the upper roof and cut the tails for the upper fascia. I hated the fact that the ends of the rafters were exposed to the weather, so I tapered them inward a little so the drip edge would help keep them drier. I thought it wouldn’t be to noticeable, I was wrong. The wife spotted it right away and started calling it her pagoda :( 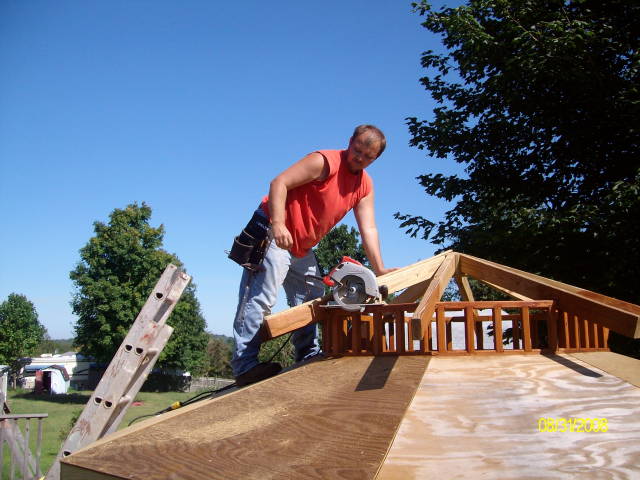 The next three shots are just shingles. I enlisted the help of my best friend Fred simply because he had nothing better to do and chose the wrong day to come over and drink beer. 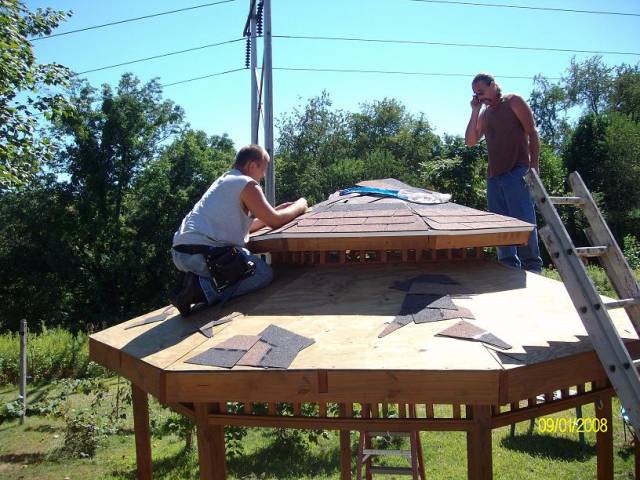 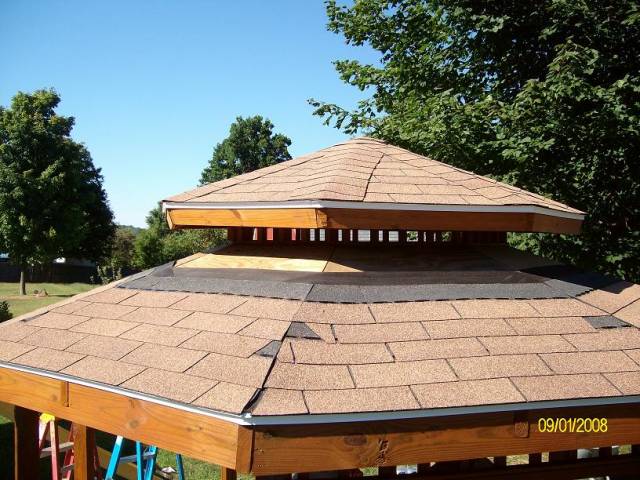 I really hated the white drip edge, but nobody had any brown in stock. Fred says we did it on purpose so it stood out as a contrast. I’ll go along with that.

Thanks folks. There is nothing more frightening than a cancer diagnosis. We were very fortunate in that her type of cancer is slow growing and was caught before it could spread. The first time she was diagnosed, she was pregnant with our next to youngest daughter. That was back in 1992. Because she was pregnant, there was nothing the doctors could do until she delivered. She had the option to abort or wait it out. In my wife’s mind, abortion was never an option.

Glad she beat cancer twice. It must have been tough. The treatment is as harsh as the cancer.

Your wife has sharp sense of alignment. Mine would be across the room and would say " the cabinet is crooked. A hair out of square I would say :)

Fed was a great help. You get him over and the roof is done. I wish I had a friend like that.

I need to add something here. Shortly after this portion of the gazebo was completed, my wife was diagnosed with cancer for the second time in her life. Obviously construction halted while I devoted all of my time to caring for her. Likewise, when I finished the gazebo the following spring, she was still too weak to take many pictures.
I am happy to report that she has now beat cancer twice. This is one tough, wonderful woman I have here ;)