So I have a good friend that came to me with a project. He has a mesa boogie combo amp and he wants to remove the amp and build a box to make it a stand alone head so he can use it with a larger speaker cabinet. I told him a few weeks ago I was getting my hands on this ekki or whatever it is and we decided to use this.

This stuff is incredibly heavy. So Friday night I resawed one board and planed the 2 pieces smooth. Originally it’s about 1-1/4 thick. After resawing, the 2 pieces yielded 7/16 thickness. That’s a little on the light side to make a cabinet for a heavy and fragile tube amp.

The rough boards are about 5-1/2 inches wide and to make this box we need two 8’ boards. When my buddy came over yesterday we looked at the resawed boards and figured they were on the light side, as I thought before, so we took 2 new boards and planed them smooth to about 1" thick.

Then I asked my buddy to place them on the bench out of the way so I could so something. When he lifted all 50 lbs of this material he had second thoughts about using it. Did I mention this stuff is incredibly heavy? It is beautiful, though.

So we went back to the thin stuff. It’s very, very stiff. I think it will be OK once it’s joined together. We’ll see. This is the risk: broken amp or broken back. LOL. My real issue with this thin lumber is that there are a few cracks that may or may not cause any problems after construction. The stuff is reclaimed and the cracks are around the bolt holes (24" O.C.). We cut out the holes, so if no cracks present themselves during construction, maybe there won’t be an issue.

Here is the board after resawing. 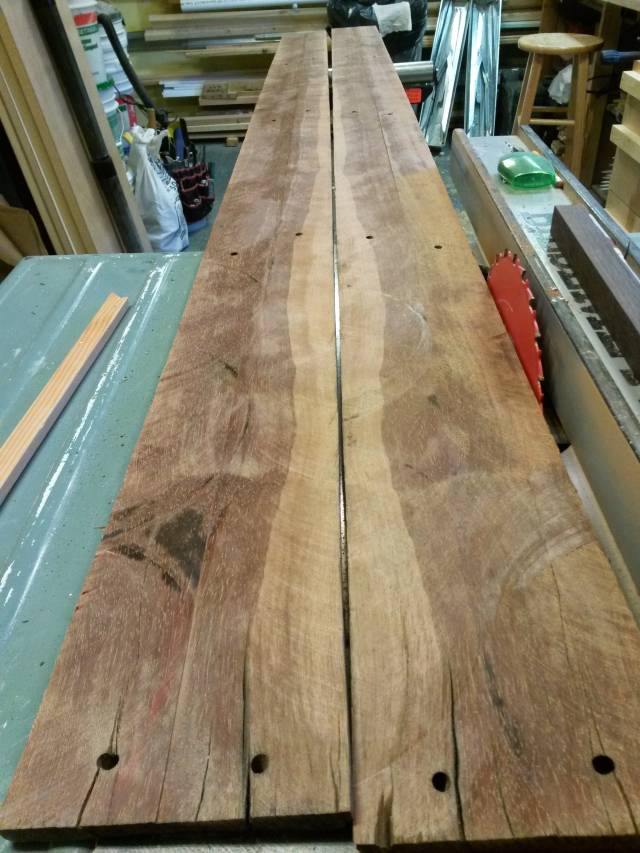 And after planing down to 7/16 thickness – which was the least I could remove and have it smooth. 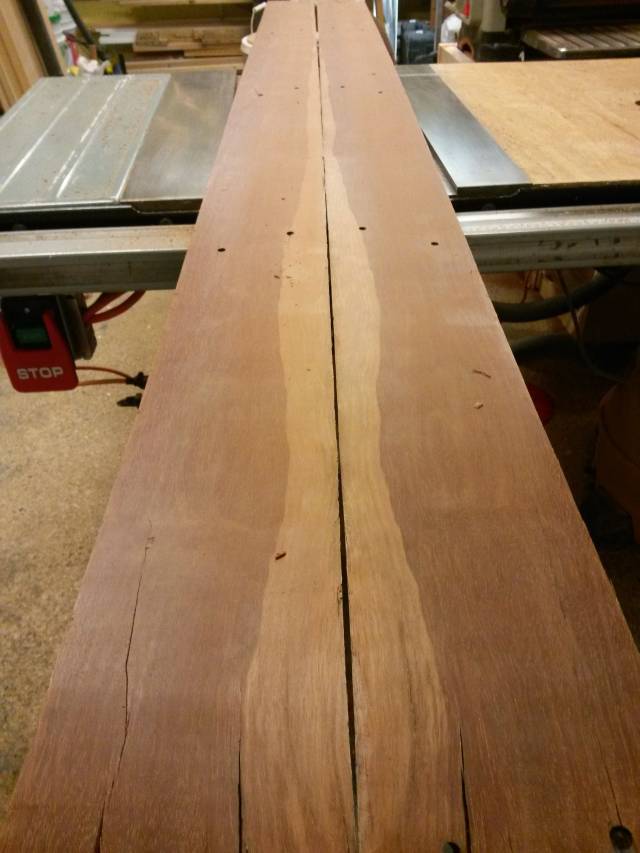 It has some sapwood that we’re going to put on the front and back edges on the top and sides of the box. Also, to add a couple of inches depth to the box and to make it purdy, I’m adding strips of maple, which was a beautiful combination on the mallet I made last week. 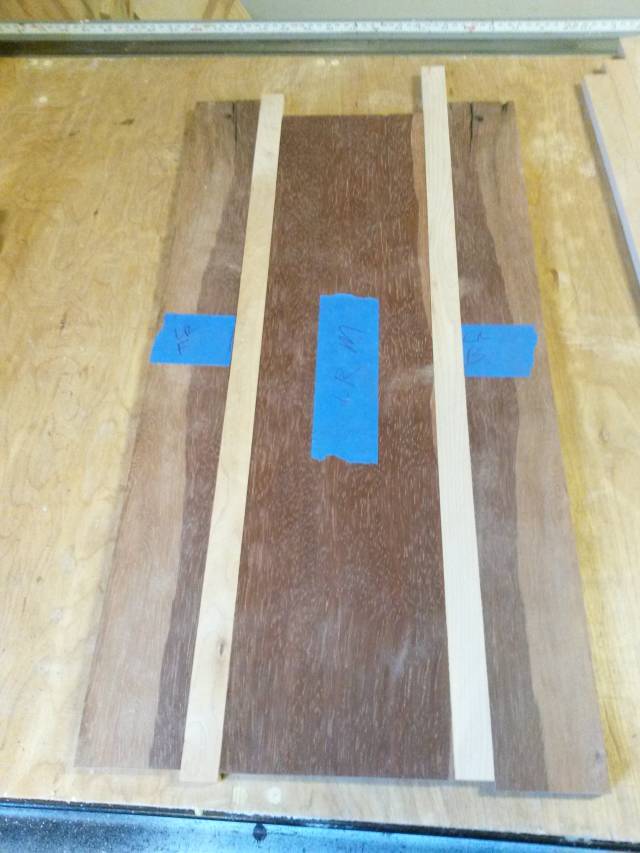 Nothing is glued yet. I read on the wood database that this stuff doesn’t like traditional (PVA) glue because of the oil content so I’m gluing it with gorilla polyurethane glue and biscuits. The box will be constructed using finger joints.

I’m not sure how this is going to work out. It could be a complete failure. I never used gorilla glue before. I never constructed box/finger joints before, although I did make a jig for it, and the material is very thin for the weight it will be carrying. Lots of things up in the air at the moment. Cross your fingers!

Yes that’s what we did the heads, but I gave you the sites in case you want to build a cab to go with it from the old speaker too. It also has some tips on the types of wood and construction of cabinets, that applies to building head enclosures. Basically the material you should use should be as hard and dense and thick as possible. They suggest MDF but the wood you are using is better. It also gives some distances from the edges to place screws even tho you aren’t using that type of joinery. Overall I have built over 50 PA sets of cabinets for various musicians and bands since I was about 15 years old and wish I had these site tools available at the time. You are going to use the finish on the wood without a skin of any type so you will be loosing some strength that vinyl and glue with metal edges would normally add.

Thanks for the advice. The splines would have been faster and easier than biscuits in this case, I think. Wish I saw that before. I just finished gluing up. Never used polyurethane glue before. It is extremely messy stuff. It’s all over everything. Will it sand off OK?

I have had two friends do the exact same thing with Mesa boogie amps. Whatever you replace the old cabs with will be better than OEM. The gorilla glue will be great just put water on the wood before hand, the more water the better gorilla glue works. For the joinery, the finger joints will probably double the surface area for glue. Great idea with biscuits but I would use a spline strip the whole length of the joints as the materials are so different from each other, but that’s just me, I have done those allot with no biscuit jointer available. Also their is no shame in using metal fastening “L” brackets inside to strengthen the corners, you are dealing with a lot of weight and vibration.