This is part 13 in a 14 part series: Surf Fishing Plugs

There is a well known and productive popper made by a company called Superstrike. A popper has a concave mouth and throws water when dragged along the surface. Usually they’re made to float but Superstrike makes one that sinks. It’s very ingenious as it also swims. I have one and only used it under certain conditions. I didn’t catch many fish with it and one day I fouled a cast and broke it in half on a rock (it’s plastic), but didn’t lose it. Well as usual I did not want to pay $25 for a new one so I decided to clone a couple with wood. And I made them out of ekki (my stock of salvaged pier decking) which doesn’t float. I more or less copied the shape and size with a couple of small differences. Since ekki doesn’t float i had to use quite a bit of belly weight to get it to swim upright. In turn, because of the belly weight, I added extra tail weight to make it cast aerodynamically without tumbling. Bear in mind all this was just flying by the seat of my pants – I didn’t do any testing, I just worked with the little experience I had and figured it would probably work ok but wasn’t really sure. And the other small difference was, since I’m not so skillful with carving, and I had to make the mouth concave, I made it quite a bit deeper than the original as I kept trying to fix my mistakes and even out the little bowl I was making

The end result was spectacular. I accidentally stumbled into something great. All Edison, no Tesla. LOL. But this thing turned out to be incredibly versatile. It’s a little heavier than the original, but only by about a 1/2 once. However, since there is no bouyancy it will sink straight to the bottom if I let it. Because the mouth is more concave, it throws more water and also has an affect on how it swims, which unlike the original, has a much tighter wiggle. I can feel it throbbing as it swims. And lastly, because I added so much tail weight to make up for the belly weight, it flies as straight as an arrow and very far. By far the longest casting lure I owned and the very best aerodynamically. It’s a real missile.

So this amazing do it all lure can pop on the surface, or it can be used anywhere in the water column from the very bottom (where no wood lure has ever gone before – literally, even the ones made for deep diving can’t go as deep as this guy) to the top and anywhere in-between. I was catching fish with this when nothing else would work. Then, a couple of days ago I hooked into the fish I’ve been hunting all spring. This beautiful striped bass was a real trophy – bigger than anything I ever caught by far. Probably more than twice as big. Over 30 lbs for sure. She was ripping line off my reel but I managed to turn her around and tire her out. Finally I got the fish up to where I was standing, in the rocks of a jetty. Then I was stupid. My inexperience with big fish really blew up in my face. I lost her while trying to get her up onto the rocks where I was standing. I was so heartbroken. I was going to release her anyway but I wanted a quick measurement and photo. They don’t really count unless they’re landed. That was really upsetting. And on top of that I lost the lure that caught the biggest fish of my life.

That very moment I decided to go into production with these things. I started that same day by cutting and through drilling 14 blanks. I also cut up some maple for a different project. 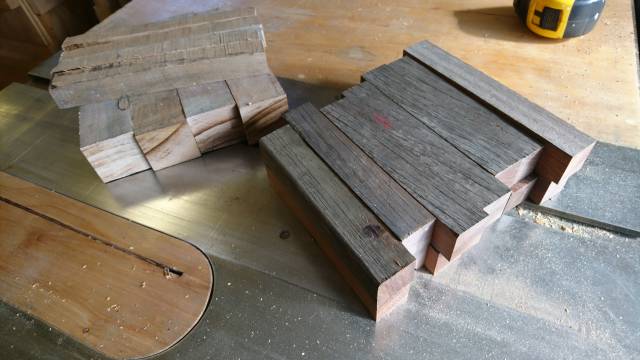 Through drilling this material is no small task. It’s very dense and fill of both minerals and resin. I start by marking the center of each end and punching it. Then on the lathe, I have a drill chuck I use with 1/8" bit to get the holes started. I set the speed to the lowest it goes and very very slowly wind the tail stock to push the blank into the bit. If I try to go faster than a snail it just burns and boils the resin. I had a blank literally explode on me once because so much heat built up inside causing the waste to clog the flutes, which in turn turned the moisture inside into steam with no way to escape. It literally exploded. Lesson learned there. So after both ends are started I finish with a hand drill and a longer bit. It took a couple of hours to do all 14 blanks. It actually took less time to turn them than it did to through drill them.

Then I started turning them. 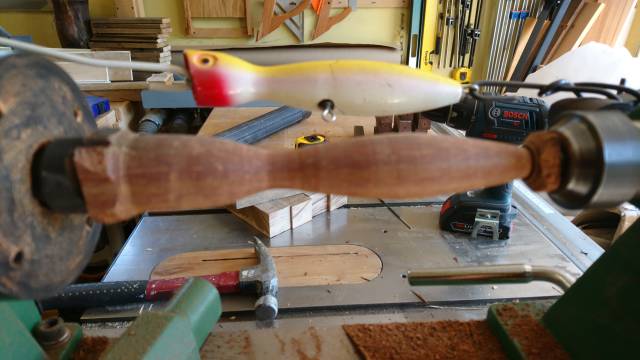 I hung the broken Superstrike one behind to use as a model as I winged it (the crack is on the other side – can’t see it in the photo). I don’t worry too much about trying to get an exact match. Just close enough for gubbemint work, so to speak.

After turning the bodies, with the ends still on, I drilled the belly holes for the swivel and lead weight. When it’s done, a wire will pass through front to back and catch the swivel for the hook. This guarantees the hook cannot be pulled out of the body of the lure. The swivel also acts reduces the amount of leverage The fish can gain on the lure, which helps to prevent the fish from spitting the hook. Also, by not removing the ends, I have a square, flat surface I can use to hold the body down while drilling. 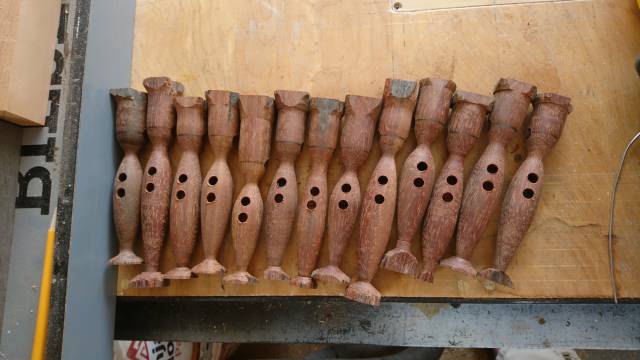 I also used a forstner bit to drill the eyes. I have plastic 3D eyes that get glued in later.

Then I finally cut the ends off. I used my mitre saw to cut a 15° bevel for the mouth. Again, having a square end to make sure the cut was even was really useful. I cut the tail off with a hand saw. 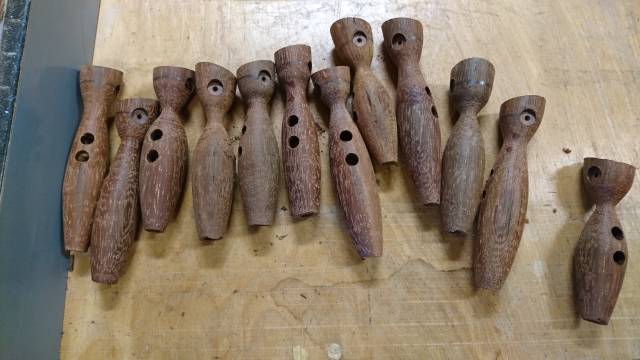 Then lastly I started to mill the mouth using a spur bit on my drill press. I don’t have one the right shape so I have to just wing it. I can’t seem up upload this last photo, so I’ll put it in a comment below.

I only have one body fully milled. This morning I’ll do the rest of the mouths. Then I will do the through wiring, then add the weights, then prime, paint and epoxy and finally add the hooks last.

I started with 14 blanks. One of them blew up on the lathe. The material is full of fissures so this was no surprise. I’m surprised I didn’t lose more. Then one cracked in half while I was drilling the tail. I might be able to save that one. But at least I have 12 to work with. 3 are going into a lure swap, my son will get a couple and I should have 6 or 7 for myself when I’m done. If I go through those I’ll make 20 next time.

Next post will come after painting. Thanks for reading.

If you are looking for some On Track Fishing, feel free to read this article.