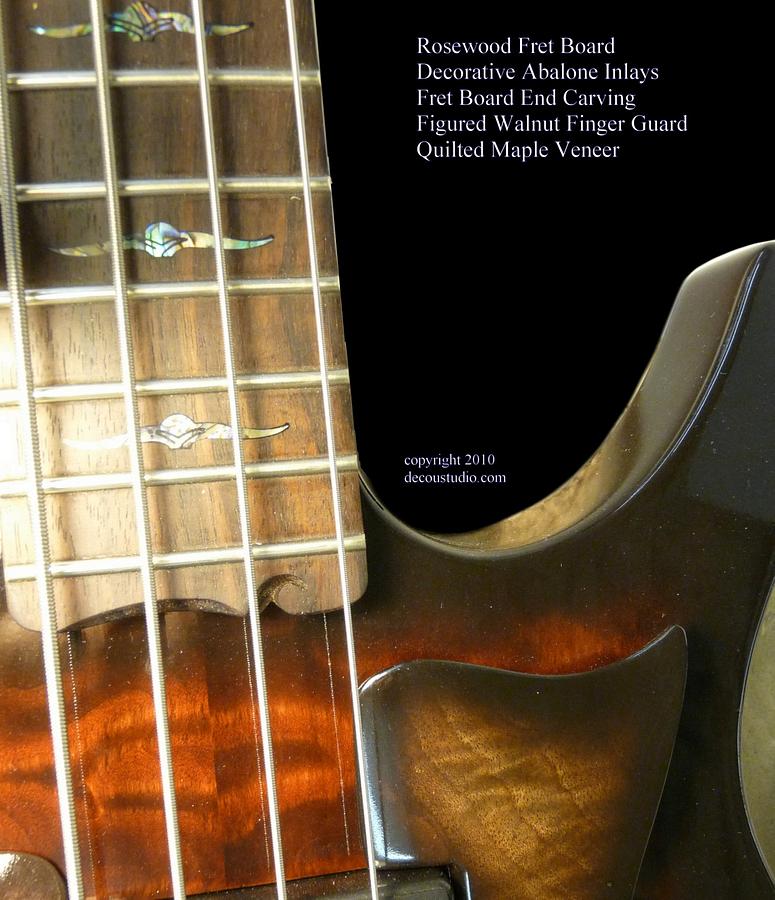 I built this ultra custom 4-String Electric Bass Guitar, utilizing as many decorative details as I could fit on the project. I taught a neighbor’s kid a little about woodworking by building with him a matching custom 6-String Electric Guitar, and I built the Bass while he worked on the 6-String. It was a lot of fun working with him, and we produced some pretty interesting custom guitars. He originally started out wanting his guitar “Blue”, but after seeing the stain coloring and air-brush toning of this Bass Guitar, he opted to match its color. I was going for that old-Maple reddish/brown color you see in historical flintlock firearms produced before 1800 in curly maple. I have produced that color before using the old Nitric Acid process on curly Maple, but this time I was scared to do that after putting in so many hours on the guitars. So, I did this coloring with Dye Stains, an air-brush gun, and also tinting my luthier-quality lacquers.

I have this particular Electric Bass Guitar for sale in my Etsy.com store

Thanks for reading,
Mark A. DeCou

stunning… I’d want to match the colouring as well — gorgeous.
And is the lad going to post his creation?

Another one of you WOW pieces,fantastic.

Beautiful. It’s something I always wanted to do. Does it sound anything like you hoped it to?

Supper Nice Bass, Outstanding Job, not to mention the Great work you did working with the young man. He will have a lifetime of good Memories and gained knowledge in wood working, Well Done!

Inlay fascinates me. Especially when it’s well done, like this. I’ve done the equivalent, but that 1/2" gap around the edges of mine just didn’t seem to pull the thing together.

This caught my eye because I have a friend who comes over to cut much of what he needs to build things like dulcimers and psalterys. Of coarse, there are the occasional thumb pianos, flutes and what have you.

I know nothing about playing ANY musical instrument, but consider most to be pieces of art for the eye and ear.

In spite of my limitations, with regard to playing, I enjoy helping my friend. Our latest endeavor is winding out own pickups.

As with the other things built, I am able to influence my friend’s projects with reminders that merely because something has been done a certain way. We are working on some rather unique approaches to common problems and it’s been fun watching the successes grow.

One example would be regarding the dulcimers. He insisted on building it the way everyone told him to. My take was, a guitar has a much wider face and doesn’t require near the support being called for building a little, narrow dulcimer. In the end, his turned out fine and sounds beautiful (that’s more on him than me).

One of the outside the box approaches was setting the positions of the frets. What a mathematical pain. I had him grind the bottom off a piece of fret stock and we used my inherited tone meter dohicky thingamabobber to locate each fret and it worked will.

Before, a couple frets were off, which meant filling and uglifiying the neck, or sanding the over 1" thick beast down (could have sanded it flat and laminated complementing stock on to that, but. . . .).

Anyway, I always appreciate the more complex builds, like this. Great shtuff.

“Before, a couple frets were off, which meant filling and uglifiying the neck, or sanding the over 1” thick beast down (could have sanded it flat and laminated complementing stock on to that, but. . . .)."