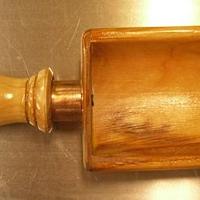 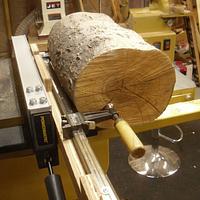 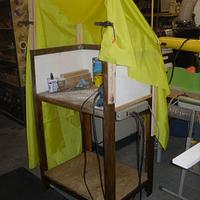 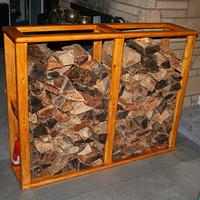 I had to make several circles approximately thirty inches or so in diameter. Also, I found using my log sled to square the ends of the wood, or to cut slabs. required a bit more effort, because I had to support the portion extending beyond the table. As such, I took time out and built an extension.

As has been my habit for several decades, I did as little planning as possible, I just had a few rules:

it had to mount and remove in seconds;

it had to install level with the table to which it attached; and,

it had to support items that extended fifteen or more inches beyond the table, to allow me to do thirty-six inch circles, or to cut slabs off short logs.

To install it, I relied on the front bar the fence rides on. For me, this meant taking advantage of that the front fence support was a hollow, rectangular tube. Part of the table slips into the tube, as can be seen by the pictures.

Having the extension slip in the tube gave a great deal of support, but without interfering with the use of the fence.

The part of the table extension that mounts in the front support was made with about 1/8" slop, so the extension could slid into it with ease. The gap is taken up with a wedge, which is permanently secured to the table. It does an excellent job of securing the table.

The back fence support is angle iron and the back portion of the extension merely rests on it.

To insure the table remains in place, I installed a clamp to the bottom side of the table. It tightens against the fence support quickly using a 10-24 threaded knob.

Cutting forty pound logs a couple feet lot does not seem to affect the stability of the, approximately, three hundred pound saw, even though it’s riding on casters.

If desired, a board could be mounted from the down, at an angle, from the underside of the table to the mobile base, or even to the top of the band saw base to increase support. 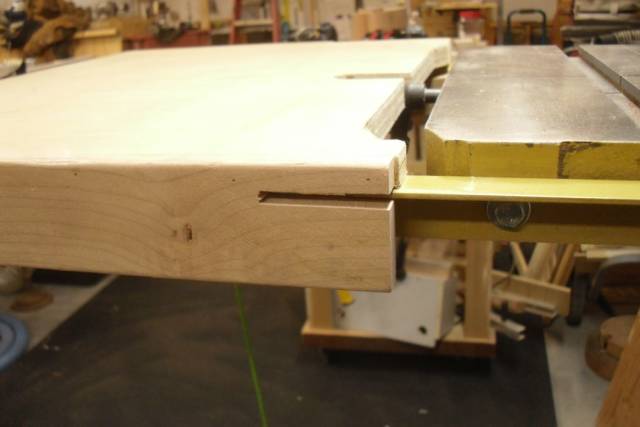 Excellent Idea.
I had the same bandsaw and thought it had too small of a table.
It looks like you have the riser block too.

That looks like a great solution for that bandsaw.

good use of your engineering skills , really good job

Kelly commented about 7 years ago

lanwater, a friend comes over and uses the shop for projects. He bought the riser and a few blades, as a thank you, for the times he found it heated and me not there, or the sandpaper and maid service. . . .

It takes a bit of getting used to, since longer blades seem to show their defects more and require more attention to set up of the system.

I had some gripe with mine with the extension block. The wheel were no longer co-planer.
I also did not like the adjustments for angles and the fixed portion of the table. Overall it was a great saw with lot’s of power.

Kelly commented about 7 years ago

My wheels have never been co-planer, but, as others point out, it seems companies would have changed that over the years, if it were the problem some told us it is. Since I can still make veneers, with a good blade, it’s a non issue.