While exercising my tendency to wander as many rabbit trails as I can find, I followed one of them leading to meteorites. One of the things I learned was, people use metal detectors and magnets, among other things, to verify the possibility a particular find might be an actual meteorite. Of course, that lead me to even more rabbit trails. One was a project – designing and building a poor-man’s metal detector. This is the result.

As much as anything, it’s application is whimsical, since it will never compete with a metal detector and a [far] lessor magnet would suffice. It may even place you in the predicament of having your walking stick stuck to a manhole, which would be horrible [during a walk in the forest].

It started from a 2×4 left over from a cut for framing a closet. I designed it so it could be a walking stick and a magnet.

I buy rare earth magnets for things like tool and bit storage, so I splurged on the latest order and spent nine bucks on one about 1-1/2" in diameter, a quarter inch thick and with nearly one hundred pounds pull.

I was showing it to the wife and set it on the table saw and found it displayed itself quite well (please note – there is nothing supporting it, aside from the magnet at the point of the stick). The couple pound, cut down 2x was no match for the magnet. 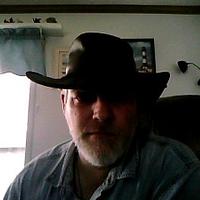 Rustic1 commented over 7 years ago

Carving and Turning is my life

lanwater commented over 7 years ago

That’s pretty neat.
The only time I used a 2×4 in one of my project I regretted that decision. There were too much stress inside the lumber with a lot of small fractures. That project ended in the green bin.

Yours turned out really nice.

Kelly commented over 7 years ago

I’ve been using 2×4′s for fine woodwork forty years. To be fair, they were better back when I started (e.g., tighter grain and actual fir). Back in the day, lumber yard guys told me I couldn’t use lumber for picture frames and such. However, my picture frames, some nearly six feet tall (with tunnel cuts) are still doing fine, over thirty years later.

For the heck of it, I’ll start a new post with a couple examples. Keep in mind, I only use the light ones (low moisture content).

All that said, yep, I’ve split a few 2×4′s into 2×2′s, for construction use, that proved the need for splitters. Others went the other way and tried to spit themselves apart.