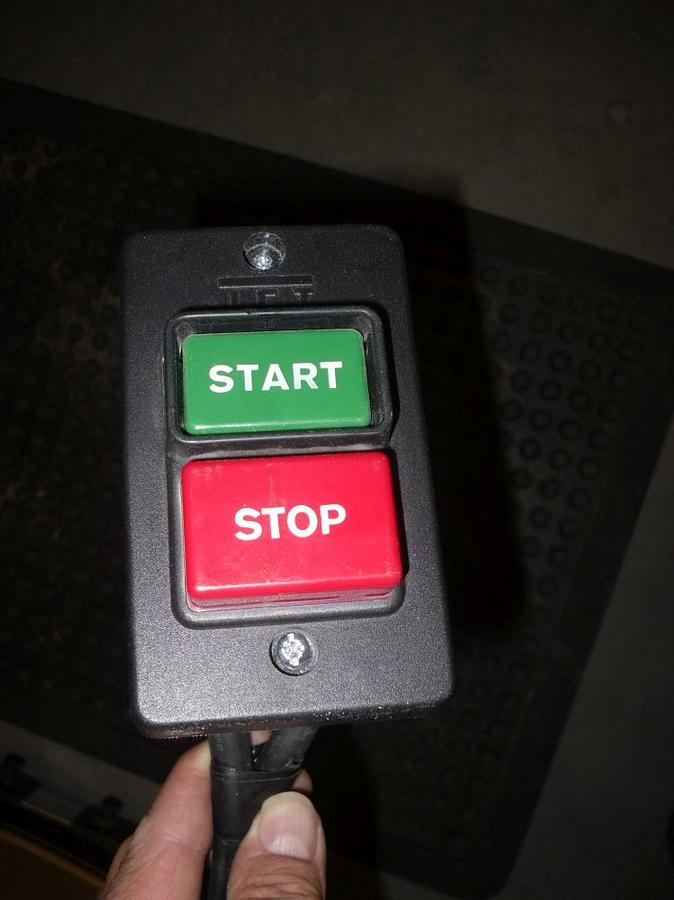 As many know, turning a dust collector(s) off and on can be a nuisance. The fact it’s across the room is bad enough. Then there is that, no mater how you position it, either the ports are in the wrong position, or you have to reach over or around hoses or the collector to get to the switch. Even if the switch is on the right side, you have to reach down to the motor to get to it.

To solve the problem, I removed the switch from the motor housing and installed it in a box at the end of twelve gauge power cords.

The box for my large collector is on the end of ten foot cords, so it can be relocated to tools near it. The smaller collector has enough cord to allow me to position anywhere on the metal can.

To secure the switch box to my saw, or in a convenient place on the collector, I use rare earth magnets that come center-drilled and counter sunk, allowing use of flat head screws to secure them.

On my big collector, I used three small magnets (K&J Magnetics part number B884DCS). They work, but I do need the three and the box can still move, if I get a bit too aggressive pressing buttons.

When I ordered the smaller magnets, I also ordered two larger magnets that have nearly one hundred pounds pull (K&J Magnets, items number MMS-A-X8). I used that one on the smaller collector and it stays put – very put.

The reason for two cords is, 240 volt equipment must have both legs broken/connected, when turning the equipment off and on. My big collector is running 220, so had to be done that way. The little one is running 120, but I plan on adding another 220 line for it and I’d have to add the other cord, so I did it now, rather than have to redo everything later.

It’s nice to be able to, for example, just reach to the left of my band saw to turn the collector off and on.

MJCD:
“you would wire two hots to the 220/240 device, and use one of these ‘leads’ plus the white to support the 110/120 device”
I have been tempted to the that for a while but I chickened out for fear of current imbalance. Is there such a problem?

Consider the application. You have to get the two hots and ground to the [remote] switch, which breaks both hots, if 240, or the hot and neutral, if 120. Then you have to return it to the motor. As such, you either need two cables, or one with five conductors.

The collector [currently] operating off 120 could have been altered with a single conductor, just as you would a household light, but a second would have to be added when the collector was switched for 240 operation. Might as well do it now, while everything was open, rather than reinvent the wheel later.

Another side note: Other than extending the position of the switch, wiring is exactly as Jet sends them out. As such, there would no more current imbalance than if you plugged the units in as they came from the factory.

I have a similar question/situation. I currently have an outlet connected to my table saw switch so that my shop vac comes on simultaneously. Both are 110v. I’m considering converting my saw motor to 220 and I want to keep the same setup. If I run 12/3 and connect one of the switch poles to the outlet, it can be done. However, the “neutral” for 220 operation is the other hot leg. Therefore I’m worried that the saw motor may back feed the outlet which could damage my vac. I reached out to an electrical engineer friend just now. Will advise later what he says.

No imbalance. For a 220 load, each hot acts as both a neutral AND a hot (the current ‘returns’ to the electrical box in an Alternating sequence). In a 110 load, you need the white to provide a return to the electrical box. I have several circuits wired this way, and it is per-Code.

Kelly – I’ll defer to you on this. Suffice it to say that any 220/240 load has to be supported by the same breaker.

Brian – if you run 12/3, with ground, you have two hots, the neutral and ground; so the two hots support the 220 (the neutral is not used); the 110 is supported by one hot and the neutral..
MJCD

My electrical engineer friend said it’s OK. I was worried about phasing from the other hot leg.