I have a job building a screen for a roof terrace deck. The screen covers a mechanical bulkhead with AC condensers on the roof of the bulkhead. So far I have all my layout done and the upper section is done. The wood is cedar. 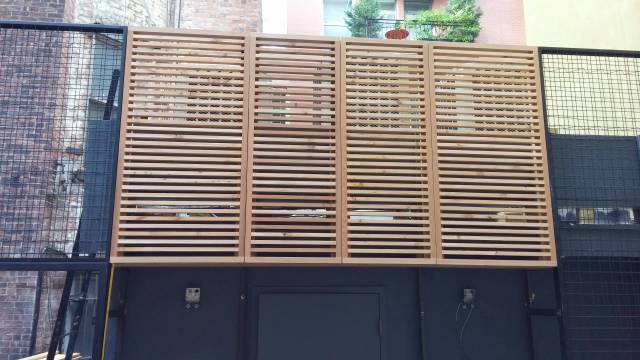 The lower section will be more fixed panels and 2 small gates (like a french door) to allow access to the steel door in the bulkhead. Each gate is about 90″ × 25″.

Anyway, I’m considering pulling out all the stops and using draw peg joinery for the gates, so today I made a little mockup to see how it works. I never tried draw pegs before.

First I started by ripping a 2×4 to 2-1/2", which is the width of the frames on the fixed pieces. Then I made a mortise and tenon joint. Then cut some 3/8 poplar dowel and put a point on each peg. Then I drilled two holes all the way through for 2 straight pegs. Then I drilled another hold for the draw peg, but stopped at the tenon. Then pulled the joint apart and drilled through the tenon about 1/8" lower than the holes in the mortise, then finished of the drilling of the mortise in line with the first hole. Then assembled and hammered the pegs in. 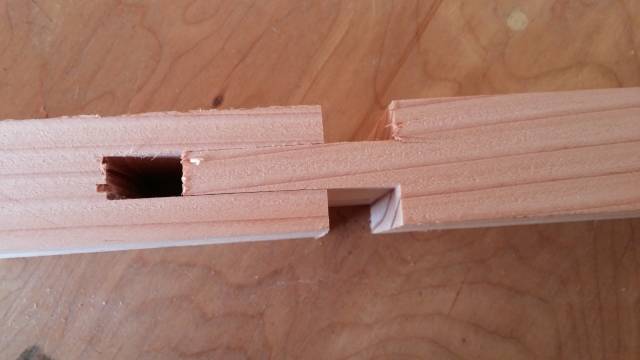 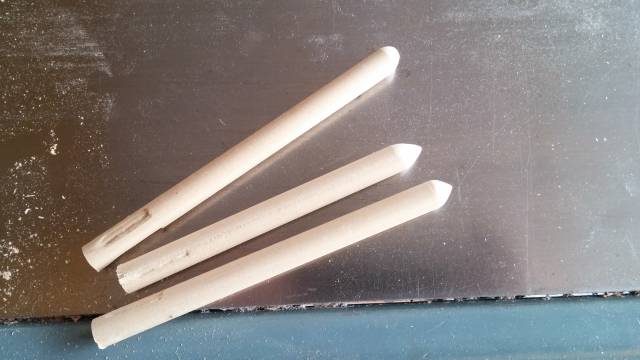 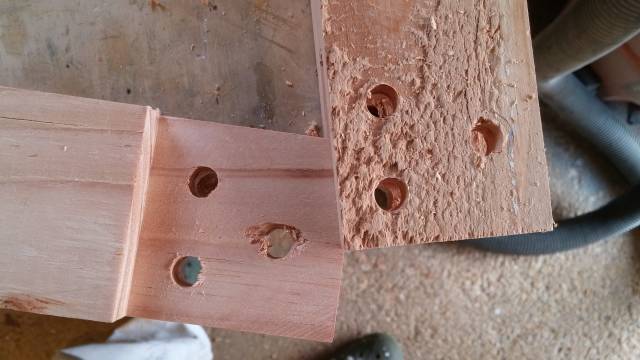 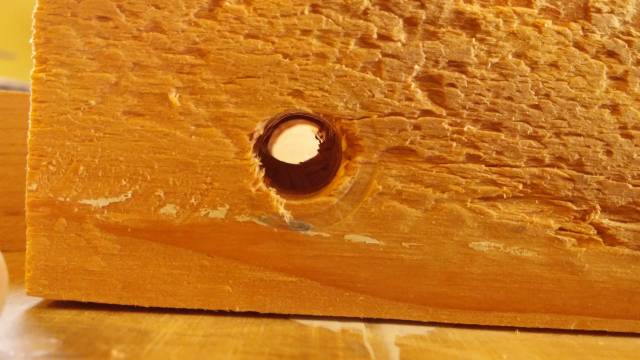 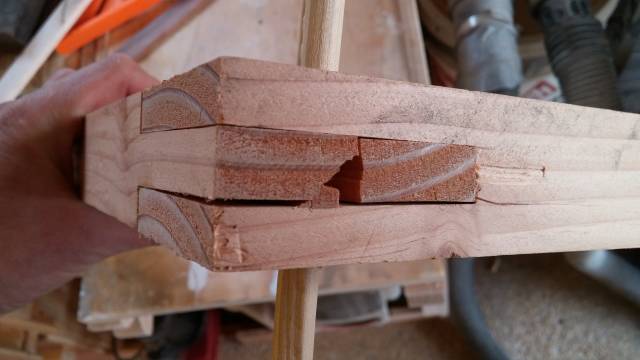 I don’t know if it’s the lumber or if I’m spacing the draw peg hole incorrectly, but the top of the tenon broke when I hammered in the draw peg. When that happened it pushed the joint apart too. I cleaned out the broken pieces and was able to close up the joint some.

The whole thing is not as rigid as I was expecting. There is some small movement if I tug on one side. That leads me to believe in doing the whole thing wrong. Maybe wrong peg locations? Maybe it don’t need the other 2 pegs at all. I don’t know.

I’m not too sure draw bored joints were meant for soft woods like cedar, at least not unless the dimensions are large. They will work better in harder stronger material.
…. but good on ya for giving it a try!

I thought that they only used one draw peg per joint , could be wrong .

You wouldn’t believe how much money they’re spending in this deck and screen. I’m not even sure of the whole cost since I came in after they tossed the first contractor. Most of the materials were there already the deck suits on steel dunnage above the roof. I think I’ve gone through over 20 lbs of fasteners so far and there is sure to be another 10. The deck itself can’t be more than 160 sf.

Anyway, I guess you answered my question, Paul. Soft wood, narrow rails. I guess I’ll pass on the draw pegs this time.

Wen I did my backyard picnick table, I had to use 1/16 offset for the holes. I was using redwood for the top and even after I drove the pegs in the the redwood compressed under pressure that resulted in gaps.

1/16 would work with some fill in for small gaps.

Bruce, I just saw your comment. I think you’re right. Plus after reading this I found that the location of my draw bore was totally wrong. It was at the opposite side of the tenon shoulder when it should be close to the shoulder. I may still go with 3 (one draw bore, two straight pins), but I’ll do the draw pin first, then drill and peg the others after adjusting for square.

Ian, after reading your comment about redwood, I decided to go for it after all. What’s the worst that could happen? LOL.. At least in my favor is that the gates are only 25" wide, so there isn’t a lot of pressure on the joint. Also, they will cover a mechanical room door, so they won’t be used often.

I’m feeling a lot better about this. Hopefully Wednesday I’ll be starting the gates.

Just make sure you put a diagonal on to support the weight of the far (from the hinge) side of the gate, even if it’s just a wire /turnbuckle. That will do more to keep things straight than the joinery will.

Take a look at this: http://lumberjocks.com/projects/90129

Though it’s different from what you trying to do. He does the “Z” a tiny different.

Your project looks very good Brian. I think that using more than one peg will have them potentially working against each other.

The french Z (zed?) Is a neat trick. Diagonal bracing is definitely in the cards.

However, I have to pass on the draw bore after all. :-( I’m under pressure to finish and there’s no time to fiddle with m&t construction. At least I gained some useful knowledge. Next time.