I decided to make plugs for fishing. I live in Long Island, NY and the surf fishing here is legendary. I’m new to it. My son got me into it last year, and this year I went all in. During the fall there were several weeks that I was putting in 6 days of fishing, usually starting around 3am and heading home after dawn.

I grew up in a very rural place. Long Island is the opposite of that and the beach at 3am is about the only solitude I can find. Even the other fishermen don’t go out that early often. I’m usually the only car in the lot when I arrive. It’s very peaceful, yet exciting at the same time. Wading in the pounding surf in the dark and hooking up to a big fish is thrilling stuff, indeed.

So being a woodworker, naturally I’m attracted to the idea of making my own lures. I hope to get a lathe soon. I’ve been keeping my eyes on Craigslist looking for a small one. If I don’t find one I’ll head off to harbour freight in February.

In the meantime I’m making a few that don’t require a lathe. These are called stick shadd. I painted them in what’s known as chicken scratch paint scheme (mostly yellow with black dots). The large black dot behind the head is a feature found on menhaden, a bait fish also known as bunker. They grow up to 12" long and striped bass can’t resist a wounded one, hence the red paint. 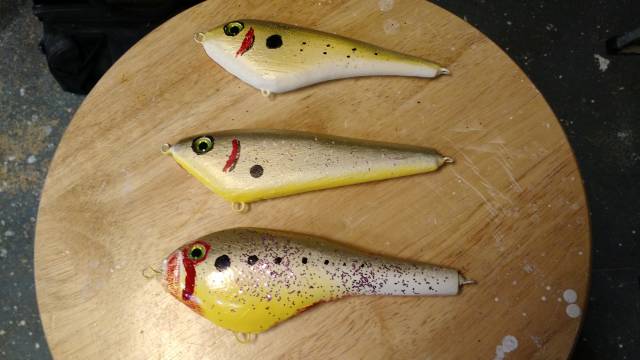 I’ve only swam the bottom one. At a slow to moderate retrieve, it swims along the surface in a gentle side by side motion leaving a fairly large wake. A gentle twitch of the rod sends it diving and swimming erratically. It has a nice action.

I floated the other 2 in a bucket and they appear to have the same buoyancy characteristics as the big one. I’ll test it out hopefully tomorrow. They all still need a couple more coats of spar urethane. Most guys use epoxy to seal their plugs, but I use what I have. I don’t think it will be an issue.

To make these, I started by slicing the blank in half lengthwise. Then I cut a channel for the wire. These are through wired and should stand up to anything I’ll be able to catch. Even if the plug gets cut in half I won’t lose the fish this way.

Then I wrapped the front loop in the wire, which is approx 20 awg stainless annealed wire, then shaped it to fit the channels I cut in the 2 halves of the blank, then glued the 2 halves together with the wire inside using titebond 3. Again, most guys use epoxy because it’s 100% waterproof, but I use what I have, and I think it’s sufficient.

Then I used a coping saw to trim it to rough shape, then I shaped it with a rasp and file. After shaping, I drilled some holes in the bottom for the weights. Then I melted lead into the holes and covered them with bondo. Then I sanded the whole thing to it’s finish sanding and dunked it into BIN primer. More light sanding and then I dabbed epoxy glue into the holes around the wires. Then I painted with spray paint and glitter. Hopefully the glitter catches some fat cow’s eye at dusk one evening next spring. ;-) then finally finishing it off with a few coats of spar urethane.

One of the 2 small ones will be a gift for my son. Probably the smallest one because I think it’s the nicest looking one.

These floating stick shadds don’t handle the surf too well. They just get tossed around. I’ll be using them in the bay where it’s calm. The wake they make will hopefully be too tantalizing for a big bass to turn it’s nose at. :-)