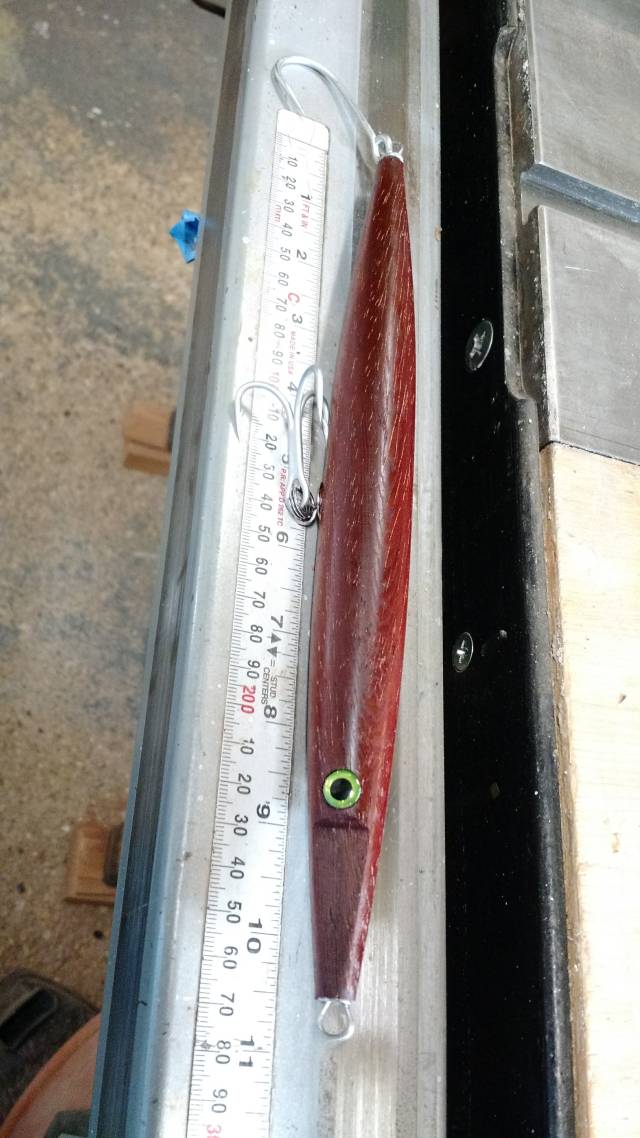 A needle is supposed to present like a needlefish. Long and slender with no real swimming action. Bass go for it, though (even though I’ve never caught anything yet on a needle, but that’s another story…).

This one is a Wadd needle. The story goes something like this. In the old days, hooks weren’t very strong and someone came up with an idea for a very large plug whose only job was to carry extra large hooks to go after the big cow stripers. For whatever reason, the guy used a needle design, but made it extra large. When it came time to name it, due to the size and shape, someone mentioned something about comparing it to Johnny Wadd – a male porn star at the time – and the name stuck. Its funny how things like that happen. One person makes a joke and forevermore the name sticks. The banana plug I made got its name after a year of use by its creator, Jack Frech, when another fisherman made a comment about how it looks like a banana. Forevermore the name became “banana plug”. Voilà the Wadd needle. :-)

I’m sure lots of woodworking tools, joints, etc found their names in the same fashion, but most are so old nobody can find the etymology.

Anyway, this guy is made from ekki (which I have a ton of and will be dulling my tools with for a long time to come). Ekki is so full of resin that its naturally waterproof. No finish is necessary, but I wiped on some danish oil because I like how it looks. This stuff is so hard that I don’t need grommets, normally used to protect the wood from stress from the wires and hooks getting pulled on. But I used grommets anyway because I like the look of it. It was extremely difficult to through drill. The first blank I tried to drill literally exploded. The resin inside the wood boiled from the heat of drilling, but the bit prevented the steam from escaping. BOOM! It cracked in half lengthwise. After that I took to drilling in 1/2" increments, each time pulling the bit out and cleaning it before going back in for another half inch.

Lenght is about 10-1/2" and it weighs 3-7/8 oz. I chamfered the nose hoping to get a little swim action when its jerked. I haven’t tested it yet. It is so big it doesn’t fit in my surf bag. I’ll have to figure out a way to carry it.

I use zinsser sanding sealer to seal the lure bodies. It’s food safe dewaxed shellac. But it doesn’t hold up as well as oil, which penetrates. BLO would take a week to dry one coat. I can do 2 coats of shellac in an hour.

But that’s all under the paint anyway, so I use epoxy over the paint. It’s pretty durable.

For this guy above I’m not painting and because the wood is basically titanium LOL it’s going to stay unfinished. The only reason for the Danish oil was aesthetic preference, which will likely only last until it’s first use. Basically, the Danish oil is only for pre-use photographs.

I’m curious to know if you have ever used or do use shellac as a finish on any of your wood bodied lures? I wonder if fish can ‘taste’ or smell the oil-based finish on the lures, regardless of how long they have had to dry/cure. Shellac is hard, durable, non-toxic, eatable. It dries faster than any other finish I am aware of. It also dissolves itself, so at a later date you can use a new application to rejuvenate the old. It’s also a very shiny finish, coming in clear to various shades of amber.