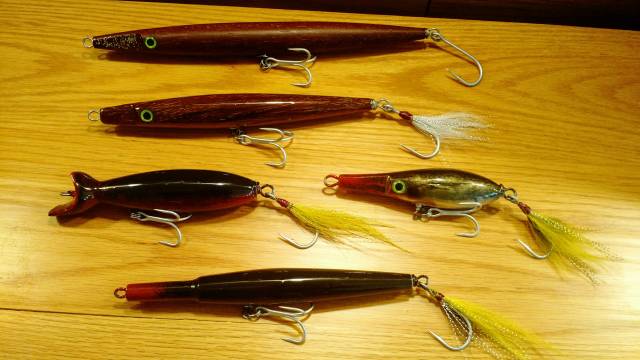 Night time is the right time for the big ones. Stripers have not awesome vision but they do have very adaptive eyes. I read recently a scientific article about striper vision that confirmed the general consensus on the beach, which is that their eyes actually change at dawn and dusk. The cones in their eyes extend and the rods recede at dawn and vise versa at dusk. This accounts for a general lack of activity in that half hour before and after it gets light/dark. The cones are color receptors and the rods are light receptors. Our pupils perform this function but I understand that stripers have fixed pupils. So they see color better during the day and shadows better at night. The old adage is that bright colors work best on bright (moonlit) nights and dark colors work best on dark nights. I think the logic is that a dark sillouette stands out against a relatively lighter background (the surface of the water as they look up). I don’t know if this is true or not. I’ve done best at night with yellow consistently. But the 3 lowest ones in the picture will likely be mainstays in my bag, since I mostly fish at night. I usually go to bed at 8pm and wake up at 2am to head out. That way my fishing doesn’t disturb my family time very much.

Anyway, they are all made of ekki except the bottle plug, which is the lower left. That one is cedar. The one on the right next to it is my version of a Superstrike bullet. I haven’t tried any of them yet. I’m waiting for a warmer day to test them out. Spring is close!

It’s true. It really is one of those things that really draws you in. And believe me, in on the mild side. There are guys that actually swim out to stand on boulders in the middle of the night in November. I won’t even step foot on the jetty at night for fear of falling in and getting swot out to sea. The current is very strong. It can be crazy at times, especially when the surf is pounding.

Those things are top notch Brian. I have a couple of striper fishermen friends and to say they are passionate is an understatement. Like getting up at 200am to go fishing. Ha ha. Goodluck.