Missed the curves contest by a few days :(

Oh well. Maybe next time. I just finished assembling my project, which is a side table for outside at the entrance of our house. I’ll post it as a creation when it’s done.

I was inspired by Ianwater’s curve leg picnic table and decided to make curved legs using a similar method. I posted already about the form and glue up. I made the last leg last night and today I started assembly. I made the top a couple of weekends ago.

Here’s one leg in the form. 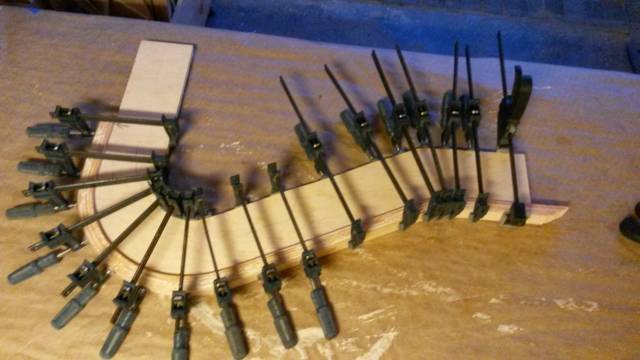 Here are the 4 legs before trimming. They’re covered in glue so I trimmed off the edges on the table saw before running it through the planer to straighten the edges and make them a uniform thickness. 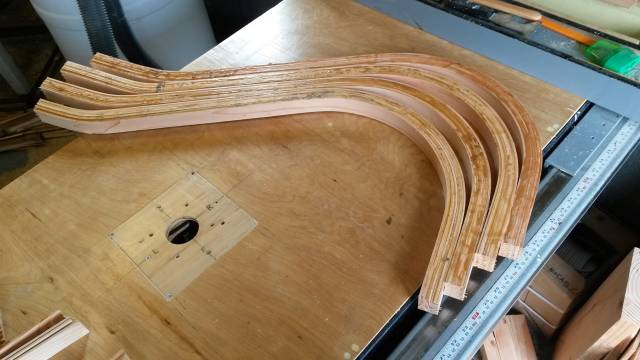 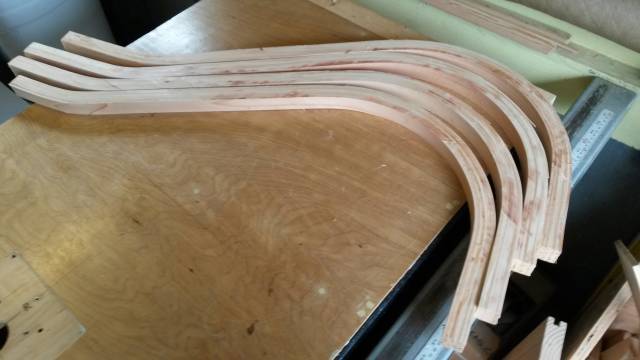 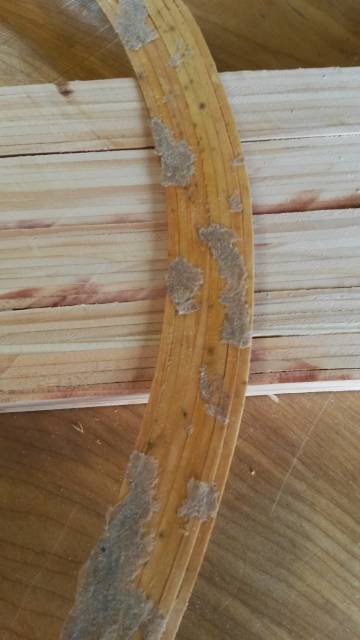 That’s what the wedge looked like before trimming. Lots of squeeze out and paper stuck to it. I didn’t want that crap going through the planer.

To attach the legs I just glued them to the underside of the top with 2 deck screws per leg. The stretchers were an afterthought. They were retrofit into the legs. Just glued butt joints and trim screws. I filled the holes with wood filler. I’m waiting for it to dry before sanding and starting to paint. Here’s the assembled table. 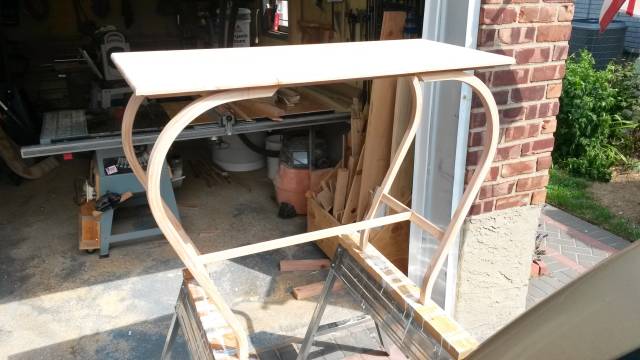 I plan to paint it with oil based enamel. Red and white. Time to stir the BIN. :)

By the way, the whole thing is made out of Lowe’s tubafors. It’s getting painted anyway so the knots and such can be filled and no one is the wiser.

It is inspiring isn’t it? What I mean by that is I was inspired by Ianwater’s bent lamination project too. It’s really easy to understand and to do and you can easily and up with really great looking results. I think if I do this again it will be with a hardwood. The edges of the lamination -and the ends as well -are really beautiful after cleaning up. Exposing the top of the leg, for example, could be a really beautiful design element. With my Douglas fir tubafor strips, somehow I accidentally ended up crossing the grain patterns so that the ends looked like a zig zag. It looked great. Some actual planning could make it appear really beautiful.

Wonderful work on this Brian, a shame you missed the curves deadline, it would have been a great entry. Maybe another time. I am not trying to criticize or edit your design or suggest that you change it, but for some reason I can clearly see it with an oval top. don’t ask me why, I know nothing about design. Maybe I have seen something like that before with curved legs and the memory is superimposing that image on my small brain. I find this inspiring and I would like to try bent lamination some time.

That’s looking great Brian! As graceful as those curves are, I’m wondering if you could have steam bent them. Not knocking the bent laminations by any means. My brain has been in steam bending mode lately lol.