I found some hardwood at a local lumber middleman, none of our mills have any type right now and might not until spring. I even had to order this birch from off island at an outlandish price. Four boards for over $200 and the condition is atrocious. 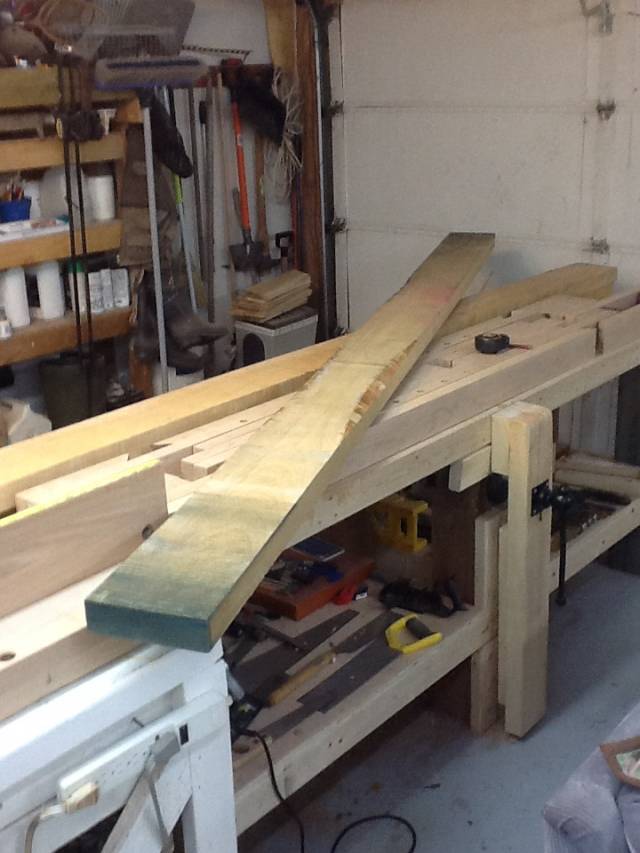 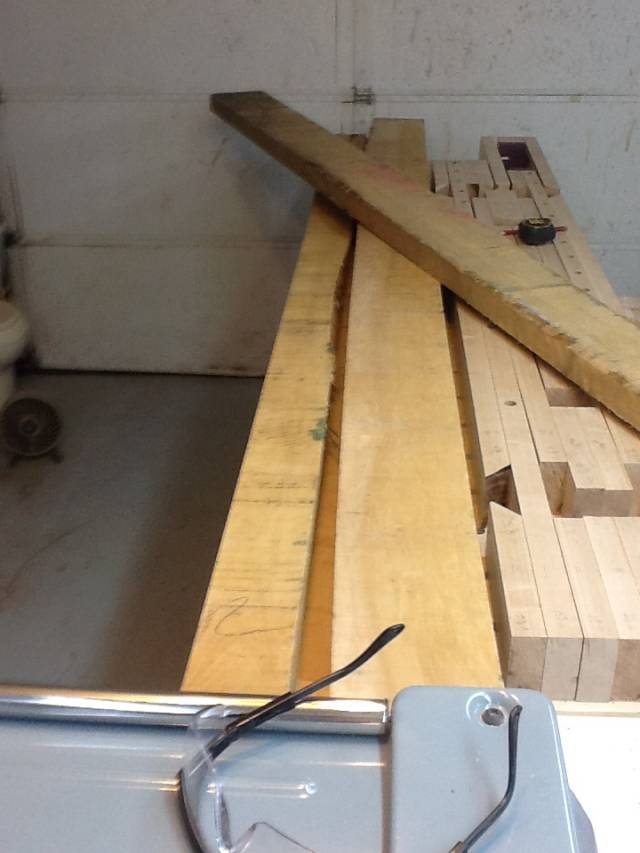 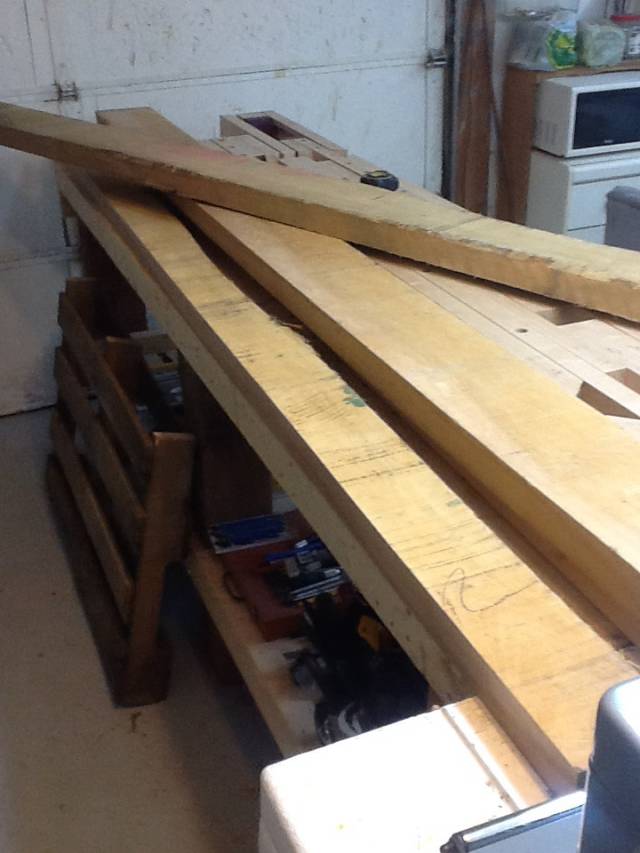 It took 5 days to get here as well. I need the stretcher though and can’t complete the build without them. It is going to take a bit of planer work to get them into usable shape. 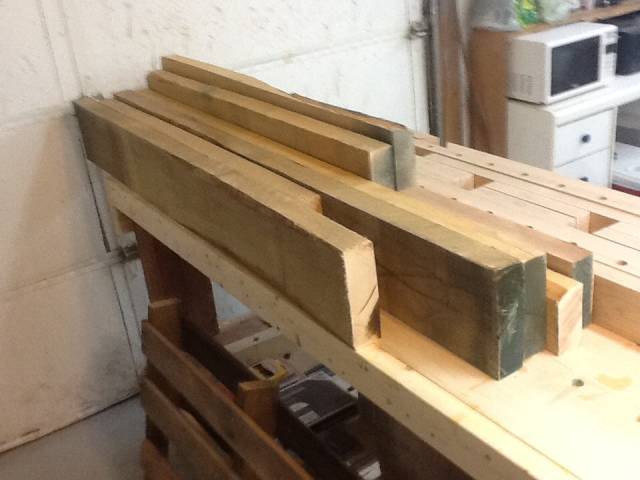 I was able to plane them down to 1 3/4" so they will make up in weight for the trimmed legs!

But, when picking up those I scored a pallet that has oak, maple, and looks like mohagany in it. In the mean time while I am waiting for a hand to run the planer I decided to tidy up a few loose ends. Building small items shows some immediate results. 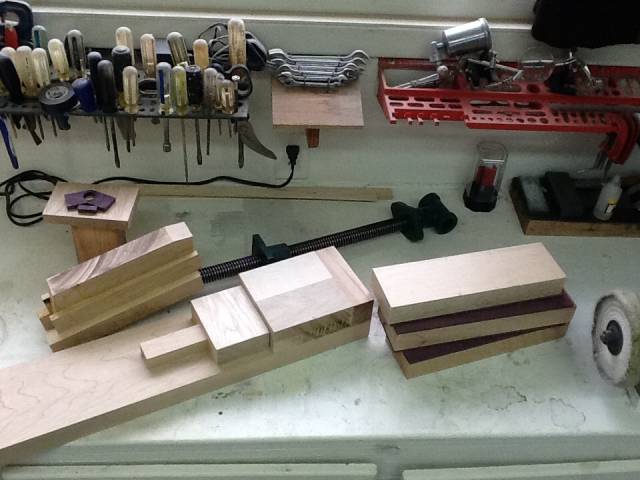 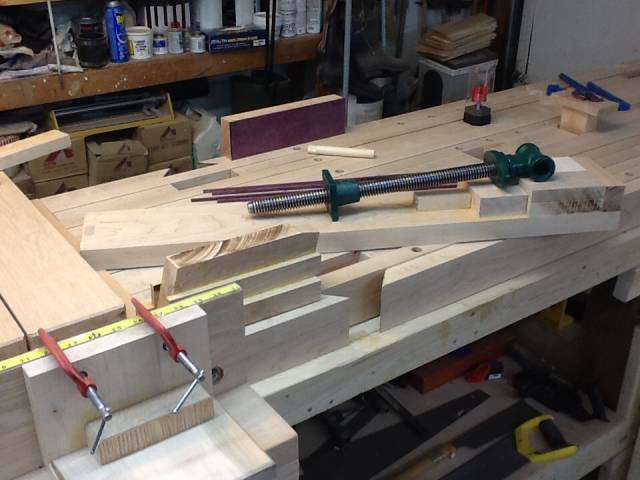 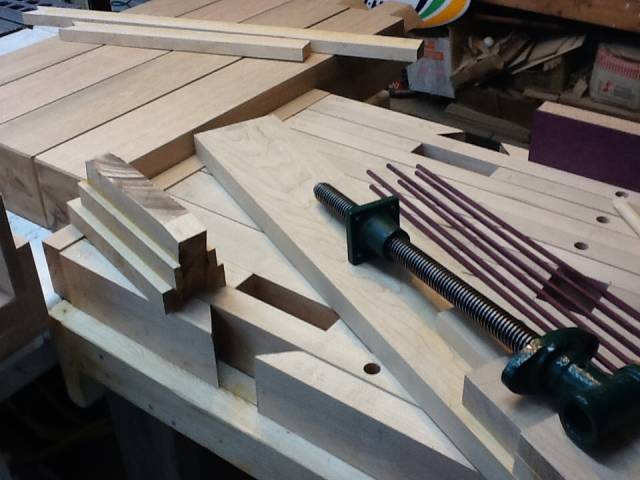 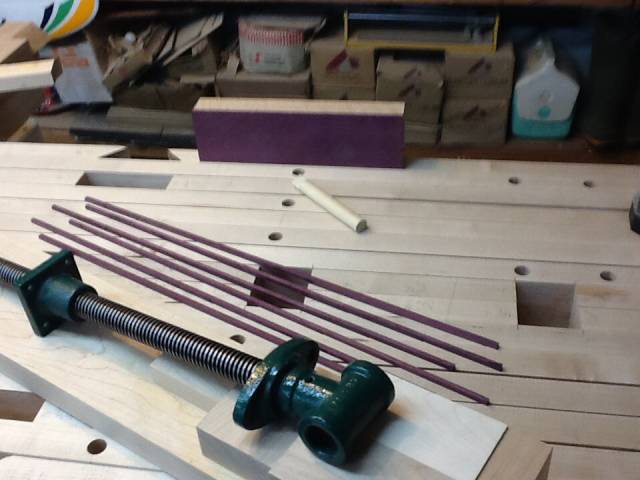 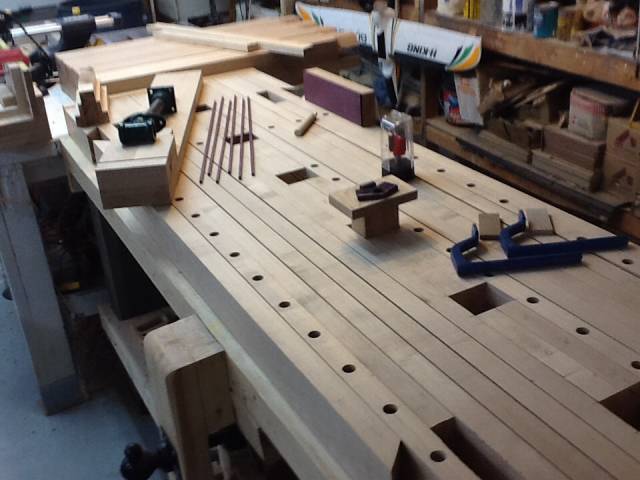 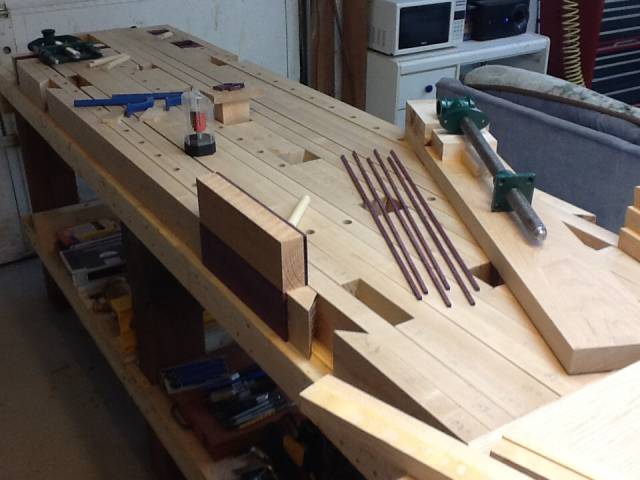 The plane block stop is creative if nothing else. The obscure shape of the crochet is throwing people off, but once it is carved out it will be self explanatory. The leg Vise chop has some rough lumber added too as well as the screw temp installed. All of the Vise chops now have their decorative Purple Heart faces. The inlay pieces are cut up for the plane block stop holes decoration. I even made a couple of batten sticks. I finally purchased the cabinetmakers vise, it’s lighter green than the other vise colours, but it’s at least green. 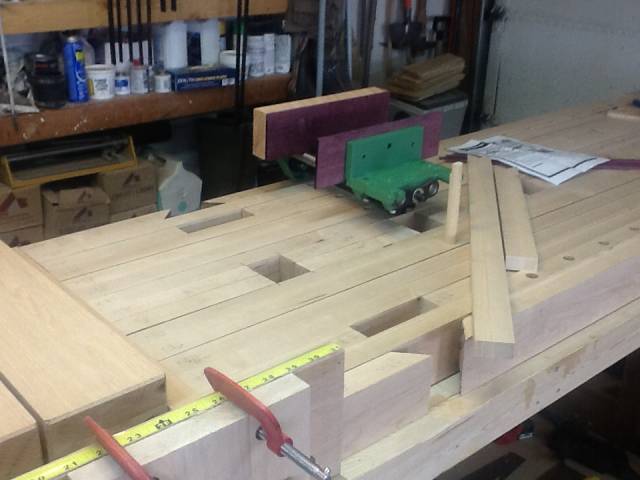 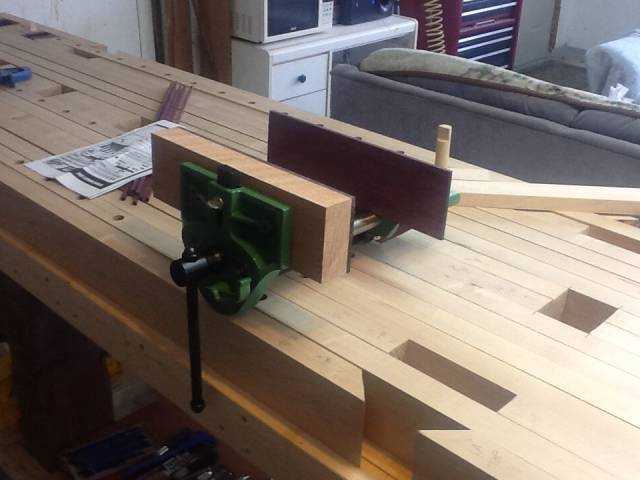 I have started laying out the first two table top glue ups and took the plunge starting to laminate the top. I glued up the four straightest boards from each side of the bench top. 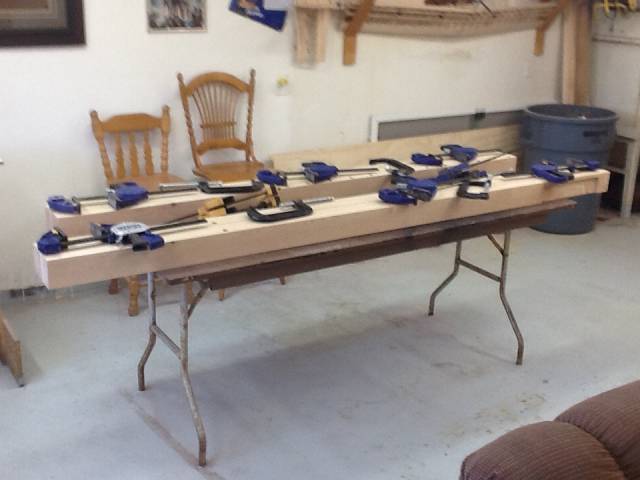 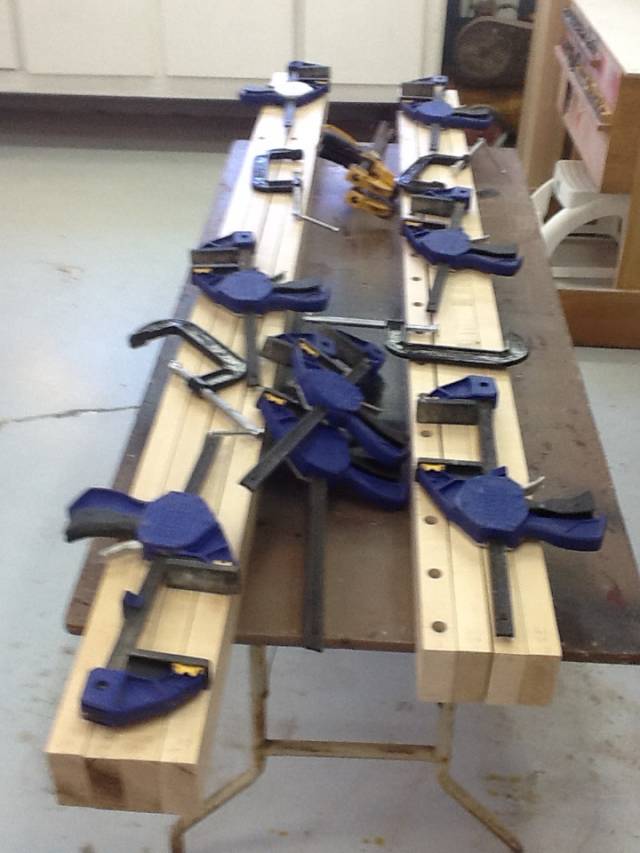 That way it will have a straight base to glue the rest of the halves of the top together. I am now starting to glue up the centre section taking advantage of how straight the halves turned out. I had planed to run them thru the planer once each half reached 12" wide, however the difference in height in any place on them is less than a sixty fourth, so it seems pointless, so I will just be doing a final routering with rails and a sled once it’s all completed. This will make it easier for me as I would have had to get four people to feed them through the planer. Around here if you invite people over to do work for you while the NFL Sunday is on you are expected to supply the chilli and beers. 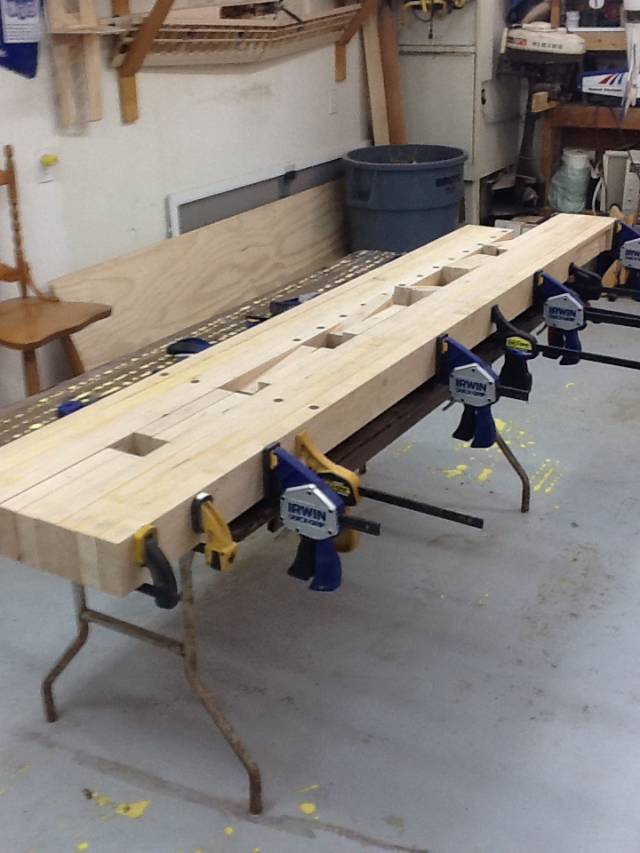 The next day or so will be finishing gluing up the benchtop. As always, if you have any questions or suggestions fire away.

I do the same mike. But woodworking for me is therapy as well. It helps maintain the little bit of mobility I still have in my left hand, and keeping my mind busy trying not to make mistakes keeps the PTSD at bay most of the time lol. During my working careers time was always of essence and their were always deadlines and penalties, now I just do what I can do wishing I could do more.

If you do woodworking for your own pleasure like I do, it really doesn’t matter how long a project takes. I work very slow (using most of the time to correct my mistakes), but I feel that completing a project and doing it to the best of your ability is a lot more important than how quickly it is done.

Ahhh ok, I’m terrible at getting sarcasm. I feel like I am going so slow some days so I took it to heart, no biggie.

Sorry to hear about your health issues. Your are actually moving really fast. In fact that’s one of the fastest bench build I have seen so far.
I was trying to put some humor in my comment.

A little progress is much better than no progress, and your glue-up came out great too. it is all looking very good so far. I have similar quick release bench vises and I really love them, they are so versatile.

The bonus is the size of the birch, I hadn’t actually measured it until I started to plane. I will have a full 1 3/4" thickness and the widths will be a full 7" and 4 1/2" so I guess the 3 hours on the planer was worth it. About the moving on, some days I can only work for an hour, other times I am paralized for 3 days or so. I think I’m moving along pretty well for the shape I’m in. I finished planing and sawing, now to run the boards thru the router table to finish joining. 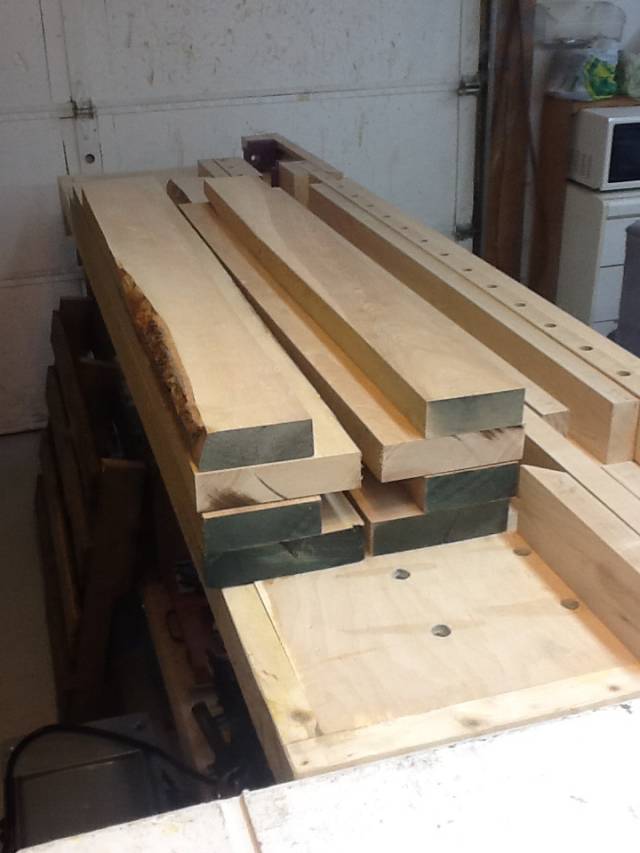 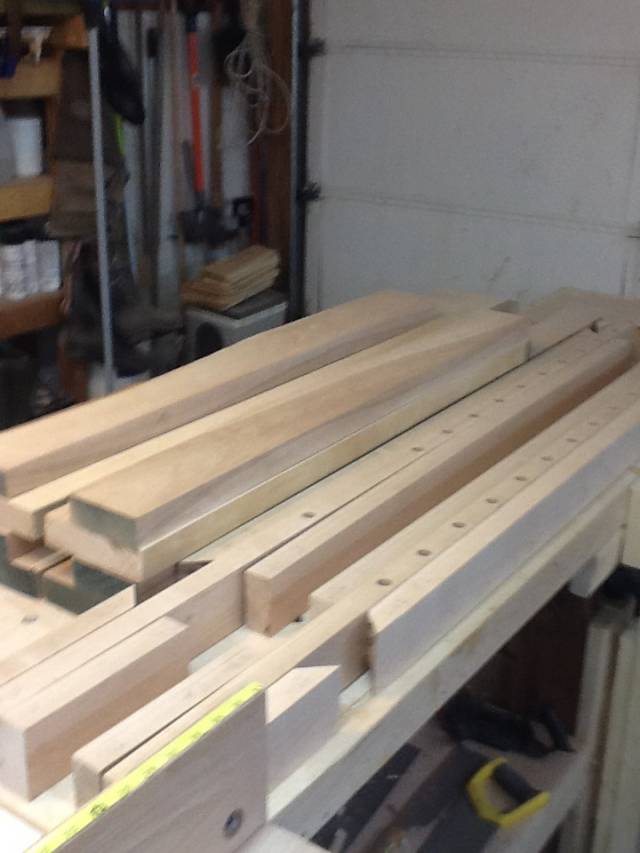 It’s unfortunate you could not get decent lumber for the stretchers. There is quite a bit of cleanup to do. Well, at least you can move forward with build. We have been kind of anxious to move on here :)

I like the middle blocks. It will help mounting holder/plates for all the Veritas gadgets