Horn Speakers #2: Time for the rubber to hit the road

This is part 2 in a 4 part series: Horn Speakers 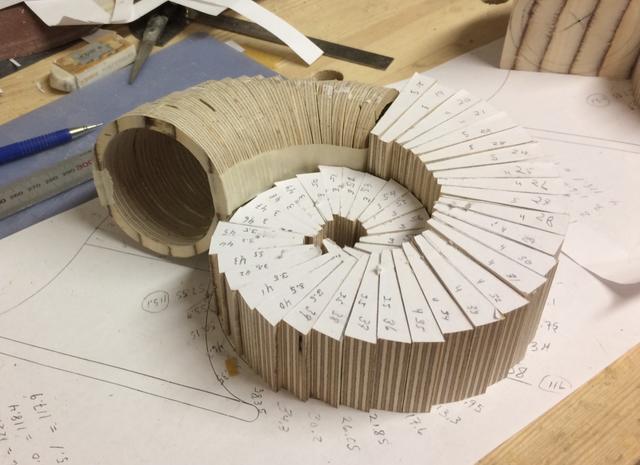 After figuring out that I needed about 56 square pieces of 3/4" plywood all cut to different sizes I marked them out on a baltic birch platter. I had some half of full size platters in the right dimension. Unfortunately I didn’t have room to cut the marked out strips on the table saw so I had to use my circle saw instead. These formed a 47" long thin wedge shaped strip with the individually marked pieces becoming smaller towards the end.

This is how I had to cut the strips with the platter on top of my combi machine: 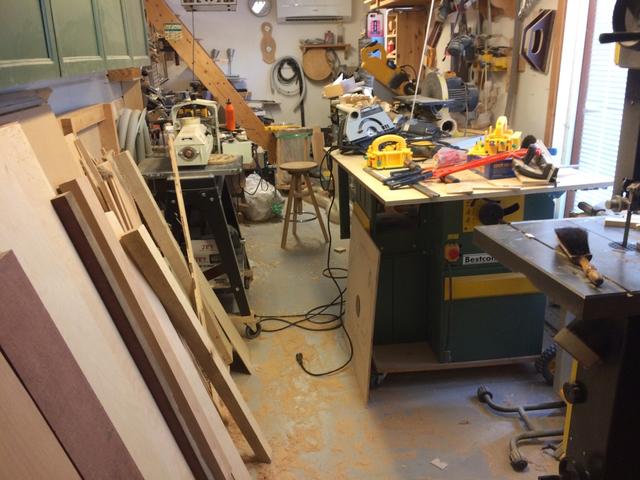 Critical to these strips was that the outboard edge was perfectly straight and the inboard edge was perfectly parallel with the outside edge. The dimensions of each square were determined by taking measurements directly from the pattern. You might notice that the same nos. appear on the strip together. This is because I am marking out the pieces for two horns at once. 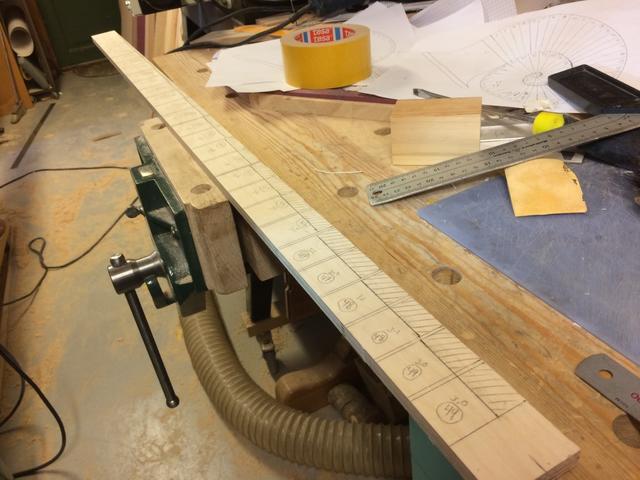 The individual pieces for each strip were marked off and numbered to help keep track of their position on the pattern. The width of each piece was based on it’s length to create a square. I cut each strip a little wider than necessary so I could could cut to final width on my tablesaw. This was to make sure the cut was nice and straight. The outside edges that I cut with my circle saw were routed straight prior to marking out. 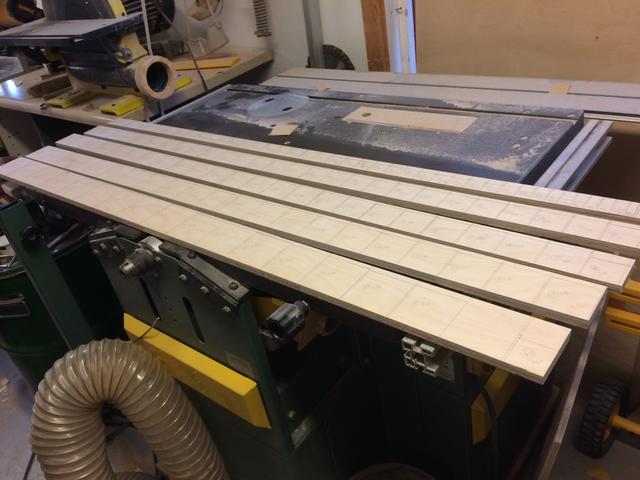 I sawed the strips into squares using my miter saw. 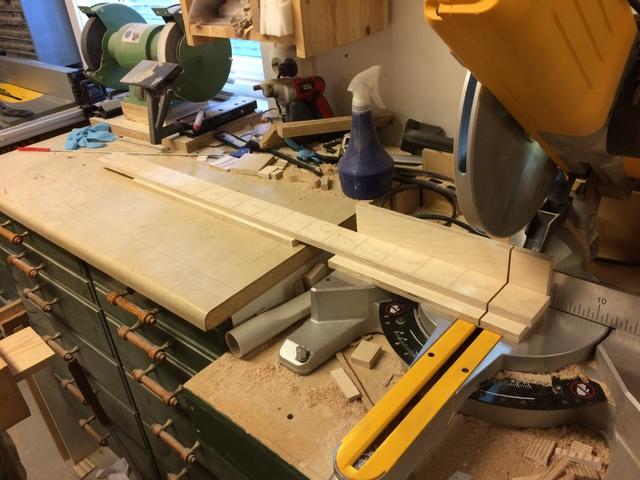 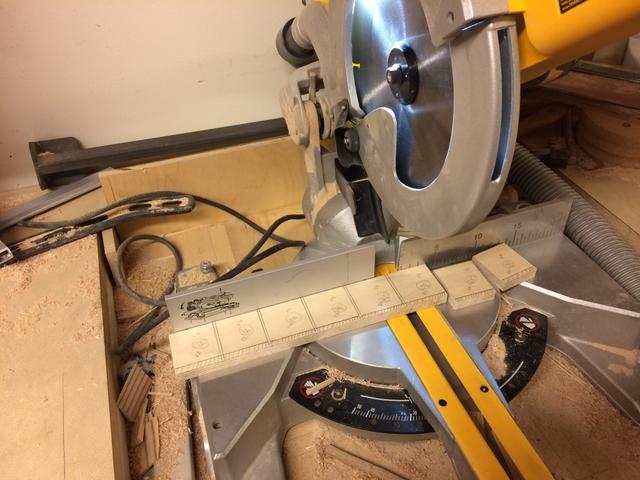 The individual pieces lined up then the pieces for 2 horns were boxed to prevent losing them. 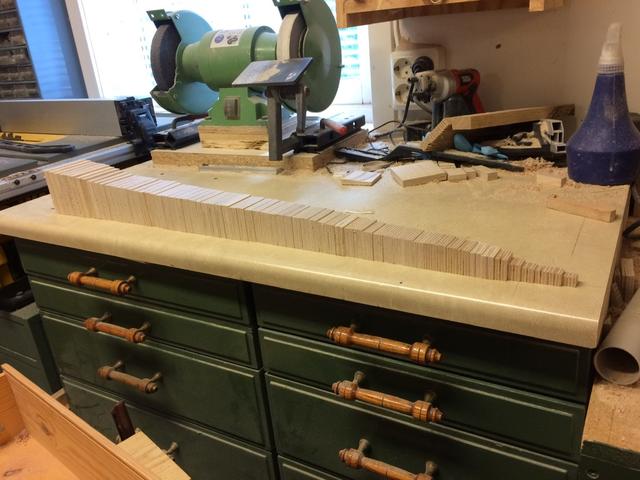 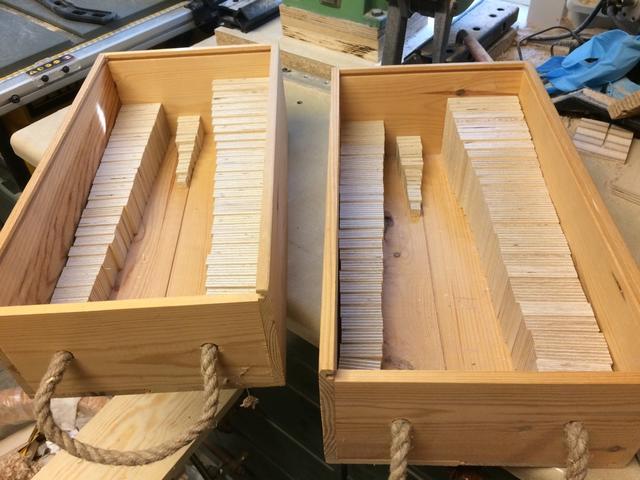 Problems encountered with the marking and cutting were numerous. Keeping in mind that what I have shown you here is after doing this 4 times incorrectly. Here is a list of what I did wrong on those failed operations.

I take full credit for not being focussed enough on marking out and cutting accuracy and being generally complacent. This was only the first cutting process and I resolved those problems after my first failure. However, there are are other operations that failed on subsequent attempts and it seemed that I was only able to solve one problem per iteration. So I hope you will stay with me and learn more silly stuff from the next blog in this series! The next steps will cover the marking and cutting of the wedges to create the curve of the horn as seen in the first photo.

Thanks for reading and please let me know if my explanations are not clear enough to be understandable.

I am intrigued by this. Can’t wait to see it finished.

This is the coolest and most challenging project I could imagine, your approach is most fascinating ,can’t wait to see more.

It’s challenging for us just to follow such a brilliant mind!

L/W can I repeat that to my wife?

Sure, Mike, if it will convince her!!