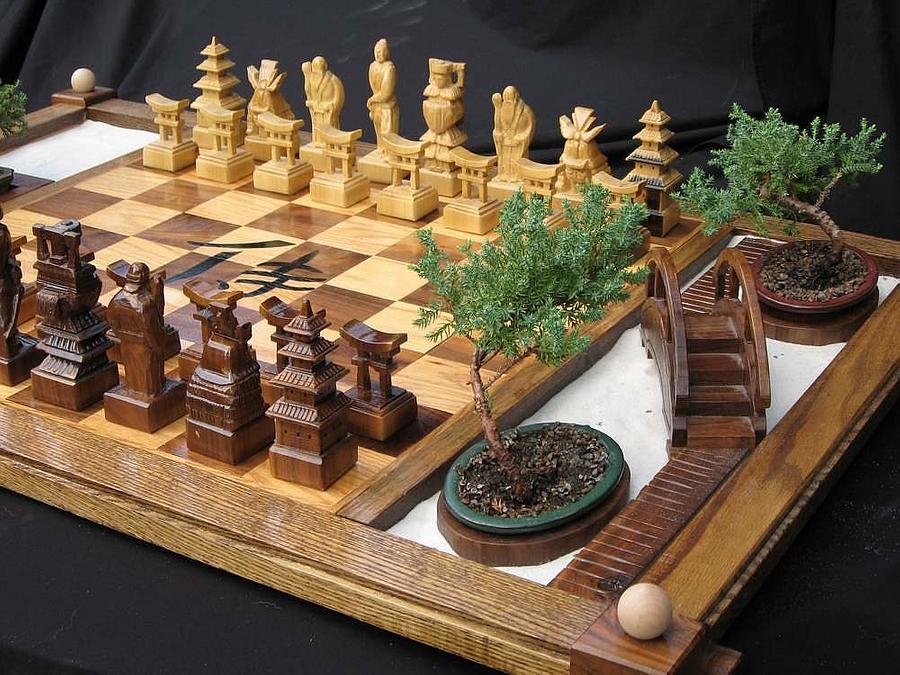 A friend of mine wanted me to make him a chess set. As per usual, I told him to pick a theme and I’d have it ready for his birthday. No holds barred, I was free to come up with whatever I wanted as long as it was a Samurai Themed set…The first pics are of his set. I recently had someone ask about a table version and the last pics are of the new table version.

The board version is solid Walnut and Maple…..pieces and board. Board measures about 42" wide by 30" across and those are ‘live’ bonsai…that first pic was 8 years ago and now the branches have been trained to extend over the board, but are high enough to not get it the way of play. There are two 7" by 24" sand gardens on either side of the playing surface, and the bridge and walking path serve as places to put the captured pieces. The Samurai kings are 9" tall and the ‘gate’ pawns acre about 3-3.5" tall. The table version measures 45" wide by 31 or 32" across, dont remember exactly because I was just making it up as I went along. Its so big I got terrible pics, but there’s just enough so you can see the traditional curved legs and curved sideboard pieces, and there’s a storage drawer for the pieces that has the carved gate on the handle. There is a soapstone inlay in the middle of the table version, and there are ‘working’ lights in the lanterns on the corners.

I have been carving chess sets for more than 17 years, and have over 100 different designs…this is one of my all-time favorites. I’ve made three altogether, one of which will be featured in a new museum in Izmir, Turkey slated to open later this year.

Great to be here and can’t wait to see everybody’s projects…woodworking rules!!!!

Stunning.. I’d love to play a game on this set.

That is truly amazing. Very beautiful design. I love the little bonsai gardens. What a nice touch.

Thanks you guys!!! The carving is all done with a couple hand detail chisels and a set of straight edge chisels (1/4", 1/2" anb 1") right off the rack at Lowe’s, but my hands are basically destroyed from carving hardwoods, I have gone to a dremel for sanding…

I look forward to seeing all of your work.

this is absolutely extraordinary!!
Beyond “wow”.

An absolute plaesure to look at and admire .
Your carving and design skills are extraordinary and this certainly belongs in a museum .

You’re definitely the king of chess board artisans,fantastic work.

I love this! It would be amazing to have this chess set!

-- Yes, I'm the weird girl who does pyrography...:) Don't forget to check out my Etsy shop at www.charleeabelles.etsy.com !