A few of you may know I did a website for my business back in January. For the most part, my inbox remains empty, but on occasion, I do get the odd enquiry.
Yes, there are the nutters “How much would it be for a bathroom cabinet?” etc.,. No size, no timber preference, never hear back from them. Then there are the ‘stringer alongers’ like the @sshole who wanted to rip off a load of high end contemporary German furniture (that was just a waste of time), but then there’s the odd gem as well. 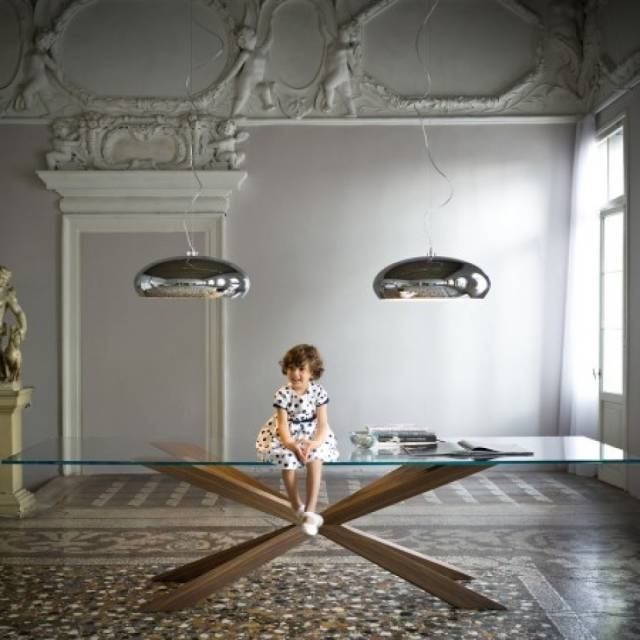 “Would I be interested in quoting on a one off table as above”.

Well, of course I love this kind of modern design, but tell me, would I have to be very brave or very stupid to take it on?

How would you go about making such a base?

I calculated the glass alone weighing in at a hefty 100kg

If I said to the guy I will take it on, but only after making a prototype to see if it’s doable, would that be an acceptable way to approach this? It would take a couple of scale models and a full size prototype in construction timbers to work out all the angles anyway, and see if it will bear the load, but then who bears the cost of that?

Your thoughts would be appreciated.

I think you would be taking the right approach making a prototype,perhaps a very dense wood like Ipe might work or dadoing out the inside and using a metal reinforcement frame. on the inside.It certainly would be a challenging project.

Rennners: Great Question, and thanks for offering it out for feedback.

(with a broad smile – ) Brave AND Stupid are not necessarily mutually exclusive; though everything becomes a sum of its parts…. My guess is that what makes it Brave is the somewhat Stupid part…

From the picture, it’s difficult to see the base, in 3D; that is, I can’t tell how the legs are joined, if there are right and left legs joined (cross-member, perhaps) or they intersect in the middle (like a large X)
Also, from the picture, the wood appears to be 8/4 (50mm) Walnut (pricey…), though, I’m not an expert in this. Also, there appears to be a double taper to each leg (narrowing in the center, tapering out to a wide ends. The glass is probably tempered – again, pricey – and relieved on the edges.

If the legs form a large X, then the very difficult question of the central mortises and tenons, if that’s how you would do it. My initial thought is to half-lap a small central section, then secure (Top-to-Bottom, through) with a 1" (+/-) walnut peg. My guess is that any type of nut & bolt arrangement, though expedient, would loosen – if you use a nut & bolt, rather than the peg, this would allow dis-assembly; and you may be able to achieve sufficient tightness with a washer, lock washer, and double-nut arrangement – though, you would have to conceal this joinery, for appearance sake. In either case, the central joint would need to be fairly robust to allow for a large Nut & Bolt or walnut peg. There is a possibility that a large half-lap, alone, would be sufficient; however, I’m skeptical that this would be strong enough; and rigid enough. .

Regarding process -
The overall quote should cover (be large enough) to support the prototype cost – unless you want to take this on as a learning experience.
The prototype – I would start-out with Pine, Douglas Fir, or an inexpensive hardwood – to test approaches to the central joinery – you can approximate the weight with plywood and cement blocks laid onto whatever prototype leg assembly you build.

These are my initial thoughts – I hope they’re helpful.
MJCD

To be able to build something like the table you pictured would be a dream, though I have no clue how to go about it. From a cost perspective, everything I’ve ever researched and read about the subject of custom furniture and design leads me to believe the cost of the prototypes should be passed to the customer. Anyone serious about requesting a one off custom design such as this should be prepared for the price tag that comes with it. I hope you are able to land this, and at a worthwhile price. I’d love to see the finished product and hear about the build process! Good luck!

I don’t care much for this particular design . Visually , it looks unstable . It looks structurally sound as a rock , and probably is .
That may be the designers’ way of showing the cleverness of his joinery ,drawing
one’s eye to the ‘Gordian Knot ’ of the tapers towards the joint .
You could shop this around to some timber framers ( don’t know
what they are called in Ireland : ) ).. , and see how
much they would charge you to build it , as a reference for your quote .

Lazy factor aside, I’d have no qualms about taking on a project like this. With the right joints, the down pressure on them would only increase the safety factor [of the assembly supporting the glass.

I would take some doodling, but many are the approaches, I see, possible. All would be in the mortise and tenon category, but they could vary from wedges like dove tails to just straight cuts. Of course, all would only go into each leg only as much as needed to assure a joint and to allow all for legs to get in on the game.

In the end, it boils down to nothing more than some nasty angle work, but some short, vertical 2×4′s (cut just long enough to support the glass) to temporarily hold things in position would give you the feel of a starting place.

I am thinking that the only way to make that strong enough is to use 8 pieces of wood cut the same and then joined to a hidden metal contraption in the middle with 8 flanges on it. All glued with the best epoxy money can buy. The angles will be a bitch, but when figured out all should be the same.
Good luck Renners.

I used to work in the furniture biz. That thing has a steel frame, cleverly hidden. That’s a lot of glass to have suddenly hitting the floor.

I agree it, likely, has a steel structure inside.

Do you think the girl’s feet are strategically positioned to hide the joint ?

I’ll make it unanimous – some metal fixture is necessary. I didn’t want to be the one to say this couldn’t be done with some clever, really outrageous wood joint that the truly gifted members of the forum could recommend.

I think the legs are made of steel, welded together, then either faux painted or veneered.