So I’ve been really ramping up my game here and one thing that has bothered me is the final protective coat of epoxy. I was not getting good results with 5 minute epoxy so I switched to envirotex, which has a much longer working time, but it sags so it has to be turned once in a while. To do that I built a spinner. 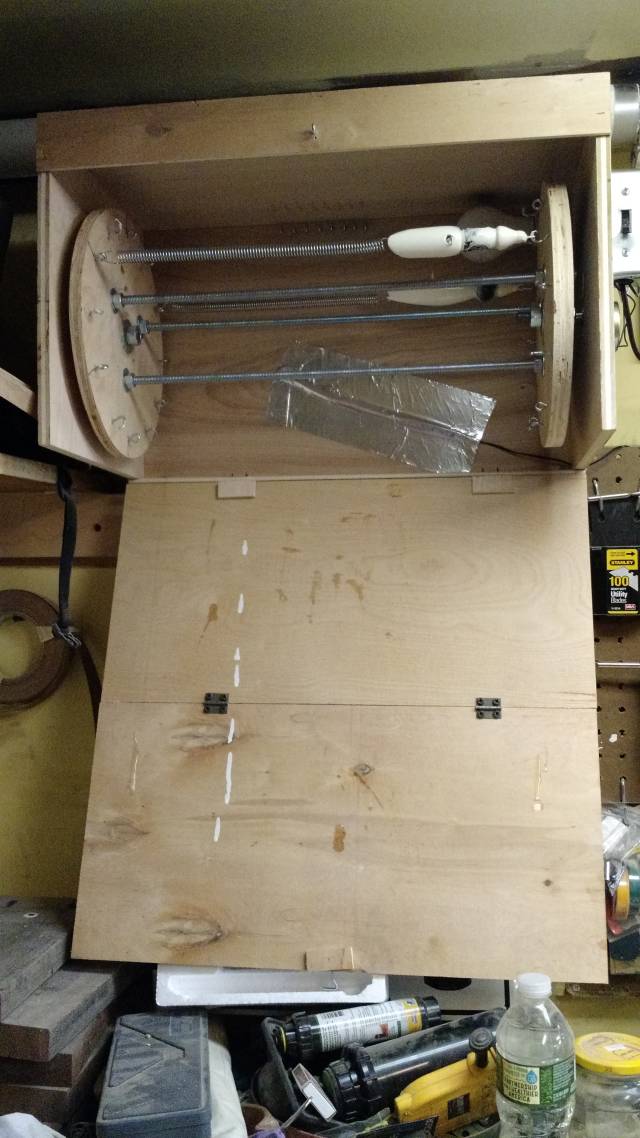 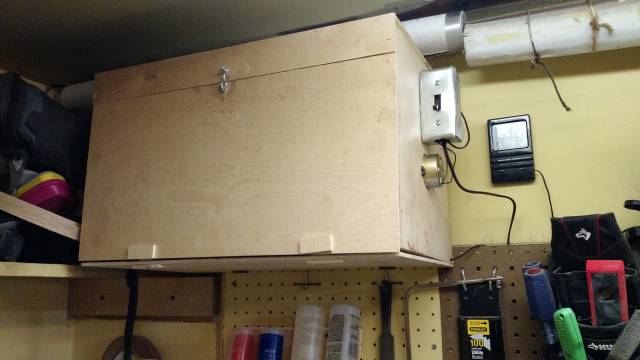 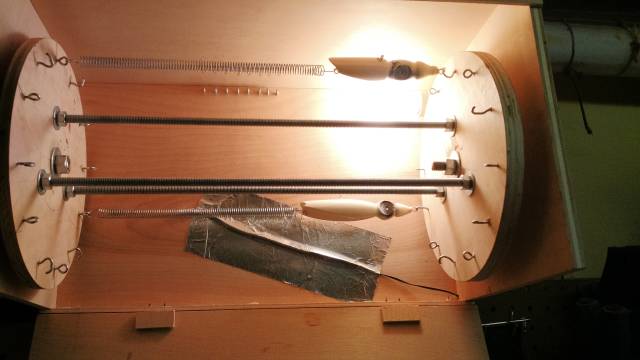 Space is at a premium in my tiny shop, so this had to go on the wall and there was hardly a space to start with, but I found a little corner above my bench. The box is about 12″ × 12″ × 20″ and hung on a French cleat so I can take it down easily if I want. The spinner consists of 2 circles held together with some 3/8" threaded rod I picked up from work a while back. The axle is 1/2" threaded rod. The reason it’s 1/2" (which I had to pay for) instead of the free 3/8" I had on hand is because I drilled and tapped an M4 screw in the end to receive the motor spindle. I wasn’t sure if I could fit the screw into 3/8, but after I did it in the 1/2", I’m pretty sure it would have worked in 3/8". Live and learn.

The motor is a 1 RPM 110V AC motor I picked up from Amazon for $12. I was looking for a thrown out microwave to take the turntable motor but I didn’t want to wait any longer. The speed is pretty good. It’s wired to a light switch on a lamp cord, which also controls a light inside the box to make a little heat. My shop is cold in the winter, usually around 50°. The light makes a huge difference. I have the sensor for an outdoor thermometer taped inside and so far I haven’t seen the temperature above 85°. A little warmer even would be nice.

Because I mounted it near the ceiling, I made a bifold door that opens up the front and bottom. Easy access and the for keeps dust out. It’s far from air tight. The door latch is a small hook/eye.

I use springs to hold the lures between eye hooks screwed to the plywood circles. Those dang springs were the most expensive part of the whole project. Lowe’s really dings you for odds and ends that would cost pennies in bulk. Altogether I probably spent about $40, with some of that being redundant after changing some aspects the design a couple of times.

There is room for 12 lures. I have couple of different sized springs that will work for different length lures. I’ve only used it a couple of times so far but other than working out the design kinks it hasn’t given me any trouble. The 3 rods holding the disks together really make it sturdy. That was the 3rd axle design. The first was 1/2" poplar dowel that bowed with the tiniest amount of tension. The second was a piece of 1/2" rebar that fixed the bowing issue but didn’t hold the disks apart well enough, despite the fact they were glued. The threaded rod is perfect because it holds them together and apart. It’s super stiff. There’s a lot of tension with 12 springs tugging at those circles.

I’m done messing with this thing for now, but at some point I’m going to make the spinner removable from the box so I can bring it inside to a warm room to let the epoxy cure fully. I have an idea for that but right now I have other things to focus on, like finishing enough plugs to get me through the season. I’m almost there but there are always new ideas sucking up my time. :-)