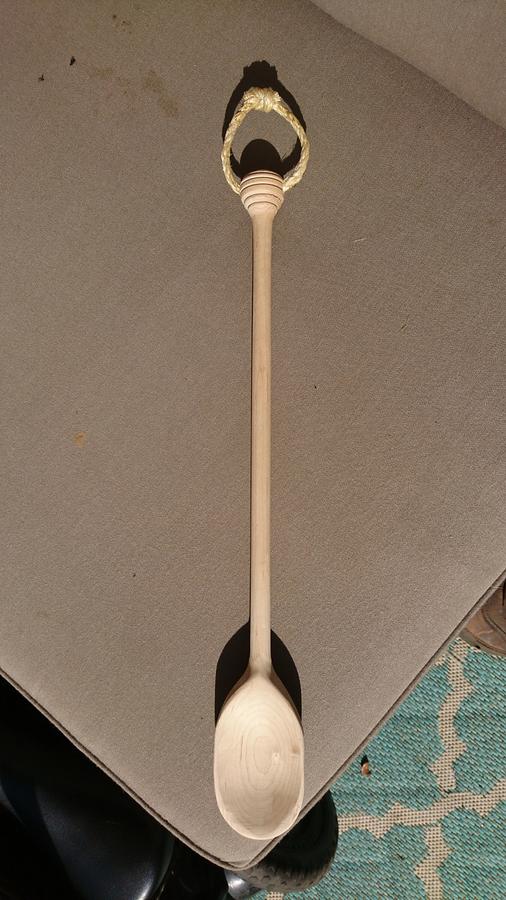 Maple spoon for outdoor cooking. I burned my other spoon so I made a new one. This one won’t get burned because it has a loop to hang the spoon on the hook for the pot chain. The other one was left in the pot or laid on the rim to roast away. Also my wife didn’t like the large ladle. She wanted a more traditional wooden cooking spoon with a shallow bowl. The picture of the cooking setup has the old spoon hanging – last minute idea using a shoestring (blech…).

I roughed out the shape on the bandsaw and turned the handle on the lathe. Then I used my Shinto saw to shape the back of the spoon but the inside of the bowl had me stumped. This is very hard maple. I guess you could call it rock maple. I don’t have any carving tools so I tried using a small chisel and ROS with 40 grit paper. Fail x2. Then I grabbed a gouge from the lathe, not really knowing what to do with it, but at least it has a rounded shape. Then I started scraping and bingo (no, that didn’t work, but I figured out how to do it). My dear friend Jack from this very site sent me a few card scrapers a while back. One is shaped like a French curve. That did the trick. After I smoothed out all my bludgeoning from previous attempts, I kept going until I got to a depth I was happy with.

After that, just final sanding, then the rope loop and voila. Now I can’t wait to show my wife. We cook outdoors almost weekly. My wife is Hungarian and this is sort of a party thing to do. Sometimes with guests and sometimes just us. This spoon will get a lot of use.

One last thing – shaping the shaft was no small task. It’s thin so it tended to vibrate and bounce around on the lathe when I put the chisel to it. I had to go really slow since I was afraid it would break in half. And then after rounding it, I used a skew to bring it to it’s final, uniform diameter. Still had the same problem with the dancing around so I put my hand on it as a guide while smoothing it with the skew. That helped a lot.

One other thing – it’s unfinished and it will stay that way just like any old regular wooden spoon. It will turn red from paprika.

Love it. I like the kettle cooking idea. I will have to give it a try. I have the same fire pit.

Try this (in this order):

Bacon (diced) until the grease is fully melted (if possible, get a total-fat cut)
Onion until slightly caramelized
Salt, pepper, coriander seeds
Paprika (several tablespoons) until it’s soaked in (no more than 2 minutes)
Beef or pork cubes until browned
Water to make it soupy
Potato cubes – make sure they’re covered with water
Enjoy

Fine work Brian, with cool days right around the corner that will be it to good use. Thank you for the recipe.

Enjoy it. The bacon cooking drives the neighbor’s crazy. Be ready for unexpected guests. ;-)

I like it,it makes sense that it has a nice long handle.

love it … and the recipe (sounds like a Hungarian dish)