DIY thickness sander for lathe or ShopSmith #4: Tuning up

So I went out to the shop this morning, all set to get the sander all tuned up and ready for the velcro kit which should arrive today. Unfortunately I didn’t get to do much tuning up because everything was OK.
First I stuck a straight edge on the cylinder to see how much I needed to sand off to straighten it. It was dead straight so I just ran some sandpaper on it by hand to de-gloss it for the velcro adhesive.

Then I started to check the drum / bed parallel situation and the effectiveness of the elevator setup. In this photo I have raised the bed with the right elevator only (leaving the left one loose) until it just contacted the right hand plywood piece. When I checked the left side it took one veneer (about 1/32") to get friction. Not bad.
When I did the opposite, I had the same result, so the drum is not off parallel.
(The front skirt has been removed for access) 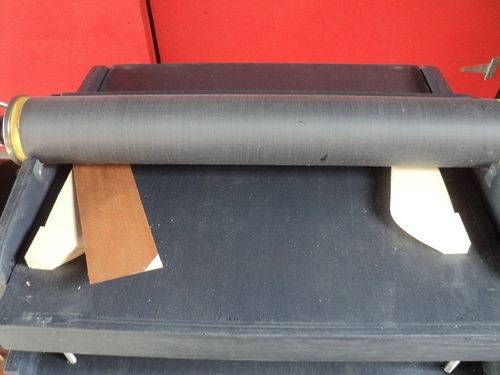 Next I left both elevators loose and supported the center only. Here I have slid the left end of a piece of plywood in until it just slides under the drum with a tiny bit of friction. 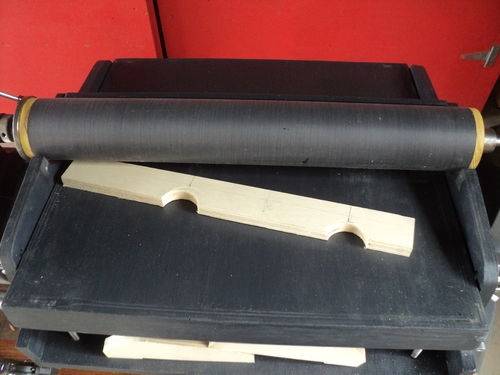 When I rotated the other end in it contacted at exactly parallel. I guess this means that I will be adding a center elevator and will likely just use the left and right ones for very fine tuning when and if necessary. Too much thinking has obviously made this harder than it had to be. 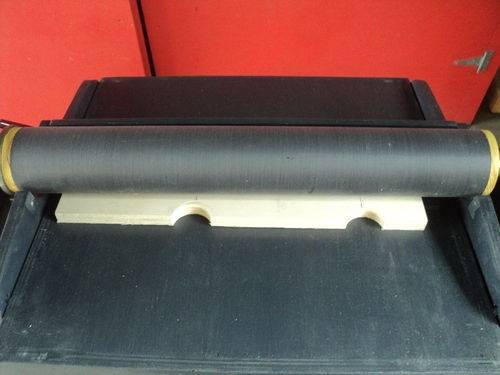 Imagine my disappointment as I had devised a diabolically clever way to align the drum with the bed. I will include it here anyway as everyone may not be as lucky as I was. Had I found that one side was a veneer loose as in this photo…

I would have added exactly that veneer (or veneers) between the sander and the way tubes on that side. This is an adjustment you don’t usually find on a drum sander because on most drum sanders the drum is directly attached to the bed assembly. Here they are independent so it would be a permanent and effective fix. 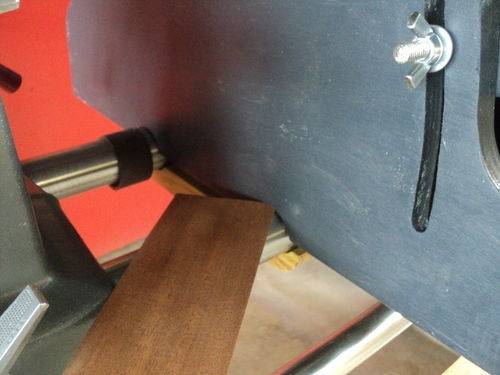 View all parts of DIY thickness sander for lathe or ShopSmith »