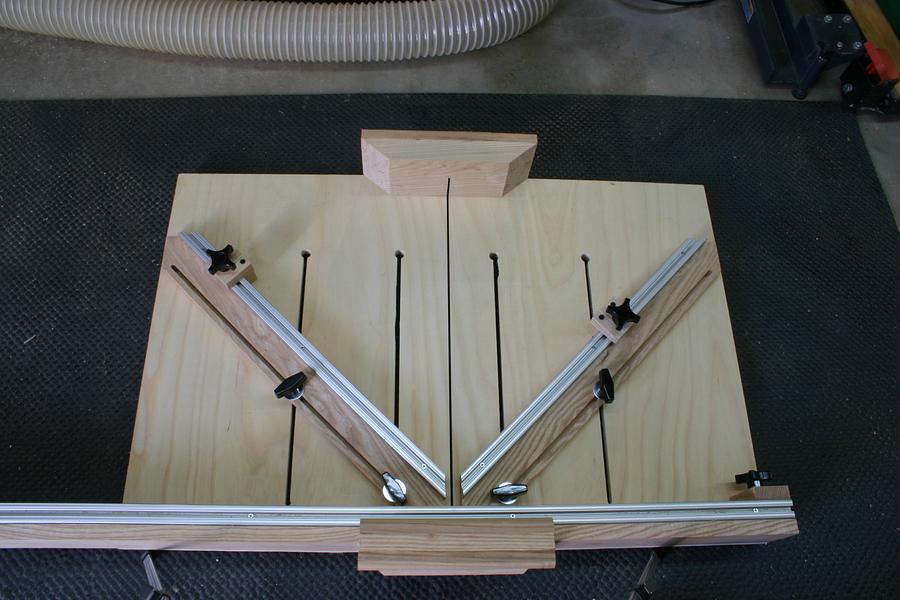 This has been an interesting project for me to research as well as to build, in that I sure had my challenges with the router. ;-) I not only read/watched everything that Eagle Lake Woodworking has on this table saw sled design and build, I also looked elsewhere for tips and techniques to make my execution/build of this project as accurate as possible. Steve Marin has a neat YouTube Video on accurately aligning and installing runners and fences that I found useful as well. Armed with this information I was off to the shop and making dust!

Some of the modifications that I made include:

++ Used 3/4in plywood for base— I want more durability/longevity and besides I can still cut 2 1/4in even with this thick of base ;-)

++ A 56in long main fence— I wanted to be able to cut multiple pieces as long as 36in in length, so I made the fence on the left stick out 38in to include enough for a stop block as well. Do note the gap in the vertical T-Track on the main fence so that the TS blade doesn’t have to cut through the T-Track.

++ I moved the “adjustable” fence slots closer together than the original plans called for as well— The plans called for the slots to be 7 1/2in apart, however, I found that only got me down to a max/min angle of ~60/30 degrees. I made the slots just 6in apart and when finished I can actually get a max/min angle 70/20 degrees, so that 22 1/2 degree angle is a doable on this sled.

++ I surface mounted the T-Track on the “adjustable” fences instead of routing them flush here— I did this in order to NOT have to depend on just 1/4in of material to hold down the T-Track. This works fine and does NOT try to pull the T-Track away from what it is mounted to.

++ I added the second “main fence” T-track as recommended on Eagle Lake WW Improvements— I did, however, move the vertical facing T-Track down to mid-board as in the Steve Marin video. I think that works better in that position.

++ Added a second “round-over” piece to the push/pull handle— I had this left over from making a longer piece for my handle needs and decided to use the leftovers as well. In the second image you can see a lower round-over piece on the handle that I placed there to keep my thumb from migrating any closer/lower toward the blade than it needed to be. It seems to serve as a tactile reminder of where to keep my thumb when pushing/pulling the sled (a safety feature).

(below) Once base board is squared and clamped in place, rslowly raise the running blade up through the base. This sets/locks the position in place. 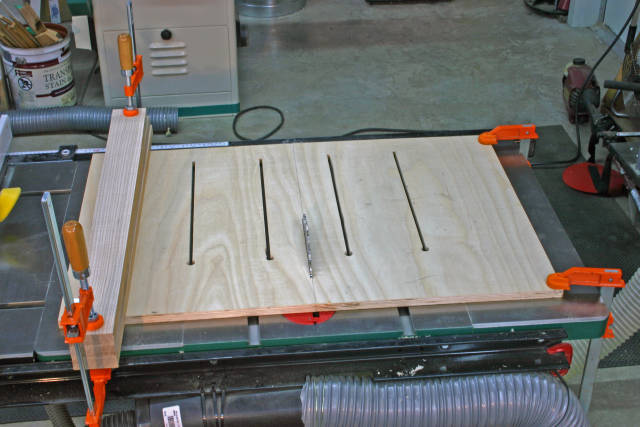 (below) I glued the miter runners in place, using the precut raised blade slot as a reference to keep things straight. 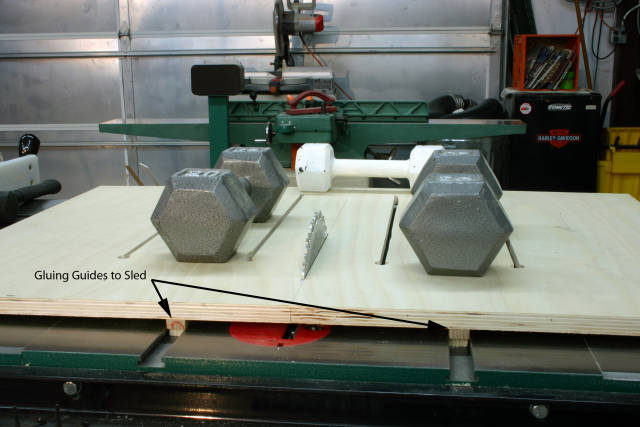 (next two below) Making the adjustable fences for making angled cuts. 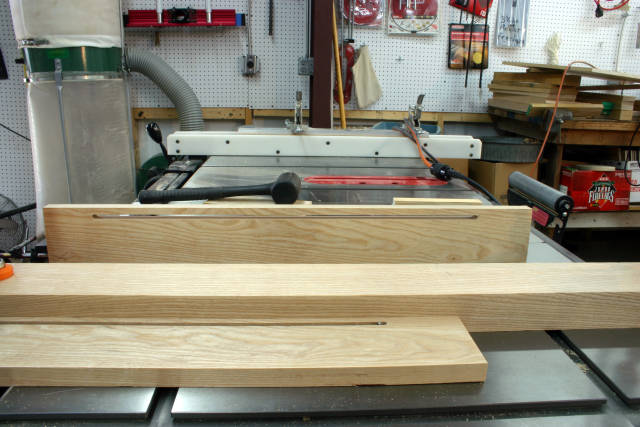 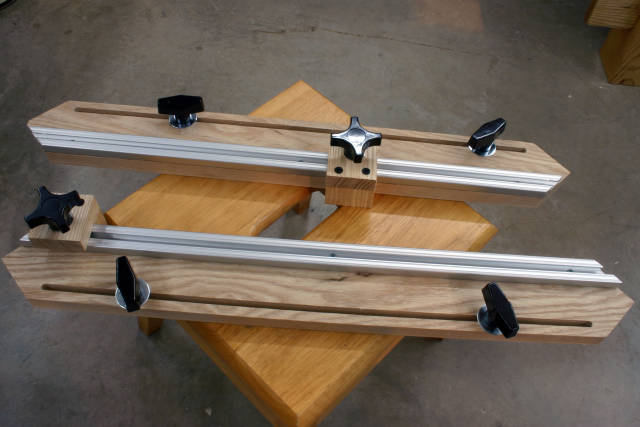 (last two below) My main fence, showing T-track and handle in place. I used a full 2in wide piece of Ash on this, as well as having the two T-tracks at right angles. This should keep everything very straight for a long time. These fences are screwed in place so that I can remove them and replace the plywood base as needed in the future. Thus far, 3yr down the road, that has not been needed. 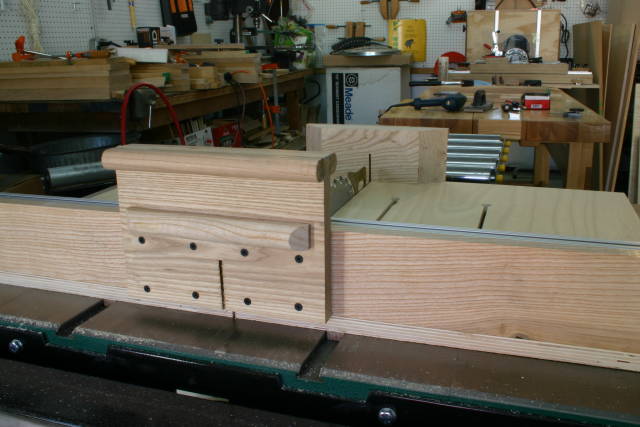 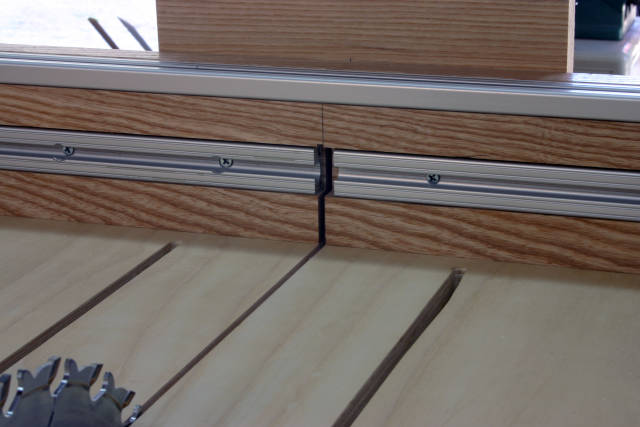 I don’t know a lot about crosscut sleds but I do know beauty when I see it!!!! This is beautiful.

Great sled Mike.
Good call on bringing the slot together for “wider” angles.
The longer fence is definitely a plus.

Love the grain on the front fence.

Good looking and well designed sled with a lot of thought going into it .
Thanks for the great write up very informative and good info.
Only thing I wish you would add is a blade guard where the blade exits to keep those hands safe .

All you crosscut sled designers/builders are really making me want one. Thanks for some more great information.

Thanks for the kudos folks!

FWIW, I added that extra lower round-over piece on the push handle to essentially act like, or in place of, a blade guard per say . I know that as long as my thumb rides on/touching that extra round-over while using/gripping the sled, that it is in a safe location away from the blade. That extra piece physically reminds me of this and I find that reassuring.

I’m sorry Monty. YOU would have made a great friend, HOWEVER, I hope that you realize that you will NEVER complete that list on your wife’s “to-do list”.

And you had such great potential and ideas and such, and … ;-)

Nice sled Mike, great tool to have in the shop. The extra round over, good reminder to keep your thumb attached.

I really like this design. I am going to try to make one this fall, yours seems to be exactly what I was thinking of making. Thanks Mike.