Four In One Cowboy Carving

Four In One Cowboy Carving

Getting Started
This my first ever figure carving. My inspiration to try this out was from watching a tutorial video here by Gene Messer who gets beginners started. My prior attempts at carving have been relief carving and none of them have been any good, so I thought figure carving would be even more difficult, but Gene made it look doable and so I gave it a try. I realize this first one isn’t very good, but it is good enough to make me think that I can get a lot better. I never felt that way with relief carving. Gene teaches a technique called ‘flat plane carving’ which is mostly carving with a knife and getting a maximum character effect with minimal details. I put in more detail in my carving than is typical for flat plane carving just because I like the details.

I’m not planning to do much cowboy carving, but I did this one because I was able to take advantage of Gene’s profile drawing to make my blank to get a basic size and posture plus the hat outline. The carving itself is my own design, if you can call it that (shown below) 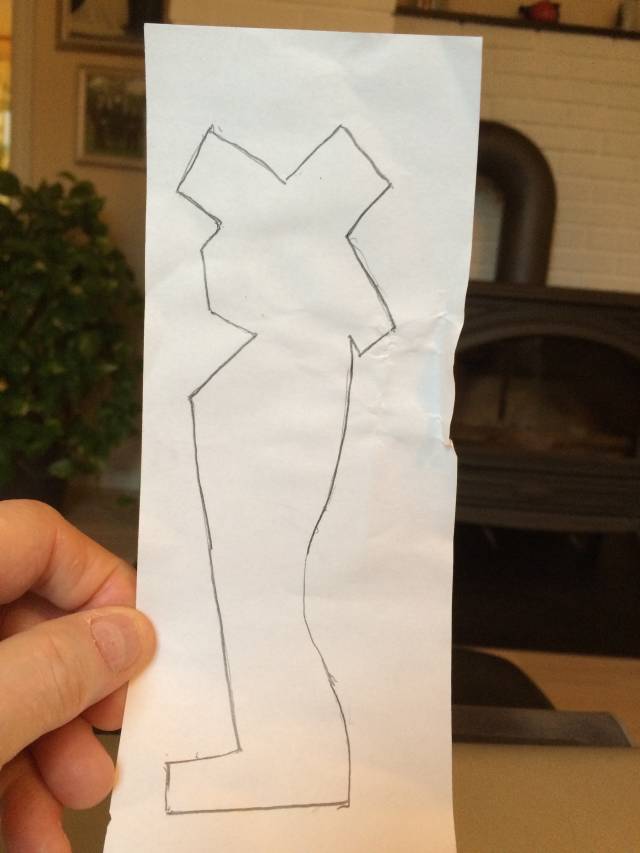 More Inspiration
After finishing this project I started searching the net for other figure carvers just to see what they were up to. I found a great website and videos from ‘Out West Woodcarving Videos here. These videos are made by a fantastic woodcarver Lynn O. Doughty. You’ve most likely heard of him if you are already a carver. His videos are very well done. I feel that I have learned a lot from watching them and I hope to apply some of that new found knowledge to my next carving project.

*What’s with the ‘Four In One’ title?
I’m not sure, but I may have set a record with this project. It has actually been completed four times! Each time I finished it I was unhappy with the result and so made changes, some big and some small. Here are photos of the same carving upon completion all four times and in order. 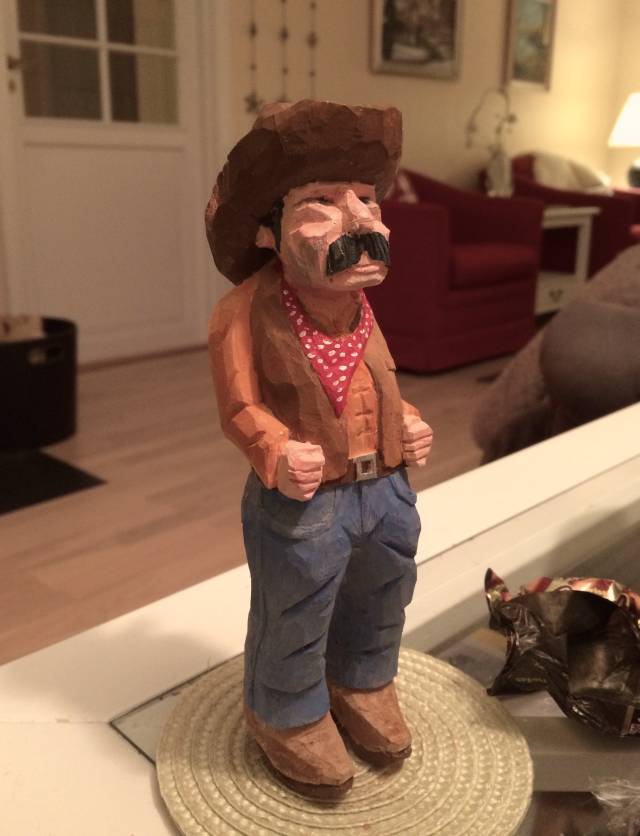 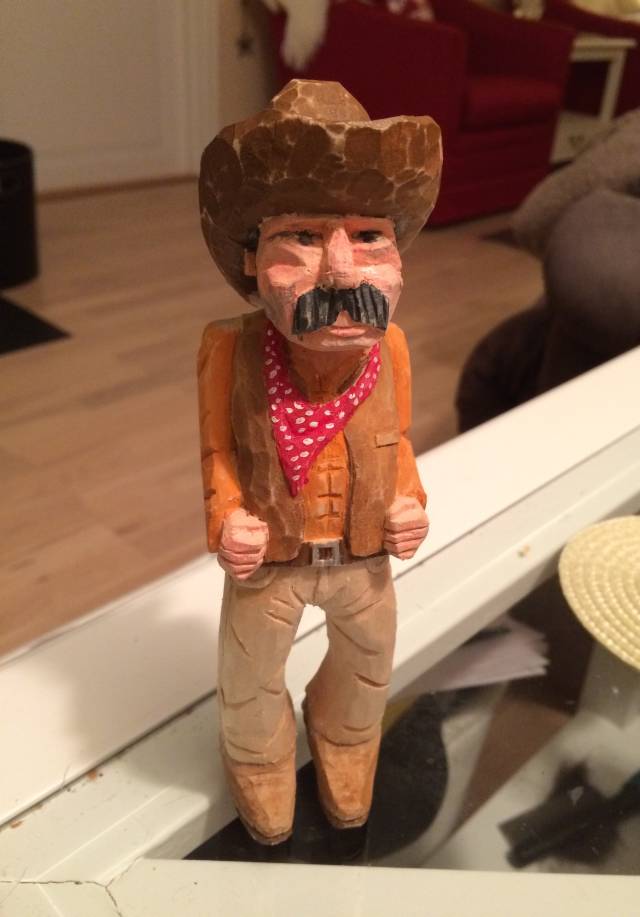 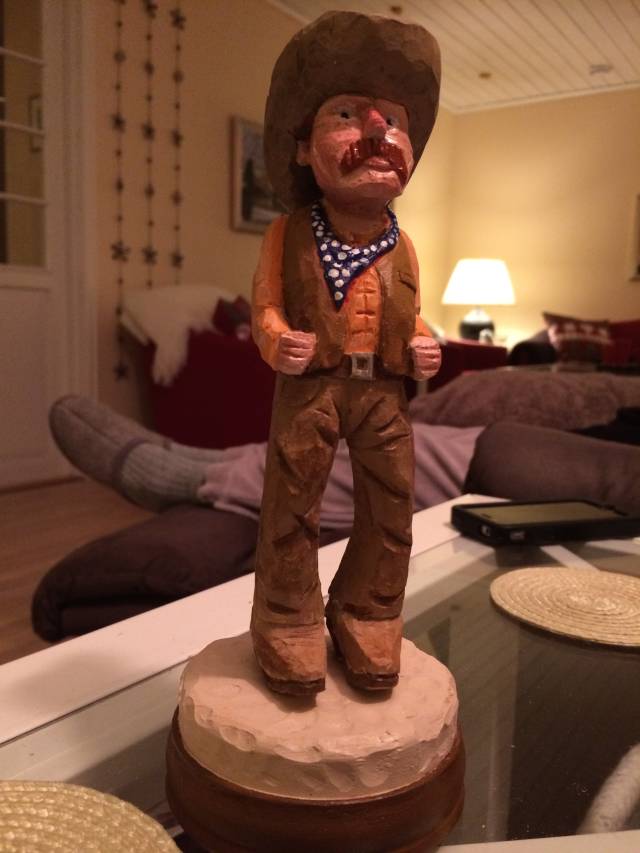 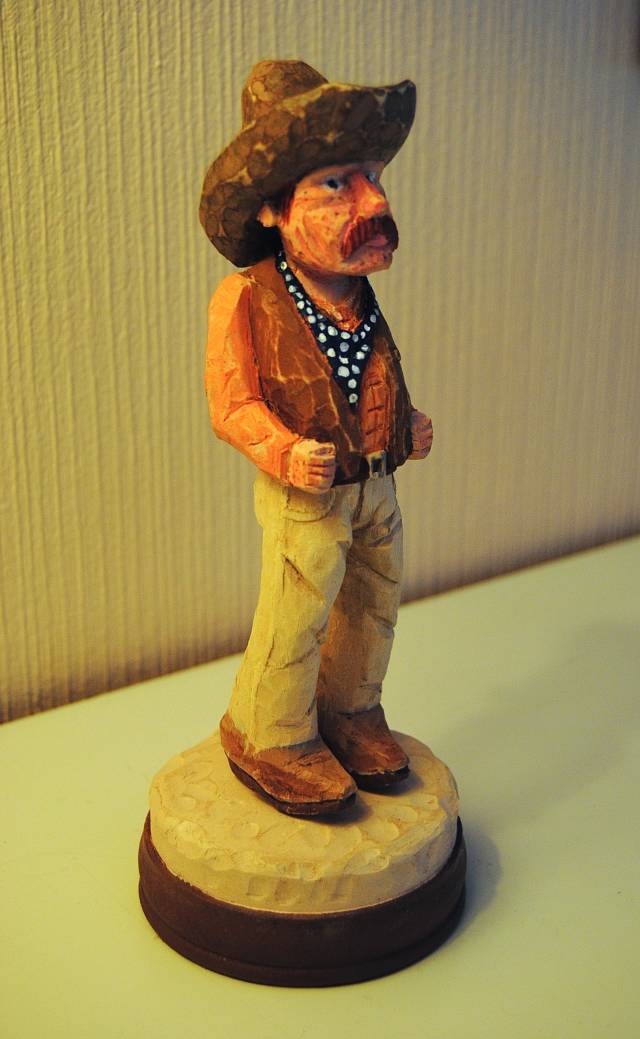 So go ahead and laugh, it’s kind of like one of those films where they make more than one ending so they can change it to suit the audience, except I did it to suit myself in this case. You don’t have to say it’s good, but I’ll appreciate it if you let me know which one you think is best.

My own take on this project
I sure had a lot of fun with this, creating my own little person. Of course its obvious that ‘Red’ has a few shortcomings. That is, too short arms, a missing left ear, no eyebrows, funny hands and he is standing with his toes pointed straight forward. We can only blame his creator for these defects, and yes, he looks a little angry about it. I do hope the next one will be happier so I can feel the love, but if you are thinking about carving figure like this, all you need is what I used, a chip carving knife for everything except that I finished the inside hat brim with a gouge, but I could have finished even that with the knife, but it would have taken a little longer. There are better knife shapes to do this with, but I just used what I had.

Future Carving Plans
I’m definitely planning to give figure carving a permanent place in my woodworking repertoire. It was really fun. I hope you will give it try too. Thanks for looking in.

That little guy is on the level!
Where did you get my picture from?:)

Thanks Abbas. You are much better looking than this guy. Luckily I didn’t have to steal any body parts to put him together with.

I hope you’re well proud of that. You took a step and he’s amazing. Well done!

I think I know that guy from school in 1966. Very very nice. What kind of wood did you use? The color tones and texture of the paint is amazing. Great job. I have two huge pieces of basswood so I might try my hand. Thank you for the inspiration.

Thanks Wolf and Jack. The wood is Linden which is the European version of Basswood, and within the same species. It is my understanding that Linden is a bit harder. It is very nice to carve with though.

Very nice. You seem to have enjoyed doing it. Will you be trying more carvings? This guy looks fantastic he even has an expression. That’s hard to do. Do you have a variety of knives to carve with? I have about 10 that are my go to. I have never used linden before, sticking with mostly pine and cedar logs to start with.

You certainly are multi-talented, but I can’t pick a favorite!

Thanks Thorreain and L/W. I have a few good quality carving tools, but figure carving can be done mostly with just a knife. I used just a chip carving knife for this one plus a gouge for the top of the hat brim. One well known figure carver does about 90% of his carving with a utility knife, but he also uses a small thin blade knife, a ‘V’ tool and a small gouge.

As so many figure carvers claim, I found it very relaxing to do figure carving, partly, I think, because you hold the work piece in your hand which eliminates a lot of clamping and unclamping, and also because you don’t need to be constantly changing tools as in relief carving. Another aspect is that there is great latitude for improving your design or making changes underway, whereas relief carving is a far more disciplined experience.