When I had this finished project I asked my youngest grandson (15) if he knew who this carving represents. To my surprise He answered Tom Sawyer right away. Not bad for a Norwegian. It just goes to show how widespread Mark Twain’s stories have spread. A world class author. I had a role in a Tom Sawyer play while in grade school which we performed for the parents and students. It was a lot of fun and it is one of my fonder memories.

My real reason for doing Tom was not however due to fond memories . I wanted to try carving a figure with hands and feet in the hope of learning a little more about anatomy, and I immediately thought of Tom as the perfect subject. Secondly I wanted him to be doing something so as not to look too static, but not doing too much as my skills are currently at the bottom of the ladder, so I figured the fence painting chapter would be perfect. Even worse than Tom was the rather badly carved dog. I realized at the last minute that there was too much empty space in the scene, so I did him rather quickly and rather badly. At least I’m rather consistent! The dog is not attached to the scene and I plan to do another and better one later. I will probably have to keep it in my shop as I don’t think anyone would want it, but it will be useful to measure my future work against to see if I improve.

This was fun to carve, but at a little over 12” it was a lot more work than I had planned on. I made it bigger because i also wanted it to be big enough to allow for some facial details, especially the eyes. Of course I couldn’t put a lot of character into the face as Tom is very young and therefore has a smooth face. I’m not thrilled with it, but it is marginally better than my last face, so I just have to practice more. I’ve been reading up on figure carving, watching some online videos and I bought some caricature carving books to study. I also want to thank ’Druid’ aka John for emailing me several carving books which he had available. They were a big help, but of course theory is one thing and practice is another, so I realize it will be some time before I do anything worthwhile. Anyway I will now have something to do while sitting on the terrace in the spring and summer soaking up the sun!

Thanks for reading and please don’t hesitate to criticize as it can only help me do better next time!

Madts commented over 6 years ago

Well done sir. I see nothing wrong. 100 times better that I could do.

Lightweightladylefty commented over 6 years ago

My husband immediately recognized Tom. You’re too hard on yourself; we think you did a fabulous job! 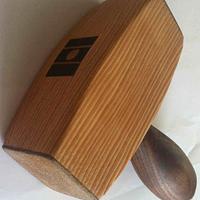 Dutchy commented over 6 years ago

When is the gate ready Mike? :)

Thanks much Madts, Abbas, L/W and Jan. Another fun project. I’ve always wanted to carve, but I made the mistake of trying relief carving which is really much more difficult, to me at least. One thing that has always ‘worried’ me about carving is the need to cut with the grain. Grain direction related to your tool edge is not always so obvious, but I have found that you can easily feel when a cut is going against the grain and then you just have to reverse the direction, or in some cases just roll your chisel to cut with the opposite edge of the tool. A no brainer approach that makes life carving more enjoyable.

Jeff Vandenberg commented over 6 years ago

I love it. I think you did a awesome job on it. I can’t carve one bit. I’d say your skills are well above what you stated.

Thanks Jeff. Everything is relative and there are so many really talented woodcarvers around that I have a pretty good idea where my skills are at this point. But I’m not worried about that anyway as I am probably enjoying the work as much as any of the experts despite the results, and for me that is what counts the most.

I am very glad that there was such a positive reaction to this project because I think so many of us have been inspired by the Mark Twain’s Tom Sawyer stories where we learned that if we had some of Tom’s spunk we could make our own luck and be in charge of our own destinies. 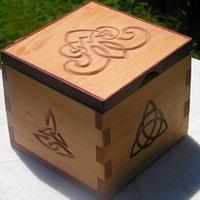 Celticscroller commented over 6 years ago

I think you portrayed Tom Sawyer very well! You did a great carving! Love it.

Wow Mike this a so charming,great job.