My Woodcarving Adventures #1: Getting started

My purpose for this blog is to encourage anyone who has thought about taking up woodcarving to give it a try. I outline below my beginnings and progress so far. I am a complete novice, so I can’t teach you how to carve, but I have some ideas how you might learn. I have posted a couple of projects here on other carving work here on WWW, but the photos below show what I have been up to lately. If you like using hand planes, spokeshaves and knives you might want to consider woodcarving. It is very therapeutic and hard to stop once you start.

If you have tried carving and found it frustrating it might be due to cutting against the grain. The online school I mentioned below has a free beginning project to literally get you headed in the right direction on that.

Woodcarving is a skill that I have always wanted to learn. I’ve tried relief carving with no instruction on my own a couple of times with very poor and discouraging results. I did have better luck with figure carving which I just started doing recently after seeing a youtube cowboy carving video by Gene Messer. He made it look doable and I was able to carve my own original figure using his basic outline figure. Since then, I have bought some figure carving books and learned a little. my favorite book is by Pete LeClair titled ‘Carving Caricature heads and faces. I have only carved a head based on his instructions so far. I also bought a book by Harley Refsal ’Carving Little People’. That was to please my wife more than myself as she likes those small figures carved in what is known as the ‘flat plane style’. I prefer the more detailed work that Pete LeClair does. Here is a picture of my first effort. Not very good in my opinion, but it’s a start. 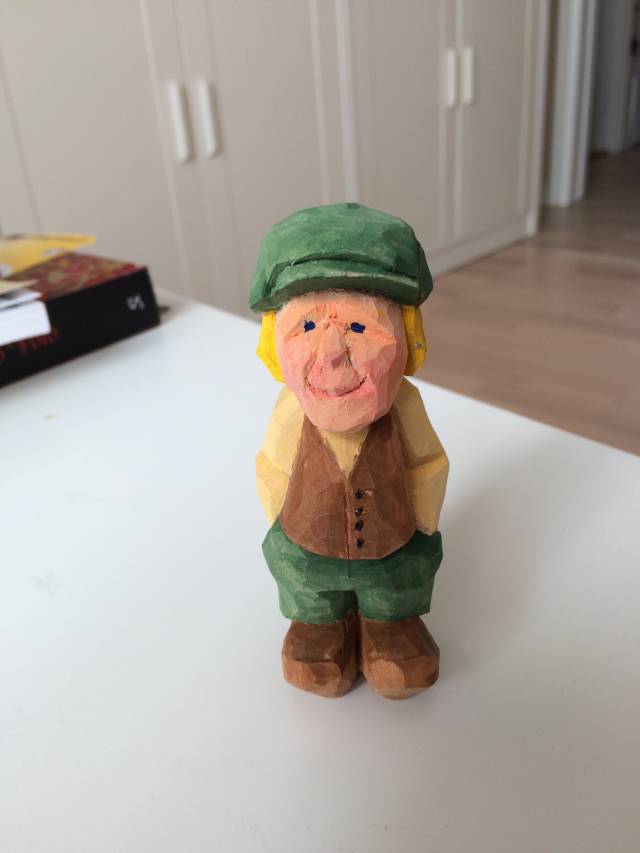 At first I was just using my Pfeil chip carving knife, but soon decided I needed another knife which was more suited to removing a lot of wood to speed things up. I bought a sløyd knife for that work from a Swedish chain store and while I was there I saw a chinese carving set with standard size gouges and a skew touted as being made of high quality steel and they had handles identical to Pfeil which I like. I didn’t really need them as those type chisels are made for relief carving and sculpturing, but I couldn’t resist the low price, even though I had no intention of taking up relief carving again. Little did I know that another youtube video by another carver would get me to once again try my hand at relief carving.
Here is a link to Mary May’s carving
school. I signed up for some free lessons from her online school to see if I could get better results than I had in the past. I watched the lesson on carving a camellia and gave it a try. As you can see below, the results aren’t impressive, but good enough to encourage me to sign up for a one year membership. I pretty much followed her instructions 100% on this one. 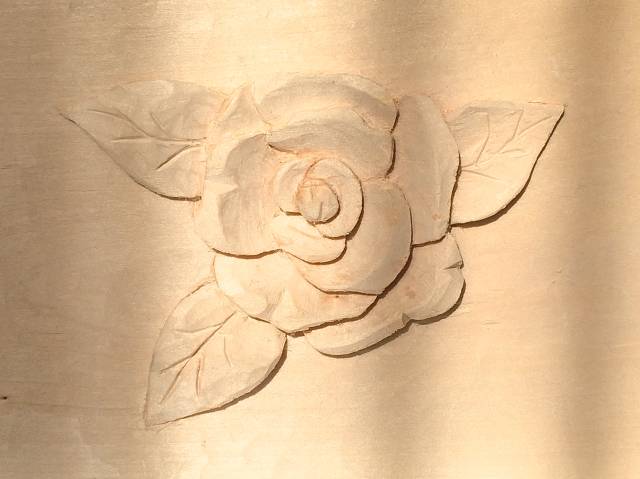 My next little practice project was the Grapevine pattern. It was a lot more challenging. I first did the one in the photo below after watching Mary May do it in the lesson video. I stuck to her instructions as well as my memory served me, but I formed the leaf differently than she did while still trying to use her general techniques. Again, not a work of art, but it could have been worse. I decided to give this exercise a 2nd try sticking more exactly to her instructions. The lessons are downloadable, so I was able to take my computer out to the shop and view the video while working on this one. I failed miserably and I won’t even show the result. So now I know that for me it’s best to just learn as much as I can from the video and then do my own thing afterward as to forming the design. 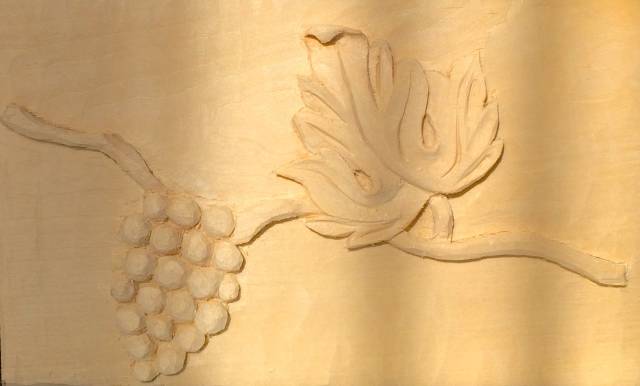 I would like to say that Mary May is a great teacher. Her instructions are very clear and she doesn’t leave anything out. If you are interested in learning carving, especially relief carving I would urge to have a look at her site. There’s a lot to learn there.

*If you were interested enough to read this whole blog, then you are probably a good candidate for taking up woodcarving. Thanks for reading and I wish all of you a Happy Easter!
*

View all parts of My Woodcarving Adventures »

Mike, thanks for all of the great information & pictures of your work.
I tried wood carving many years ago, but didn’t pursue it.
This encourages me to try it again !!

I love to make things for family members. My own rules for this are to make things that don’t have to be displayed in case they don’t like them. My most successful gifts over the years have been breadbaskets of my own design. So far I have given about 12 of them away and everyone uses them a lot and likes them.

That is very nice Mike. In my humble opinion I have not found any greater reward in woodworking than to get the approval, praise and compliments of my family, in particular my son. My twin grandsons, age 4, will go through the house pointing here and there saying “PawPaw made this and this and this” etc. I love it!

Thanks Ancellwoodworks It’s always encouraging to have others validate your work Kepy, you must have done them really well. I was surprised that my oldest son was very complimentary about some earlier figure carvings I did, especially since he is the creative director in his own advertising firm. He normally just says “nice” in a rather unenthusiastic way when he sees my work. That gave me a big boost.

I recently started trying to carve and joined a group that meet weekly at our local senior center. Last fall, we were asked to set up a display at a Celtic Fair. I had recently been doing some Celtic knot trivets so took them to show. Had people ask about buying them so guess I must have done something right.

Thanks for the thumbs up guys. I used Linde wood which is a European wood closely related to Basswood, but perhaps a bit harder. This is a wonderful type of wood to carve in as the grain is very tight and almost invisible, plus it is very kind to edge tools as it is very soft too. The perfect carving wood for beginners and skilled professionals alike.

It’s getting better and better Mike.

I have visited Mary May’s site few time and even ordered some carving gauges from Lee Valley, they were on sale, just in case I took the plunge…
Well a severe drought hit California and the lakes are are dry(:

The tools are waiting for the right time :)

Thanks for the push.