A STORAGE SHED FOR MY BBQ GAS GRILL #5: Roofing

Laying the Shingles
Just a short update. I got the asphalt shingles for the roof. The shingle substrate is 3/4” tongue and groove panel boards on the top. The boards run from the back to the front. I left enough room on both ends for molding so the ends of the boards on the front and back could be covered.

I haven’t put on any aphalt shingles before. The info that came with them said to use a special knife to trim them with. This is a knife that has a curved blade that forms a hook. I wasn’t able to find such a knife at the store so I just used a regular utility knife. This made the job a lot harder and I suggest that if you use this type of shingle that you will be very glad to have a hooked knife. Anyway, I stayed at it and got the job done ok. Another thing that is essential in my opinion is to have a good roofing glue cartridge to stick any shingles where the adhesive they contain doesn’t stick very well. I did use it.

Usually the last row at the top edge of a normal roof has a square shingle (several on one length) which goes over the top to the other side of a regular roof. In my case the roof is a lean-to which ends abruptly at it’s peak, so instead of the square shingles I had enough of the triangle shaped shingles I had trimmed off the sides to cover the bare spots left on the next to the last row at the top and glued them in. This gave a consistent pattern all the way to the top and I’m pretty happy with it. (See Below) 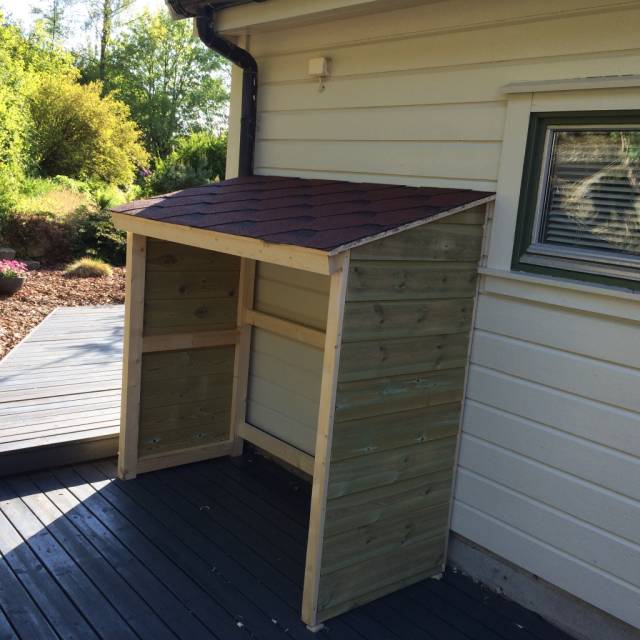 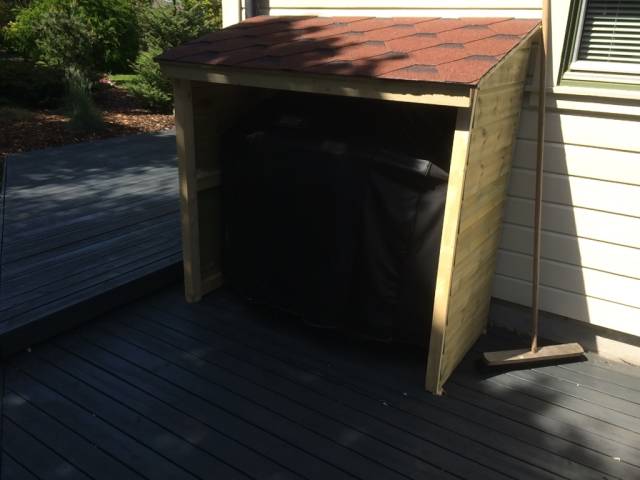 My local building supplier had only black shingles, which I bought, but I later found the red ones at another store that match my roof tile colors, so I bought those and returned the black ones.

Work yet to be done
Now I just have to build the front doors, install the hinges and bolt lock and nail on the trim. A professional carpenter could probably build this thing is in a day or two, but I am going at in my usual pace.

I hear you Mike.
The traffic is one of the main reason I moved out of San Francisco for Castro Valley. It was talking me 1h20 to drive 18 miles to work…

That’s right Abbas, no smog whatsoever and not much noise, but it gets pretty busy on the roads at rush hour. I mostly grew up in California (Culver City, Sacramento and my first house in Simi) and I am real glad to get away from all that smog and traffic. When I was a kid living in Culver City there was very little traffic except during rush hour and we could bike all over the place and down to the beach on Washington boulevard or take the tram on Venice blvd. down to Ocean park to fish, spend some time on the boardwalk or go swimming at the beach. Great memories all ruined by concrete and asphalt and too many cars and people. It all started going wrong when they ripped out the tram rails (the old redline system) and started using buses instead.

Now you ruined my day Mike :)

You mean no traffic, noise, smog, and what else?

Well at least my ears don’t freeze when I go out :)

*Madts*Yes , now that you mention it I remember that name for it. We call it a ‘pappkniv’ here, a name you are probably also familiar with.

L/W For sure. I’ve definitely decided against becoming a professional roofer.

Steve I love it here, and it’s great if you don’t mind a lot of rain and 52 F temperatures in June (this year anyway). There are many things I miss about the U.S.A., but we have a very nice and simple life here where we live in a small town surrounded by farms on the coast of the North Sea and just short drive to the mountains and fjords. The air is always clean and fresh here.

It’s looking better all the time! Aren’t you glad you didn’t have to be up another 10 feet and on your knees!

Yes Mike, that beautiful BBQ smell is getting closer. Good job on the roof tiles. I think that the knife you are looking for is also called a linoleum knife.