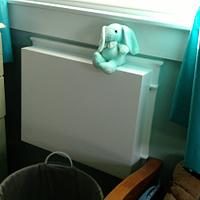 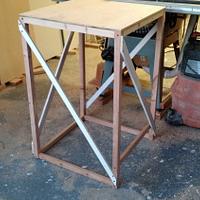 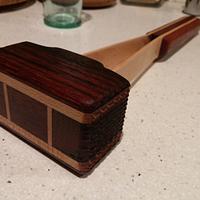 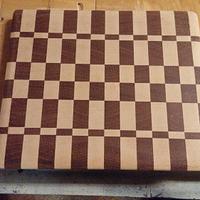 I finally did something smart. I went to the Sovereign Poospatuck Nation to buy cigarettes at 1/10th the price of the local stores here in the Soviet Socialist Republic of New York. There’s a small catch, though, which is the really low price cigarettes come loose in a zip lock bag, so I needed something to carry them in. I looked on Amazon and wasn’t too impressed with the selection so I decided to make one.

This one is made – yet again :-) – from maple and ekki cutoffs I got from work. Oh yes, I will find even more ways to dull my blades with this African super-hardwood. It’s finished with some teak oil someone left behind at work. Yes, if you haven’t figured out by now, I’m very frugal.

This is the second one I made. The prototype was 1/4" thick, which was too bulky. This one uses 1/8" thick material. It seems very sturdy even though it’s very thin. The horizontal band around the opening is a goof. I made the box by first gluing the 6 sides together and then cutting the lid after. Marking and drilling the holes for the hinge on the prototype gave me some headaches so on the second one I had a brainstorm: drill the hinge pilots before cutting the lid, which worked out great except I forgot to take the kerf into account, so when I cut the lid there was a big gap. Instead of scrapping the whole thing I decided to fill the gap with these small pieces of maple. Since it was an afterthought, it didn’t come out so great. The mitres are a little open. Not up to par, but not that noticeable when the lid is closed.

The blank was glued up with titebond. Then I ripped off a 1/8" slice, then cut the pieces (all mitred), then glued the box with polyurethane glue and “clamped” with blue tape, then cut the lid and attached the hinge. The horizontal maple was glued on with ca glue. We’ll see if that stands the test of time.

And speaking of frugal, the hinge came from a large coffee can full of hinges I picked up at a yard sale. :-) 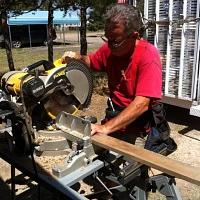 Brian, great job on the box, takes a lot of skill to build those tiny projects.
I like frugal !!

I thought it was lacewood for a second until I finished reading the text.
The maple gives it a nice contrast.
well done Brian.

Thanks. I put it up on Facebook and everyone is complaining about the hinge. Not much I can do with 1/8" thickness.

Nice work Brian, love the color and texture of Ekki. Since it so dense is there any problem with the glue holding?

I was worried about that, especially with mitres, so I used polyurethane glue.

Wooden hinge glued would probably work.
I have seen some made very thin.

one of a kind , very nice

If I do another one I’ll try a wood hinge. I wonder if I can find 1/16" brass rod at the hardware store. Hmmmm… Maybe I’ll start that today.

We’re all allowed one bad habit.