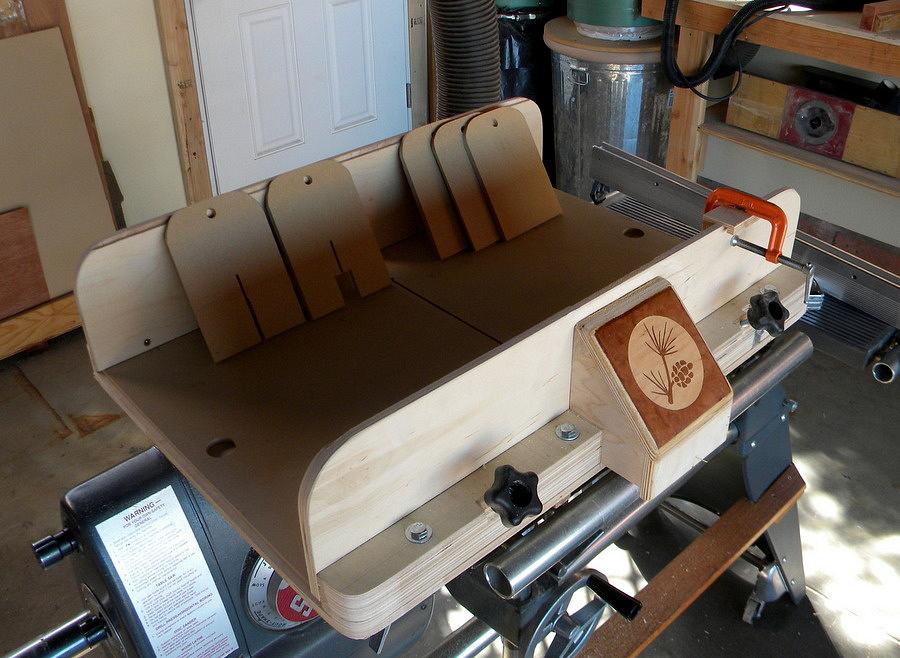 I never heard of a table saw sled before I joined woodworking forums post retirement. They just don’t show up in shipyards, likely because they are for cutting straight lines. :-)

When I did start seeing them they looked either so simple that I couldn’t see the advantage over a good miter gauge or so complex that I just wasn’t interested in going to the trouble. …. and then there’s the storage ……. I tend to make single use jigs and chuck them rather than filling my shop with them.

Soooo …. then I saw kiefer’s brilliant version and I suddenly had the urge to build one. The time was right this week when I was setting up my winter ShopSmith based shop as the table saw is everyone’s choice for the poorest function of the SS and I felt that a sled would improve this considerably.

There’s no need to go into details on this as it is all covered in Klaus’ project post complete with his “how it works” video. Suffice to say it is brilliant and works as advertised except for one tiny problem (ShopSmith’s not Klaus’) that I will deal with as a separate post. This one is about thanking my buddy for his version of the common table saw sled.

So . . . is custom marquetry required to make a sled that works? LOL Your work is always over-the-top! That’s certainly one nice-looking sled.

I love the custom details in all of your work. It’s always a step beyond…it’s inspiring for me to stop making my shop jigs out of cheap plywood.

I love the marquetry Paul.
Kiefer sled is on my list for a smaller and lighter sled.

Nice looking tools seem to work better and this is a good example of that with that marquetry logo it elevates it to another level .
Thanks for doing that Paul.